As the Fed showed a strong response to control inflation, the market moves and finds another scary buzzword that sparked the recession narrative. Today’s FA Alpha Daily will look back at how the Fed fought inflation through higher rates in the late 1940s, and also provide an assessment of the current Fed Rate hike to determine the possibility of a recession in the current market.

As markets tanked in mid-June and Fed Chairman Jerome Powell made it known that a 0.75% interest-rate hike was on the table, Google Trends searches for “Recession” skyrocketed.

The logic goes like this… If the Fed is really going to tamp down inflation, it’s going to have to force a recession right now. And we don’t just mean the recession in name only (RINO) that we are currently going through either.

After the Fed got serious about fighting inflation in 1947, the market didn’t continue to tank. It traded basically sideways for a year and a half after the Fed started raising rates. 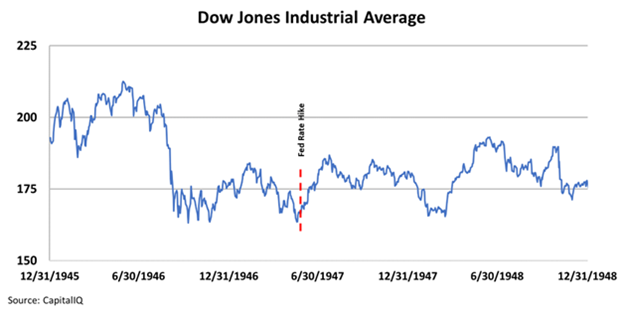 And while inflation came down, the economy didn’t come crashing down with it…

As we explained two weeks ago, inflation had occurred because of booming demand. The Fed’s actions spread out that demand and reduced inflation, rather than smothering economic spending.

The demand was still there, thanks to all that pent-up wartime saving. So, growth remained strong.

Remember, as we’ve said many times before, rising rates aren’t bad for the economy.

In reality, rate hikes mean the economy is booming… and banks and regulators are trying to temper that growth. It’s when interest rates become too high that the economy gets into trouble.

Strong post-pandemic demand in the U.S. and around the world, strained supply chains, and geopolitical tensions have all come together to create this inflation.

As we mentioned two weeks ago, the injection of $4 trillion of personal savings into the U.S. economy has helped contribute to this boom.

The strong economy is why unemployment still sits at 3.6%. It’s why corporate loan charge-offs are at historically low levels. And it’s why consumer loan delinquency rates are low as well.

The Fed’s rate hikes aren’t going to force a strong economy into a real recession immediately. The economy is doing too well for that… just like it was in 1947 and 1948.

To understand when high interest rates might bite, we can look deeper into the credit markets.

There are two big factors that turn rising interest rates into rates that are too high for the economy to bear. In short, it’s all about debt maturities and profitability.

Credit destruction is what causes a recession.

When a borrower can’t service its debt, it causes a chain reaction. People will go to the bank to see about refinancing debt, and the bank won’t be able cover the higher interest payments. So it will have to default.

After defaulting, the bank won’t spend as much. Other borrowers’ profitability will decline, and then their income won’t cover their interest expenses. Ultimately, they’ll default as well.

Credit destruction feeds on itself until it washes out.

We can tell that didn’t happen in 1947 and 1948 because of the lack of corporate defaults. And it isn’t happening now because our economy is so strong.

But if the Fed keeps raising rates, we’ll need to keep an eye out for big debt-maturity headwalls. That’s a fancy way of saying that we’re looking for times when lots of debt come due at once.

Right now, our Credit Cash Flow Prime (“CCFP”) analysis shows that the nearest U.S. corporate debt-maturity headwalls might be in 2025… or 2024 at the earliest. This means we have time to tackle inflation before companies have to make tough decisions about their debt that could create a vicious cycle of defaults.

Until 2024, cash flows alone will more than exceed all of the average company’s obligations, and debt maturities are modest. This is thanks to the wave of refinancing that happened in 2020 and 2021, when interest rates were extraordinarily low.

If the Fed can effectively moderate inflation before those headwalls start to impact the economy, there’s the chance that it could thread the needle.

Next week, we’ll explain what happened the last time the Fed faced a setup like this. Be sure to check back in for the latest installment in this series.