Last year, The Baupost Group has produced its best returns in nearly a decade. Today’s FA Alpha Daily will dissect the fund’s top holdings to see if they can continue this streak.

After The Baupost Group’s best performance in nearly a decade, we felt it was time to revisit our analysis of Baupost’s portfolio.

Seth Klarman is one of the few managers who actually managed to call his shot. Before becoming one of the best fund managers of the generation, Klarman wrote his book Margin of Safety, outlining how he planned on running his fund for sustained outperformance.

Then, he actually did it.

Below you will find our original report on what makes The Baupost Group so special, along with an updated portfolio overview and analysis of how Klarman applied his strategy during the pandemic. 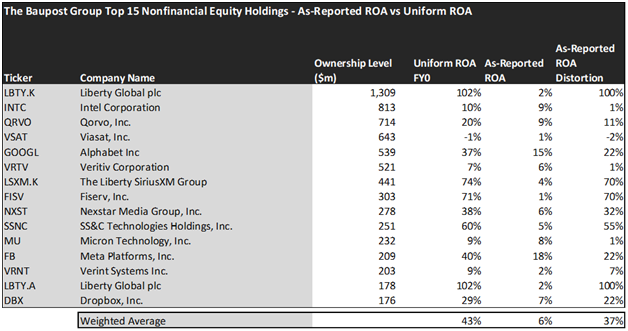 On an as-reported basis, many of these companies are poor performers with an average as-reported ROA of around 6%.

However, once we make Uniform Accounting (UAFRS) adjustments to accurately calculate earning power, we can see that the returns of the companies in The Baupost Group’s portfolio are much more robust.

The average company in the portfolio displays an impressive average Uniform ROA of 43%. This is well above corporate average returns.

Once the distortions from as-reported accounting are removed, we can realize that SS&C Technologies (SSNC) doesn’t have an ROA of 5%, but returns of 60%. SS&C isn’t a low-return business as shown by wrong data.

The list goes on from there, for names ranging from Alphabet (GOOGL) and Meta (FB), to Nexstar Media Group (NXST).

If Baupost’s investment strategy was powered by as-reported metrics, it would never pick most of these companies, because they look like bad companies and poor investments.

Once we account for Uniform Accounting adjustments, we can see that many of these companies are strong stocks that have unfairly been beaten down by occluded accounting standards. 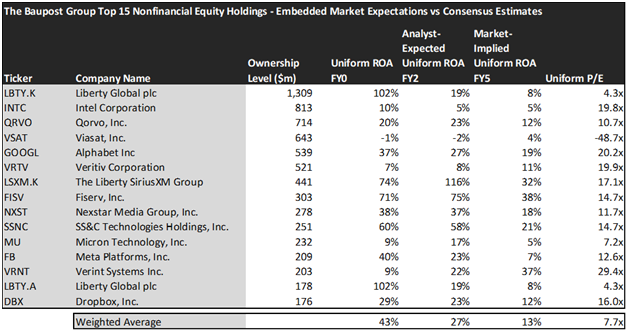 Embedded Expectations Analysis of The Baupost Group paints a clear picture of the fund. The stocks it tracks are strong, and while the markets are pricing them in for a significant drop in profitability, analysts are projecting returns to remain consistent.

While the fund is forecasted by analysts to see Uniform ROA drop to 27% over the next two years, the market is pricing in the fund to see returns fall to 13%, which may lead to upside.

In particular, there are a couple of companies that are being priced in by the market as excessively bearish.

While Fiserv (FISV) has achieved strong profitability in recent years, the markets are pricing in declines in returns. Meanwhile, analysts are projecting the company to not just maintain their returns, but improve to 75%.

Read on to see a detailed tearsheet of one of The Baupost Group’s largest holdings.

As the Uniform Accounting tearsheet for Intel highlights, its Uniform P/E trades at 19.8x, which is below the global corporate average of 24.0x, but above its historical average of 17.2x.

Low P/Es require low, and even negative, EPS growth to sustain them. In the case of Intel, the company has recently shown a Uniform EPS shrinkage of 3%.

We take Wall Street forecasts for GAAP earnings and convert them to Uniform earnings forecasts. When we do this, Intel’s Wall Street analyst-driven forecast is for EPS to compress by 39% and 2% in 2022 and 2023, respectively.

Based on the current stock market valuations, we can use earnings growth valuation metrics to back into the required growth rate to justify Intel’s $44 stock price. These are often referred to as market embedded expectations.

The company is currently being valued as if Uniform earnings were to contract by 9% annually over the next three years. What Wall Street analysts expect for Intel’s earnings growth is below what the current stock market valuation requires in 2022, but above that requirement in 2023.

Lastly, Intel’s Uniform earnings growth is below peer averages, but is trading above its average peer valuations.