Just like with GameStop, Steve Cohen is known for betting with and against his employees…does he have the right angle this time?

Citadel and Point72’s intention to provide liquidity may not be purely altruistic as the leader of Point72, Steve Cohen, is known to be a trader with and against his employees. Today’s FA Alpha Daily will feature Point72 to put into light how well he oversees his and his employees’ books.

The meme stock craze that started in 2021 was kicked off by a short squeeze on GameStop (GME). It was a David and Goliath story between retail investors united on social media against massive hedge funds.

In the midst of it all, two market titans, Citadel and Point72, chose to put money in to backstop the hedge fund at the heart of the short squeeze, Melvin Capital.

Even though it was sold to the public as a lifeline to Melvin Capital, it wasn’t a purely altruistic move.

It was cold hard calculus from established market titans.

They understood if they didn’t backstop Melvin Capital, it could trigger potential liquidity issues in other securities. Also, Steve Cohen, the head of Point72, formerly SAC Capital, had an inside track into the firm.

His reputation with the word “inside” is for having gotten a slap on the wrist for insider trading accusations before, but that’s not what we’re referring to this time. Rather, he had an inside track because he knew the head of Melvin Capital, Gabe Plotkin.

Plotkin previously worked at SAC before he started his own fund, Melvin Capital. However, there are many traders at SAC, so it’s not very impressive in its own right.

The connection is important to note because many in the industry say that what Steve Cohen is really good at isn’t being a stock market trader. It’s being a trader with, and against, his own team.

He is known for having a keen eye to understand when his employees may make a wrong call and when to back away, and when employees are locked in and have a winning idea.

With that in mind, the fact that he backed Plotkin last year during the craze might have been a sign that he had an inkling that from such a poor trade position, Plotkin could be in a good position to dig his way out.

However, now that he’s unwinding his trade in Melvin, requesting the liquidity he provided the firm, it may be a signal that he thinks the trade may have run its course.

While the Melvin Capital “trade” is a prime example of his ability to manage his employees and their books, it’s not the only one of its kind. You can get an even better window of that by looking at Point72’s book itself, and see how well he’s managing his own and his employees’ book there.

Let’s see if Uniform Accounting thinks that he’s got the right angle on the stocks in his fund. 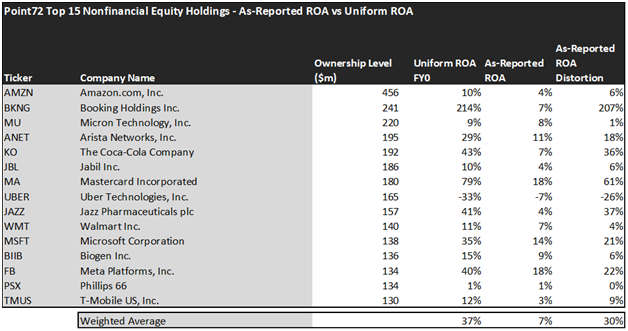 Contrary to what one might expect with the market correction in the past few months, most of Point72’s largest holdings remain in a better position than you would expect.

The average as-reported ROA among Point72’s top 15 names is near the cost of capital at 7%. In reality, though, these companies perform more like a largely profitable company, with a 37% Uniform ROA.

One of the fund’s largest investments, Booking Holdings (BKNG), for example, doesn’t return a below average 7%. It actually provides drastically stronger returns, at a 214% Uniform ROA which takes into account their strong recovery in travel from the pandemic.

Some of Point72’s other investments are also much stronger than they appear. For example, The Coca-Cola Company (KO) does not have 7% returns. Rather, as a company with a strong portfolio of products, it has a 43% Uniform ROA.

Furthermore, Jazz Pharmaceuticals (JAZZ) doesn’t have returns below cost of capital of 4%. Rather, they have strong returns of 41%. 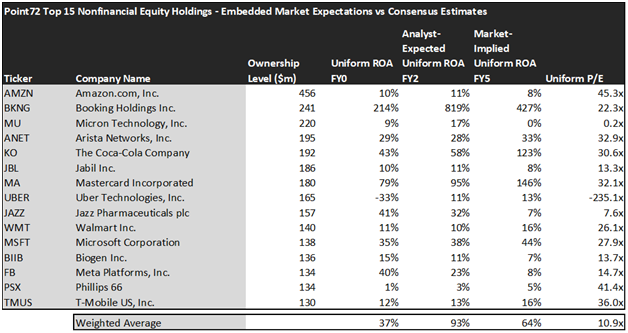 Embedded Expectations Analysis of Point72 paints a clear picture of the fund. The stocks it tracks are high growth names, but the market is failing to price in just how much they will grow.

While the market is pricing these companies to grow their economic profitability to 64%, analyst expectations have them climbing to 93%.

After a couple of challenging years due to pandemic-related headwinds, Bookings Holdings is poised to take flight with an ROA of 819% and market expectations of nearly half that at 427%.

While not as dramatic as an upswing, Micron (MU) is also poised to provide upside for the Point72 portfolio just as Bookings Holdings is expected to do. With the market implying ROA to fall to 0%, analyst expectations of 17% ROA could be another way for the portfolio to rise.

This just goes to show the importance of valuation in the investing process. Finding a company with strong growth is only half of the process. The other, just as important part, is understanding just how much more upside the company has left in them.

To see a list of companies that have great performance and future upside also at attractive valuations, the Valens Conviction Long Idea List is the place to look. The conviction list is powered by the Valens database, which offers access to full Uniform Accounting metrics for thousands of companies.

Read on to see a detailed tearsheet of the largest holding in AMZN.

As the Uniform Accounting tearsheet for Amazon.com, Inc. highlights, its Uniform P/E trades at 45.3x, which is above the global corporate average of 24.0x, but around its historical average of 44.0x.

High P/Es require high EPS growth to sustain them. In the case of Amazon, the company has recently shown a Uniform EPS growth of 47%.

We take Wall Street forecasts for GAAP earnings and convert them to Uniform earnings forecasts. When we do this, Amazon’s Wall Street analyst-driven forecast is for EPS to grow by 7% and 29% in 2022 and 2023, respectively.

Based on the current stock market valuations, we can use earnings growth valuation metrics to back into the required growth rate to justify Amazon’s $3,225 stock price. These are often referred to as market embedded expectations.

The company is currently being valued as if Uniform earnings were to grow by 22% annually over the next three years. What Wall Street analysts expect for Amazon’s earnings growth is below what the current stock market valuation requires in 2022, but above that requirement in 2023.

Lastly, Amazon’s Uniform earnings growth is above its peer averages and is trading above its average peer valuations.