Recession has become the recent buzz word among the media as big banks like Morgan Stanley (MS) and Goldman Sachs (GS) have been talking about the economy on its way to an “earnings recession.” To determine if we are truly on our way to one, we must take a deeper look. In today’s FA Alpha, we will be discussing whether an earnings recession means we are in an actual recession, and what it means for markets.

Critically, being in an earnings recession doesn’t mean that our economy is in an actual recession.

To understand why, you have to consider the factors that could lead to this drop in earnings. It’s at least partially due to the Fed raising rates as it looks to cool down the economy and slow inflation.

But there’s another key reason for this downtrend. As Morgan Stanley explained, companies over-earned in 2021.

This over-earning was a result of government stimulus packages and a historic rise in consumer demand. This situation is very similar to what happened in 1945, as we explained back in July.

GDP in 1946 surpassed what should have been possible. So, it made sense when earnings fell back to normal levels in the following years.

The Fed is trying to slow this demand in the hopes that inflation will follow suit. While this is in the economy’s best interest, it will hurt near-term company earnings.

Some would argue that the input cost and employment inflation are now starting to push corporate profits as a percentage of GDP back towards longer-run averages, which are well below current levels.

It looks like after 2021’s unsustainably high earnings, things are beginning to fall back to Earth. 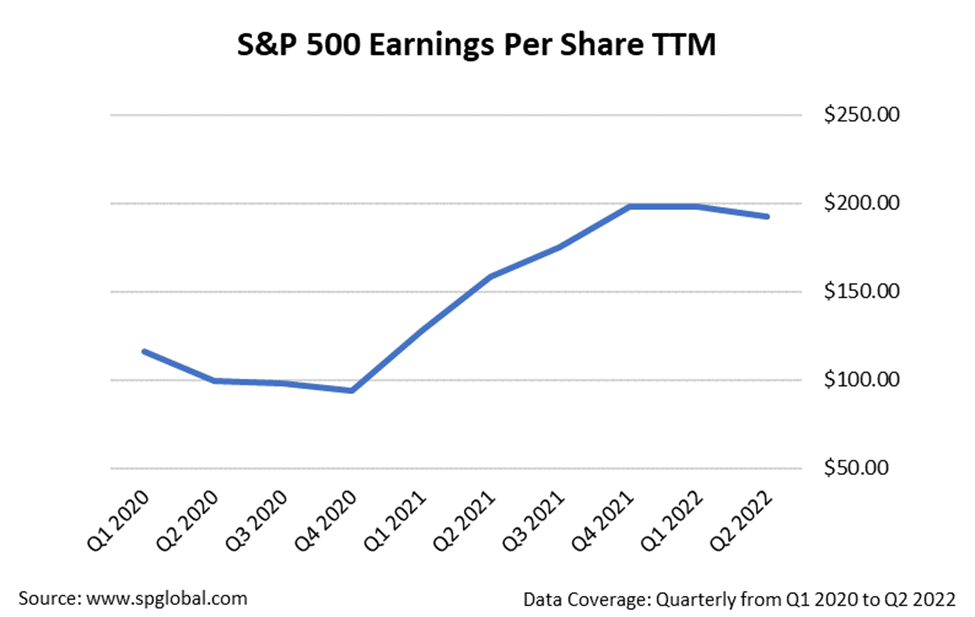 But that hasn’t been the case for the second quarter.

More than 99% of companies have reported second-quarter earnings. Earnings dropped almost 3% quarter-over-quarter, down to $192.23.

This is the first S&P 500 earnings dip in the past six quarters… since the midst of the pandemic.

And third-quarter estimates don’t look any better. Earnings are forecast to drop another 0.5% to $191.25. This decline is expected to continue through the end of the year, bottoming at $188.20 before recovering in the first quarter of 2023.

Operating earnings – earnings excluding write-offs from management – paint a somewhat rosier picture. While they also show a drop in the second quarter, they’re forecast to rebound sooner than as-reported earnings.

With earnings looking rudderless, many are concerned about what it means for the market. But that’s not what you should be focused on. It doesn’t matter whether market earnings return to growth this quarter or next year.

Even when overall corporate earnings show weakness, that doesn’t mean every part of the economy is struggling.

These two underachievers pushed the entire index down. But some pockets of the market were stronger… The energy sector’s TTM earnings increased almost $20 from the first quarter of 2021. Health care earnings rose $2.

This means for the current environment, thematic investing is more important than ever. Finding the right sectors to invest in will make the difference between outperformance, and lagging the market. In following weeks we will continue to highlight which sectors are strongest.