Tiger Global has trailblazed in the venture capital and technology race over the past ten years, but the fund lost over $17 billion with the recent market correction. Today’s FA Alpha Daily will examine the fund’s current holdings to see if Tiger Global will be able to come out of the wild.

We’ve all heard about bull and bear markets. They’re the names we give to market upturns and downturns over the course of a full market cycle.

For those that have kept a close eye on financial markets in the past couple of decades, there is another animal that gets spoken about a lot.

While Chase Coleman, the mastermind behind Tiger Global, follows the animal’s tendencies by avoiding the spotlight and operating in a lithe manner, in contrast to some of his hedge fund peers, that isn’t what we are alluding to.

Rather, it’s an ode to all of the Tiger cubs that were offsprings of Julian Robertson’s legendary fund Tiger Management.

Back in March, we talked about how the Tiger cubs, particularly Tiger Global, rode the venture capital and technology wave to new heights over the past ten years.

Just as quickly as investors’ investments ascended, they have come barrelling back to the earth, punishing investors along the way.

A recent assessment clocked their losses at over $17 billion of investors’ money, all lost in the tumult of the past few months. In fact, this represents a loss of roughly two-thirds of total gains since inception of Chase Coleman’s hedge fund.

With such drastic losses in the rearview mirror, have they pivoted the portfolio to survive better going forward? Or do they have a blind spot in their investment philosophy?

Just as one would expect from an investor that has reported such strong returns since inception, the Uniform returns are much stronger than the as-reported metrics dictate. 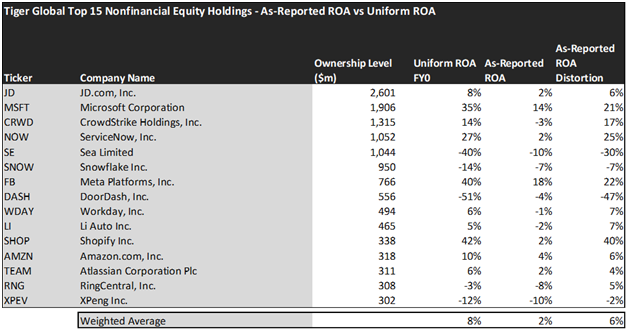 The average as-reported ROA among Tiger Global’s top 15 names is a barely profitable 2%. In reality, though, these companies are much more profitable on average, with an 8% Uniform ROA across the top fifteen.

Microsoft Corporation (MSFT) for example doesn’t have average 14% returns. Rather, it has a 35% Uniform ROA.

Similarly, CrowdStrike (CRWD), isn’t a money-losing business at a -3% ROA. Instead, the company has produced a 14% Uniform ROA.

Some of Tiger Global’s other investments are also much stronger than they appear. For example, Shopify (SHOP) doesn’t have 2% returns. Instead, they have achieved a 42% Uniform ROA. 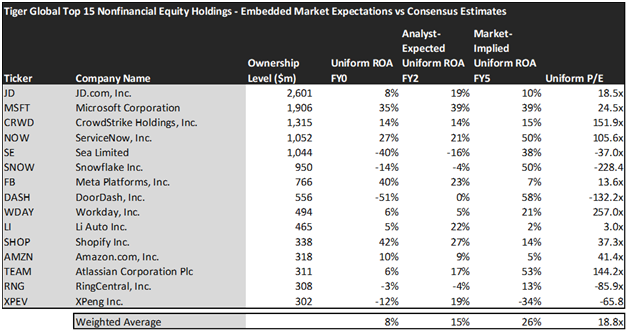 Embedded Expectations Analysis of Tiger Global paints a clear picture of the fund. The stocks it tracks exhibit strong earnings today. However, while the markets are pricing them in for further appreciation, analysts are expecting only a modest growth in profitability, which may send prices pressured even further in the future.

Even though markets are pricing Uniform ROA to grow to 26%, analysts are only forecasting returns to grow to 15% in the next two years.

In particular, there are a few names that are forecasted to see a reckoning that the market hasn’t yet priced in.

While Snowflake (SNOW) has achieved strong brand recognition among data users in recent years, analysts aren’t expecting them to become profitable just yet with a forecast of -4% Uniform ROA for 2024. Meanwhile, markets are projecting the company to not just improve their returns, but soar to 50% in the same period.

Ring Central (RNG) may similarly disappoint as the market is projecting their returns to inflect positively to 13% Uniform ROA, while analysts expect them to become even more unprofitable with a -4% Uniform ROA.

Read on to see a detailed tearsheet of one of Tiger Global’s largest holdings.

As the Uniform Accounting tearsheet for JD.com highlights, its Uniform P/E trades at 18.5x, which is below the global corporate average of 20.6x and its historical average of 45.8x.

Low P/Es require low EPS growth to sustain them. In the case of JD.com, the company has recently shown a Uniform EPS shrinkage of 42%.

We take Wall Street forecasts for GAAP earnings and convert them to Uniform earnings forecasts. When we do this, JD.com’s Wall Street analyst-driven forecast is for EPS to grow by 157% and 56% in 2021 and 2022, respectively.

Based on the current stock market valuations, we can use earnings growth valuation metrics to back into the required growth rate to justify JD.com’s $51 stock price. These are often referred to as market embedded expectations.

The company is currently being valued as if Uniform earnings were to grow by 25% annually over the next three years. What Wall Street analysts expect for JD.com’s earnings growth is above what the current stock market valuation requires through 2022.

Meanwhile, the company’s earning power is in line with long-run corporate averages. However, cash flows and cash on hand are 6x the total obligations—including debt maturities and capex maintenance. Moreover, intrinsic credit risk is 60 bps. Together, these signal low operating and credit risks.

Lastly, JD.com’s Uniform earnings growth is above peer averages and is trading above its average peer valuations.