Equity investor sentiment has been erratic due to the pandemic and the uncertainties brought about by the war in Ukraine. Today’s FA Alpha Daily will reveal John Templeton’s strategy to reap gains amidst the crisis.

Just a few weeks ago, Jason Zweig had a phenomenal column in the Wall Street Journal covering an iconic moment in investing history.

It was about a Tennessee investor in 1939 who, right after Adolf Hitler invaded Poland, called his broker and told him to buy $100 worth of every stock in the U.S. stock market that had dropped less than $1.

That investor was none other than John Templeton. He’s one of those we talk about when we teach how great investors think.

Here’s one of his most famous quotes: “The four most dangerous words in the English language are ‘this time it’s different.'”

When Hitler invaded Poland, everyone panicked. But Templeton understood it was the right time to go in the opposite direction…

Templeton ended up with 104 stocks in this portfolio, including 34 bankrupt companies. Within five years, he sold them all, quadrupling his money, as nearly all his picks ended up selling at a gain. (He also became a billionaire with his pioneering use of global mutual funds.)

So, it’s a useful reminder that the best time to invest is often when it’s the most uncomfortable.

One of the things we like to look at for sentiment is active equity investor sentiment. This tracks, in survey format, how long the market equity investors are at any given time, from zero to 200%, if leverage is being used. Amid the panic about the invasion of Ukraine, this has dropped to exceptionally low levels.

The following chart shows the National Association of Active Investment Managers’ data on investor sentiment, and the blue line shows the moving average. 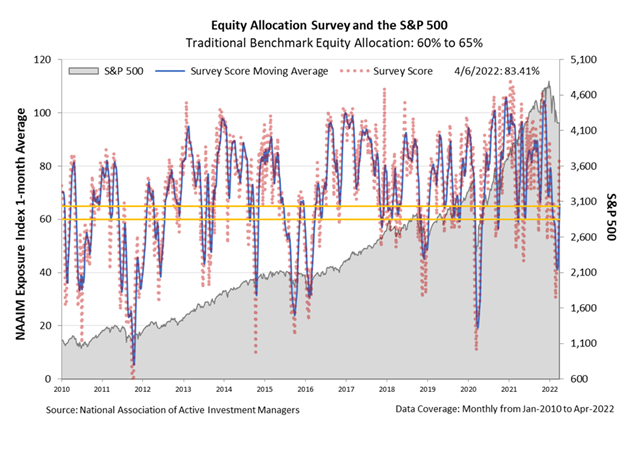 As prices increase, many have expected companies, particularly those in consumer products or restaurant brands, to see margin compression due to increased input costs.

Only what they’ve found instead is that these companies have had zero issues passing these costs along to customers. Some companies have seen margins increase because they still see plenty of customers even as they are forced to raise prices.

From this, we can see that in early 2022, sentiment fell first thanks to inflationary concerns, then fell to a low of 30% at the beginning of March, when Russia invaded Ukraine.

Sentiment has now started to creep up within the last few weeks and currently sits above long-term averages, at 83%.

This tells us that while investors aren’t overly bullish or bearish, they are trending toward bullish.

Since the pandemic, equity investor sentiment has been volatile but still elevated. After reaching very low levels in March 2020, it’s been frequently at levels approaching or above 100% starting in September 2020.

Until geopolitical concerns recently shifted this sentiment, we saw some of the most consistently bullish investor readings over the past 10 or more years.

Given the uncertainty regarding the war in Ukraine, there’s a chance that investors could grow more bearish. If that’s the case, it’s important to remember Templeton and his actions.

He didn’t panic when the rest of the market did, and in the long run, that decision proved to pay off with large gains.