Upgraded from its commercial to universal banking license, this bank with a double-A credit rating offers its own UITF…also,

Late 2021, the Monetary Board of the Bangko Sentral ng Pilipinas (BSP) upgraded Bank of Commerce (BankCom) from a commercial banking license to a universal banking license. This means the bank can offer a variety of additional products and services including investment banking services and bancassurance products.

We take a look at one of the unit investment trust funds (UITFs) offered by the bank. In addition to examining the fund’s portfolio, we are including a fundamental analysis of one of the fund’s largest holdings, providing you with the current Uniform Accounting Performance and Valuation Tearsheet for that company.

The first quarter witnessed the fastest expansion of the loan portfolios of the country’s largest banks since the start of the COVID-19 pandemic in 2020. BusinessWorld’s 1st Quarter Banking Report showed that the combined loans of 45 universal and commercial banks rose by 6% year-on-year to PHP 9.93 trillion in the January-March period, in line with the previous quarter.

The overall loan expansion has translated to income growth for Bank of Commerce (BankCom), the second most aggressive lender in the first quarter. It reported an annual increase of 17% in loans extended, tailing behind Landbank’s 25% and ahead of The Hongkong & Shanghai Banking Corp. Ltd’s 15%.

In a press release, the bank said that the earnings growth stemmed from the continued strong core business activities amidst the volatilities perturbing both local and international markets.

As we continue to monitor BankCom’s performance, let’s focus on one of BankCom’s UITFs – Bank of Commerce Diversity Dividend Focused Fund.

Bank of Commerce Diversity Dividend Focused Fund, introduced on April 8, 2015, is a peso-denominated equity fund with the objective of achieving long-term capital growth and dividend income generation through investing substantially in equity securities.

The fund is suitable for investors who exhibit an aggressive risk profile with an investment horizon of more than five years. About 90% of the fund is invested in listed preferred shares and common shares with a track record of dividend payments. 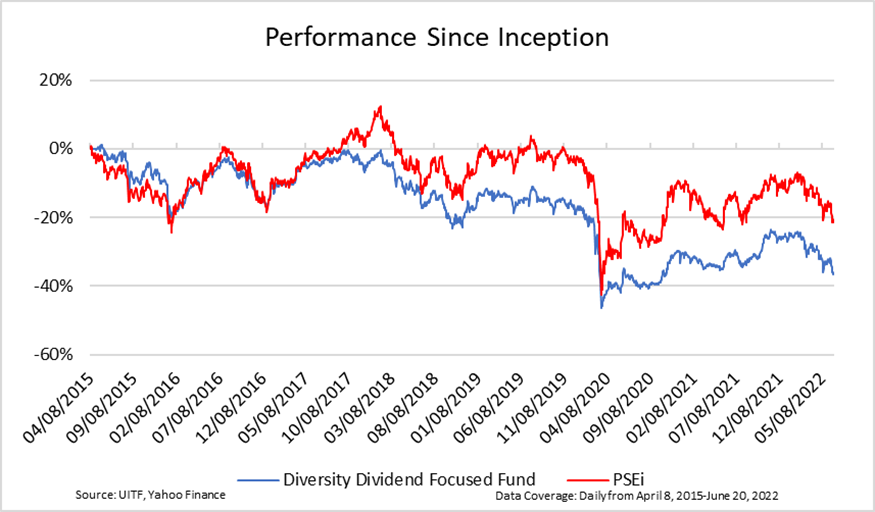 Even though the fund’s performance hasn’t been better than the market’s, it does not mean the companies in its holdings are of lower quality. As-reported metrics would have investors believe that the fund’s portfolio consists of companies that do not generate economic profit. Uniform Accounting reveals the truth behind the companies this fund invests in.

The table below shows the top seven core non-financial holdings of Bank of Commerce Diversity Dividend Focused Fund along with its Uniform return on assets (ROA), as-reported ROA, and ROA distortion—the difference between Uniform and as-reported ROA.

Most of the companies in the Bank of Commerce Diversity Dividend Focused Fund show as-reported ROAs below cost-of-capital levels, suggesting that they are not generating economic profit. Moreover, the fund is generating an average as-reported ROA of 4%, slightly lower than the global corporate average returns of 6%.

However, on a Uniform Accounting basis, this UITF’s holdings have performed similarly with an average Uniform ROA of 4%, equal to the average as-reported ROA.

As such, it should not be surprising that when analyzing the non-financial holdings of Bank of Commerce Diversity Dividend Focused Fund, the figures that easily stand out are the large discrepancies between Uniform ROA and as-reported ROA for these companies.

While at a glance, the difference between as-reported ROA and Uniform ROA may not seem that great, the distortion in percentage ranges from -445% to 119%, with Ayala Corporation (AC:PHL), Ayala Land, Inc. (ALI:PHL), and Universal Robina Corporation (URC:PHL) having the highest positive distortions.

Of these holdings, Globe Telecom, Inc. (GLO:PHL) and Jollibee Foods Corporation (JFC:PHL) were revealed to have lower Uniform ROA, presenting a potential cause for concern. Companies such as these need to be closely monitored for drastic changes that could negatively affect the fund itself, especially when the support behind the stocks’ performance begins to wane.

As-reported metrics understate the profitability of Ayala Corporation, suggesting an unprofitable firm with an as-reported ROA of 2%. In reality, this firm more closely resembles one that is breaking even, with a Uniform ROA of 5% in line with the average cost of capital. Prior to the pandemic, it consistently generated returns of at least 10% from 2005 to 2019.

Similarly, as-reported metrics understate the profitability of Ayala Land with an as-reported ROA of 3%. In fact, its Uniform ROA is at 4%. Furthermore, it has consistently generated returns of at least 7% from 2006 to 2019.

Likewise, as-reported metrics understate the profitability of Universal Robina, suggesting a decent firm with an as-reported ROA of only 5%, when this company actually has a 6% Uniform ROA. It has consistently generated returns of at least 6% over the last decade.

The market is pricing Jollibee Foods Corporation’s Uniform earnings to decline by 224% in the next two years, while sell-side analysts are projecting immaterial growth for the company’s earnings.

Overall, as-reported numbers would significantly understate the expected earnings of these companies as shown by the Uniform-adjusted sell-side estimates.

As the Uniform Accounting tearsheet for Ayala Land, Inc. highlights, the company trades at a Uniform P/E of 25.9x, above the global corporate average of 20.6x but below its historical average of 36.1x.

High P/Es require high EPS growth to sustain them. In the case of Ayala Land, the company has shown a 60% Uniform EPS growth in 2021.

Sell-side analysts provide stock and valuation recommendations that poorly track reality. However, sell-side analysts have a strong grasp of near-term financial forecasts like revenue and earnings.

We take sell-side forecasts for Philippine Financial Reporting Standards (PFRS) earnings as a starting point for our Uniform earnings forecasts. When we do this, Ayala Land’s sell-side analyst-driven forecast shows that Uniform earnings are expected to grow by 145% and 49% in 2022 and 2023, respectively.

Based on the current stock market valuations, we can back into the required earnings growth rate that would justify Ayala Land, Inc.’s PHP 28.40 stock price. These are often referred to as market embedded expectations.

Ayala Land, Inc. is currently being valued as if Uniform earnings were to grow by 12% per year over the next three years. What sell-side analysts expect for Ayala Land, Inc.’s earnings growth is above what the current stock market valuation requires through 2023.

Furthermore, the company has an earning power below the long-run corporate averages. While its cash flows and cash on hand are below obligations, it also has an intrinsic credit risk of 260bps. Together, these indicate a moderate dividend and credit risks.

Investors who don’t engage in the buying or selling of securities for a living often rely on professionals to manage their own investments within the scope of their investment policies.

Every Friday at the end of the month, we focus on one fund in the Philippines and take a deeper look into their current holdings. Using Uniform Accounting, we identify the high-quality stocks in their portfolio which may not be obvious using the as-reported numbers.