After a losing a third of its total gains through May, let’s see if this tech fund can recover

Lee Ainslie, founder of Maverick, is known for making big bets and using his know-how in tech companies. With Maverick Capital taking a beating this year due to rapidly rising rates, today’s FA Alpha Daily will investigate if the fund can get back returns similar to its golden times.

When you have conviction, the best way to win big is to bet big. That’s exactly what they taught at Tiger Management.

Tiger was among the most iconic and influential hedge funds of all time.

Even though the fund itself has been shut down since March 2000, it bred some of the most prominent funds and managers of the current generation.

Maverick Capital is no exception.

Maverick was founded by tiger cub Lee Ainslie in 1993. His approach has always involved making big bets, specifically in the tech sector.

Along with its public investments, Ainslie put his know-how in the tech industry to work and formed a venture capital arm of his fund to invest in early-stage companies.

While all these investments in tech have been bringing incredible returns for the last few years and investors were enjoying the golden times of the fund, they have taken a beating this year.

Just like Tiger Global, which lost two-thirds of its all-time gains this year, Maverick is down 32% through the end of May.

Growth is among the most important drivers for tech stocks without question, and in order to support high growth levels, companies need cheap credit.

That is why, in this current economic environment, tech stocks have been getting crushed and giving a difficult time for the funds that are heavily concentrated in this industry.

To be able to see if things are as bad as it sounds for Maverick Capital, we’re going to take a deeper look into their holdings through Uniform Accounting. 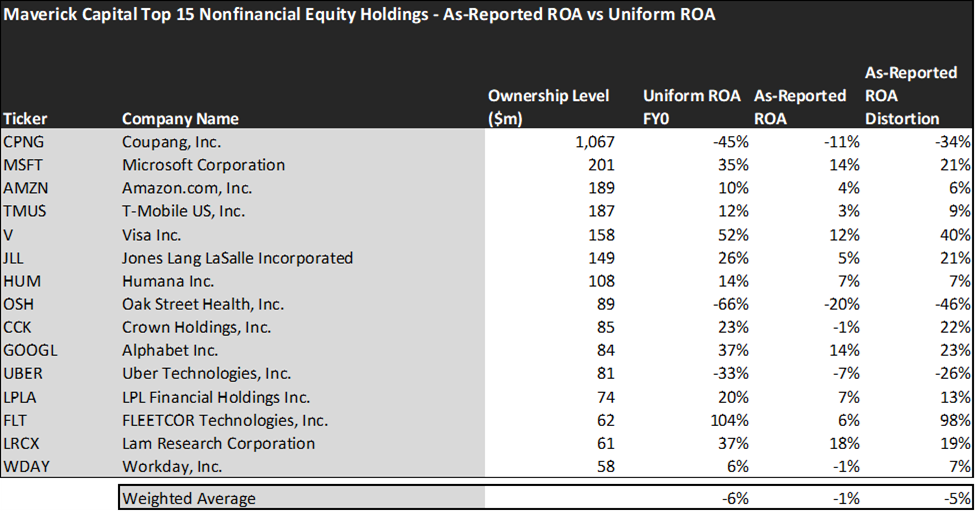 On an as-reported basis, Maverick’s holdings don’t look too bad. The fund’s average ROA is nearly profitable at -1%.

However, once we make Uniform Accounting (UAFRS) adjustments to accurately calculate earning power, we can see that the returns of the companies in the Maverick Capital, the situation is worse.

The average return is actually -6%, more steeply negative. In particular, one of the biggest distortions comes from Maverick’s biggest holding, Coupang (CPNG). Coupang doesn’t have an ROA of -11%, It has a -45% Uniform ROA.

Coupang is Maverick’s top holding by a longshot, and it’s more than three times in the red than as-reported metrics would suggest. 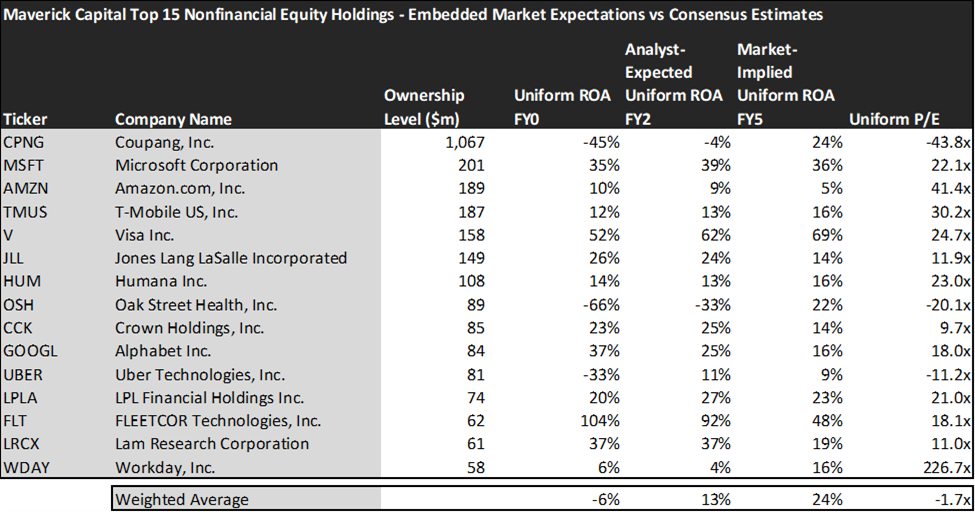 Embedded Expectations Analysis of Maverick Capital paints a clear picture of the fund. While the stocks it tracks are strong performers historically, the markets are pricing them to increase their profitability, while analysts are not that optimistic.

While analysts forecast the fund to see Uniform ROA rise to 13% over the next two years, the market is pricing the fund to see returns increase to 24% levels, which may lead to more downside risk.

The markets are expecting Oak Street Health’s Uniform ROA to rise to 22%. Meanwhile, analysts are projecting the company’s returns to increase from -66% to -33%.

Read on to see a detailed tearsheet of Maverick Capital’s largest holding.

As the Uniform Accounting tearsheet for Coupang highlights, its Uniform P/E trades at -43.8x, which is below the global corporate average of 20.6x, but above its historical average of -102.0x.

Low P/Es require low EPS growth to sustain them. That said, in the case of Coupang, the company has recently shown 96% Uniform EPS shrinkage.

We take Wall Street forecasts for GAAP earnings and convert them to Uniform earnings forecasts. When we do this, Coupang’s Wall Street analyst-driven forecast is for EPS to decline by 38% and 75% in 2022 and 2023, respectively.

Meanwhile, the company’s earning power is -45%, below the long-run corporate averages. However, cash flows and cash on hand are nearly 2x the total obligations—including debt maturities and capex maintenance. This signals a low operating risk.

Lastly, Coupang’s Uniform earnings growth is below peer averages and is trading below peer valuations.