The first public company in history was quickly followed by the first activist investor in history.

Today’s highlighted investor is following in that activist investors footsteps and his time tested approach.

Using GAAP as-reported financial metrics, the investments in this fund’s portfolio make it look like he might not be going after the right companies to create value.

Investors disagreeing with management and trying to change the business is as old as the public company itself.

Literally, the first publicly listed company in the world had an activist shareholder.

The Dutch East India Company, also known as the VOC, was the first modern publicly traded company. It was a revolutionary idea at the time.

Normally investors would finance individual trade journeys by merchants, hoping to gain on the cargo they brought home. But this brought significant risk for investors.

There was risk of disease or piracy or bad weather causing the journey to fail. And even if the cargo made it home, investors had to contend with the risk that the value of the cargo on the open market would be weaker than anticipated.

To reduce the risk for investors, and thereby reduce the cost of capital, a solution was proposed. Investors and merchants would pool their investment in one company, which would grant all investors, both active business participants and passive investors, limited liability.

If investors wanted to get out of their investment, they couldn’t force the company to buy them out. The capital contribution was permanent. Instead they had to sell their interest, or a portion of it, on an exchange created expressly for this purpose, the Amsterdam Stock Exchange.

The company could finance multiple expeditions, and also manage the volume of spices and other goods that were sold over time, to manage supply and demand. And since a single investor couldn’t force the company to change its course by pulling their capital and demanding liquidity if they disagreed, there was higher visibility too.

Or at least that was the intention.

After being pushed out of the VOC, he started selling VOC shares short, the first ever instance of a person selling a company’s stock short, betting it would go down.

He went on to file a petition raising concerns about the VOC’s corporate governance in 1609.

One of his key issues was how the company’s capital was being stewarded. The company was originally only supposed to exist for 21 years, specifically to focus on East Indies trade.

He believed that the board of directors were trying to structure the company to keep investors locked up for longer than expected originally, and to invest away from its originally stated goals.

In reality, his arguments were largely founded on his own resentment on being pushed out of the firm. But opening the conversation led to a greater revolt in 1622, where shareholders came after the board and company for questionable accounting practices.

Le Maire’s strategy of using his shareholdings to bring attention to key issues he felt needed to be resolved was the first example of shareholder activism, but certainly wouldn’t be the last.

Shareholder activism became something that most investors didn’t think much about over the next 350 or so years, until the late 1970s and early 1980s. Then, as capital markets became more open two investors began to make a name for themselves bringing it back.

T. Boone Pickens and Carl Icahn became very well known in the 1980s for being what were termed “corporate raiders.” They’d build big positions in companies and either attempt to buy them, get them sold, or otherwise try to force management to unlock value.

Icahn made a name for himself in 1985 when he took over Trans World Airlines (TWA), and then sold TWA for parts to pay down the massive leverage he took on to acquire the company.

Since then he has committed himself to numerous activist campaigns. He has blocked takeovers he felt were value destructive such as Mylan Labs’ acquisition of King Pharmaceuticals in 2004.

He sought to unlock value in companies that he viewed as being mismanaged or misunderstood by the market, like getting eBay to spin off PayPal in 2014.

He attempted to stand up for shareholder rights in the midst of Michael Dell’s attempt to take Dell private, believing the company was being undervalued.

Icahn has spent over 35 years understanding that sometimes a shareholder needs to be vocal to unlock value in a business, following the path le Maire blazed in the early 17th century.

Sometimes that activism means calling attention to how mispriced a company is, sometimes it means pushing the company to undertake a new strategy to unlock value. Icahn has used all those paths, and continues to at age 84.

Icahn’s goal is to find companies the market misunderstands and that are just not operating as well as they could be, and to help fix the issue.

We’ve conducted a portfolio audit of Icahn’s top holdings, based on his fund’s most recent 13-F.

We’re showing a summarized and abbreviated analysis of how we work with institutional investors to analyze their portfolios..

Unsurprisingly, for the most part, Icahn appears to be steering the portfolio to companies that Uniform Accounting metrics highlight are completely misunderstood by the market, and have higher potential than the market and as-reported metrics imply.

Because Uniform Accounting metrics do a better job of identifying real corporate performance than as-reported distorted metrics do, UAFRS is more likely to help explain what Icahn is seeing.

Even though Icahn is often looking to change these companies, he’s trying to find companies that are not completely worthless as is. UAFRS makes that apparent. 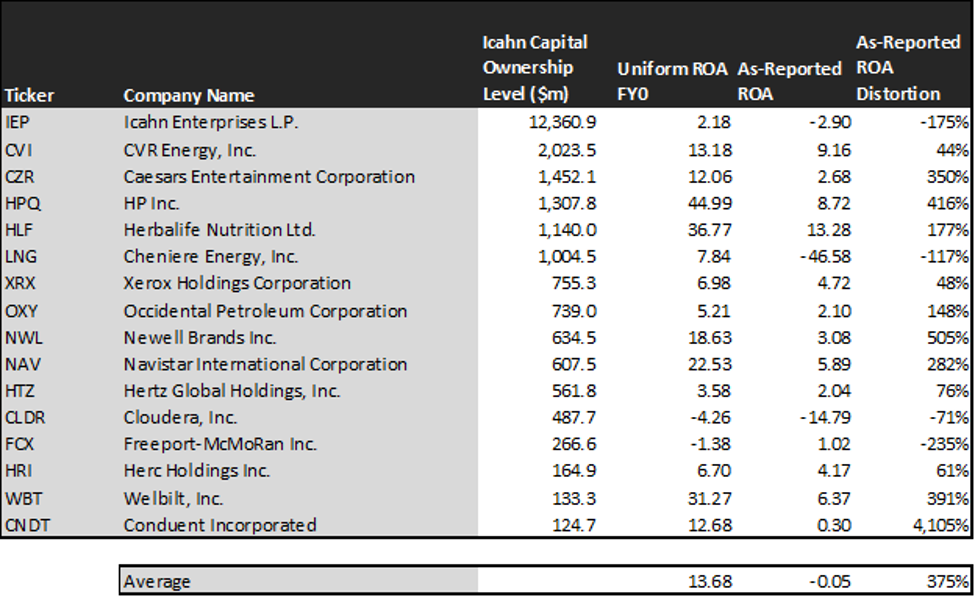 In reality though, the average company in the portfolio displays an average Uniform return on assets (ROA) at 14%. That’s slightly above corporate average returns currently.

Once we make Uniform Accounting (UAFRS) adjustments to accurately calculate earning power, we can see that the returns of the companies in Icahn’s portfolio are much more robust.

These aren’t broken down turnarounds, these are decent companies that are misunderstood, that Icahn can either help focus on improving more, or he can call attention to how they’re mispriced and unlock that value.

Once the distortions from as-reported accounting are removed, we can realize that Caesars Entertainment (CZR) doesn’t have a 3% ROA, it is actually at 12%. Caesars isn’t an underperforming dog of the casino space, it has been a big cash-generating machine for Icahn and other investors, and while returns may be volatile, Icahn sees opportunities to improve the company.

Similarly, HP’s (HPQ) ROA is really 45%, not 9%. While fundamental investors are misunderstanding the company after the corporate restructurings and spin-offs, Icahn sees a healthy, cash-generating business he can call attention to.

Navistar (NAV) is another great example of as-reported metrics misrepresenting the company’s profitability. If Icahn was paying attention to as-reported ROA, he’d think that Navistar has never seen returns above 6%, and it wasn’t a business he could unlock value in.

Navistar doesn’t have a 6% ROA, it is actually at 23%. Icahn appears to understand this is a company that can generate impressively robust returns in the right cycle.

The list goes on from there, for names ranging from Newell Brands (NWL) and Welbilt (WBT), to Conduent (CNDT), Occidental (OXY), and Herbalife (HLF).

If Icahn was focused on as-reported metrics, the fund would never pick most of these companies, because they look like bad companies and poor investments.

But to find companies that can deliver alpha beyond the market, just finding companies where as-reported metrics misrepresent a company’s real profitability is insufficient.

The average company in the US is forecast to have 5% annual Uniform Accounting earnings growth over the next 2 years. Icahn’s holdings are forecast by analysts to significantly lag that, shrinking by 2% a year the next 2 years, on average.

Icahn is finding companies that are struggling to execute on growth and pushing them to improve.

But on average, the market is even more pessimistic than forecasts imply is warranted. The market is pricing these companies to see earnings shrink by 31% a year.

While these companies are not growing, they are intrinsically undervalued, as the market is mispricing their growth by 29% on average. Even if Icahn isn’t successful, he’s got a safety net.

Even when looking at median levels, the market is mispricing these companies earnings growth by 17%.

If Icahn’s activism can drive these companies to improve their operations, or at worst, draw attention to how undervalued they are, these companies are likely to rally significantly. Without Uniform numbers, the GAAP numbers wouldn’t show this reality.

One example of a company in Icahn’s portfolio that has growth potential that the market is mispricing is Herbalife (HLF). Herbalife’s analyst forecasts have 13% Uniform earnings growth built in, but the market is pricing the company to have earnings shrink by 5% earnings each year for the next two years.

Another company with similar dislocations is Cheniere (LNG). Expectations are for market average growth of 6% growth in earnings. However the company is actually forecast for Uniform EPS to grow by 10% a year. While expectations are not low, if it can deliver higher growth, there’s more upside.

Yet another is the fund’s largest holding, Newell Brands (NWL), is priced for a 12% decline in Uniform earnings, when they are forecast to grow by earnings by 28% a year.

Unsurprising considering how for some of these companies Icahn’s plan is to make significant changes, there are a few companies in the portfolio that look misplaced.

Herc Holdings (HERC) is forecast to see Uniform earnings shrink by 46% a year going forward, however the market is pricing the company for only 7% annual earnings shrinkage.

This doesn’t look like an intrinsically undervalued company. If anything, the market looks significantly too bullish on a company breaking down.

But for the most part, Icahn’s ideas look like undervalued stocks with opportunities for a savvy activist. It wouldn’t be clear under GAAP, but unsurprisingly, Uniform Accounting and a system built to deliver alpha see the same signals.

As our Uniform Accounting tearsheet for Icahn Enterprises L.P. (IEP) highlights, IEP’s Uniform P/E trades at 22.8x, which is around corporate average valuation levels but below its own recent history.

High P/Es require high EPS growth to sustain them. In the case of Icahn, the company recently had a 41% Uniform EPS shrinkage.

As such, we use Wall Street GAAP earnings estimates as a starting point for our Uniform earnings forecasts. When we do this, we can see that Icahn is forecast to see Uniform EPS shrinkage of 201% in 2019 followed by a 30% growth in 2020.

Based on current stock market valuations, we can back into the required earnings growth rate that would justify $68 per share. These are often referred to as market embedded expectations.

In order to meet the current market valuation levels of Icahn, the company would have to shrink Uniform EPS growth by 39% each year over the next three years.

What Wall Street analysts expect for Icahn’s earnings growth is far above than what the current stock market valuation requires.

The company’s earnings power is below corporate averages, signaling that there is high cash flow risk to the company’s operations and credit profile in the future.

To conclude, Icahn’s Uniform earnings growth is lower than peer averages in 2019. Also, the company is trading below peer valuations.