The Muslim conquests following the death of Muhammad in 632 AD steadily built over the next one hundred years. The accumulation of victories began to take on an air of inevitability.

From 638-642, most of the Byzantine empire’s eastern Mediterranean holdings, including Egypt and Syria, fell to the caliphate. By 648, modern day Libya was under Muslim control. In 698, Carthage fell, and by 709, all of North Africa to the Pillar of Hercules where the Atlantic and Mediterranean meet, was the caliphate’s to rule.

Dread in Europe began to take over once the slow trudge of the conquest arrived on the shores of Europe. In 711, the invasion of the Iberian peninsula, modern day Spain and Portugal began, and by 714, most of modern day Spain was under Muslim control.

Christian Western Europe was completely unprepared to stop the advance of the Umayyad caliphate, and some worried that within the century all of Europe would be Muslim. And with reason. By 720, portions of the French riviera were under Muslim control, and in the 720s, raiding parties ranged as far as Burgundy in eastern modern-day France.

To prevent total capitulation of western Europe, the Franks needed to make a stand. Charles Martel, the Duke of the Franks, gathered his forces and came to the aid of the duchy of Aquitaine.

He had an advantage that many of the prior armies that had attempted to stop the Muslim advance did not. His was a professionally trained army that had been doing battle for years, consolidating much of northern Europe under the Franks.

In October 732, the Muslim forces were marching on Tours in central modern-day France, when they found Charles’ army in a defensive position not far from Pointers.

After 7 days of preparation and waiting, the battle commenced. The Muslim forces attempted to break the Franks, but they held until Martel’s surprise gambit paid of

He had sent a scouting party to raid the Umayyad’s camp, threatening their treasure and gains from the conquest thus far. As this information began to spread, some of the troops decided to retreat to the camp to protect their treasure, and the rest of the Umayyad army perceived this as a retreat, which soon became a self-fulfilling prophecy.

In the battle the Umayyad general was killed. The rest of the army fled back to Muslim Spain.

While many other attempts were made by the Umayyad caliphate to push deeper into Europe, the battle of Pointers, also called the Battle of Tours, marked the high water mark for Islam in Western Europe, similar to the later battle of Vienna in 1683 for Islam and the Ottomans in Eastern Europe.

That victory is the reason why 1,208 years later, when Jean-Marie Eveillard was born in Pointers, he spoke French, not Arabic. The ideas that he spread as he advanced through Societe Generale’s (SocGen) fund management group had significantly more success in crossing Europe.

Before Eveillard’s career began in 1962 at SocGen, and he took over as portfolio manager of what is now First Eagle, value investing was not viewed as a popular strategy outside of the US. Many of Graham’s followers, like Buffett, Munger, Schloss, Ruane, and even Shelby Davis, had been practitioners of value investing for years in the US, but it had not yet caught on.

For the next 40+ years, Eveillard applied the same value investing framework Graham had laid out with amazing success. He was regularly hailed as one of Wall Street’s best value investors. In 2003 he was awarded Morningstar’s Fund Manager Lifetime Achievement Award.

By that point, Eveillard’s value investing beliefs had spread across Europe. Value investing had won the war, the way the invaders of 732 had not.

One of the core principals that Eveillard lives by is that to truly find value stocks, one can’t trust the as-reported GAAP and IFRS accounting numbers. As Eveillard says:

Using as-reported accounting metrics can lead to a value investor misunderstanding how cheap a company really is. What is the real intrinsic value of a company, and what are the real assets that back that company’s value? What are the real returns of a business, and what is the market really pricing in?

Using as-reported accounting, an investor is likely to pick the wrong companies. The type of companies that guarantee you won’t have great enough success to be receive a lifetime achievement award.

To show what we mean, we’ve done a high level portfolio audit of the top 30 holdings of one of First Eagle’s funds, the First Eagle Global Fund, based on their most recent 13-F. Of course, Eveillard doesn’t actively manage this, or any First Eagle funds anymore. However the portfolio construction is still focused on his value approach, using cleaned up metrics.

This is a very light version of the custom portfolio audit we do for our institutional clients when we analyze their portfolios for torpedos and companies they may want to “lean in” on. 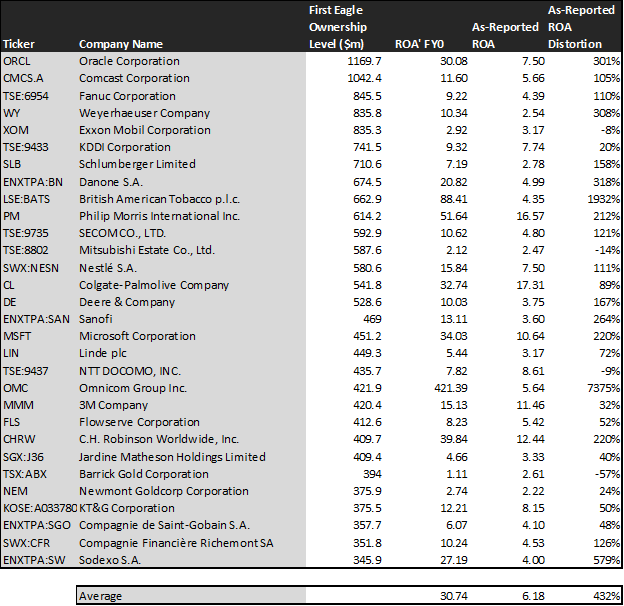 Using as-reported accounting, investors would be scratching their heads at the companies that First Eagle owns. These don’t look like the companies with good economic moats trading at intrinsic discounts that Eveillard would want to focus on.

But once we make Uniform Accounting (UAFRS) adjustments, we realize that the returns of the companies in First Eagle’s portfolio are much more robust. Once we make these adjustments, the average company has a 31% adjusted ROA, not a low 6% as-reported ROA.

Companies like British American Tobacco (LSE:BATS) don’t have a 4% ROA, they have an 88% adjusted ROA, showing robust profitability. Omnicom’s (OMC) ROA isn’t 6%, it is 421% and it has been steadily improving. Their investment in Sodexo (ENXTPA:SW) makes sense, as this company doesn’t have a 4% or below ROA, Sodexo’s ROA is really 27%.

If First Eagle was looking at as-reported metrics, they might be concerned that the accounting metrics are pointing towards poorly performing companies that should trade at discounts to book valuations, or worse. For the average company, as-reported ROA understates profitability by almost 80%. Uniform ROA is 430% higher than the distorted as-reported metrics.

That being said, there are some companies that First Eagle might be betting on that aren’t as robust as they may believe. Uniform Accounting shows these companies are poor performing companies that may not turn out to be winners.

Two that jump out are ExxonMobil, who’s adjusted ROA of 3% is in line with poor as-reported numbers. Similarly, Barrick Gold’s returns are actually lower on a Uniform basis, sitting at 1%, versus almost 3% as-reported ROA.

But Eveillard and First Eagle are value investors. The important thing to First Eagle’s portfolio managers is that they are buying company that are intrinsically undervalued first and foremost. Whether they have a healthy economic moat is second to that question.

On a Uniform Accounting EPS growth perspective, it is clear they are finding exactly the type of companies their mandate states they should. While on an as-reported basis a company like Linde (LIN) might look like earnings growth is declining, Uniform Accounting metrics show growth to be much healthier. 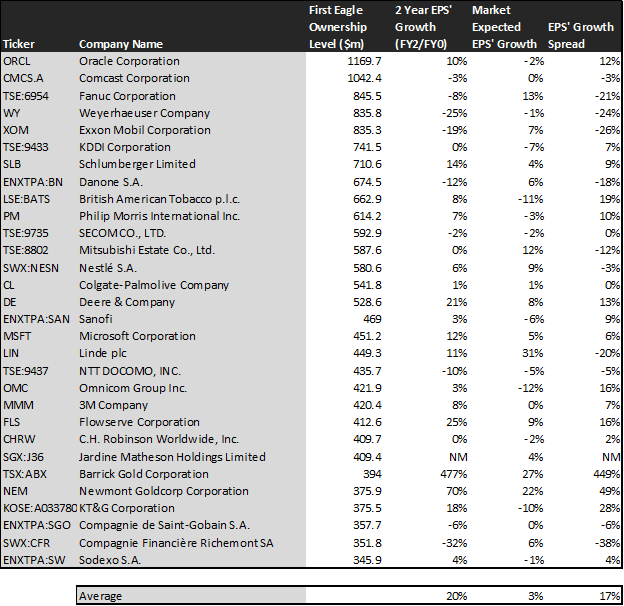 The average company in the US is forecast to have 5% annual Uniform Accounting earnings growth over the next 2 years. First Eagle’s holdings are forecast to outpace that, growing at 20% a year the next 2 years, on average. First Eagle is not just finding value companies, because of their international focus, they’re able to find intrinsically undervalued companies that still have growth characteristics.

These are the kind of companies that can make peers call an investor one of the first great global value investors.

One example of a company in the First Eagle portfolio that has growth the market is mispricing is Deere (DE). Deere is forecast to have 21% Uniform earnings growth, but the market is only pricing the company to have 8% earnings growth each year the next two years. Another company with similar massive dislocations include KT&G Corp (KOSE:A033780), with market expectations for a 10% decline in earnings, with the company actually forecast for Uniform EPS to grow by 18% a year. Yet another is the fund’s largest holding, Oracle (ORCL), which is priced for a 2% decline in adjusted earnings, when they are forecast to grow by 10% a year.

On the other hand, there are some names we’d recommend First Eagle review in their portfolio if we were meeting with their PMs. Two that jump out are Danone (ENXTPA:BN) and Fanuc Corp (TSE:6954).

Similarly, the market is pricing Fanuc to have 13% earnings growth going forward, when the company is forecast to have 8% earnings shrinkage. This doesn’t look like an intrinsically undervalued company, if anything the market looks significantly too bullish.

But for the most part, First Eagle gets it right. And they get it right because they’re not trusting the as-reported accounting statements. Their focus on understanding growth better than anyone else is likely to continue to power strong returns and our Uniform Accounting portfolio review shows it.

For any investor that buys access to the Valens Research app ($10,000/year subscription),we will include an Institutional-level portfolio audit and call with our analyst team with no extra charge.

Also, for those people who sign up to the offer before end of day today, November 1st, we’ll include lifetime access to all of our newsletters, including our Market Phase Cycle and Conviction Long Idea List (a $6,000 value), for no extra charge, for as long as you remain a Valens Research app subscriber.

To read more about the offer and sign up, you can also click here – and read about another investing great, Seth Klarman.

Today’s tearsheet is for Intel. Intel trades at a discount to the market. At current valuations, the market expectations are for negative Uniform EPS growth, but while expectations are low, the company is also forecast to see similar shrinking in earnings going forward. The company’s negative forecast EPS growth is still better than the rate forecast for most of their peers, and the company trades at a discount to their peers, with healthy returns and a safe dividend.