Unemployment provides insight into how the whole economy is running. The rate skyrocketed months ago, and now it is beginning to fall.

Today, we will investigate the unemployment data and how it is calculated to see if what it is saying about the economy is accurate.

One of the biggest developments in the labor market over the past decade has been the rise of the independent contractor. The number of Americans recorded as working in alternative work arrangements is now at 10%. Furthermore, the increased popularity and necessity of work from home has the ability to push more people into independent contracting.

In many ways, the trends in independent contracting mirror what has occurred in the media industry. Media gatekeepers are no longer as relevant for mandating who gets heard and who does not. New voices have been able to come to the forefront as the industry has changed.

In much the same way, large corporations and 9-5 jobs are no longer as necessary as they once were to employ the masses. Instead, people see the ability to have more flexibility in how they prioritize work. This gives independent contractors the ability to set their own hours and create their own jobs. However, it can be much riskier, as this arrangement erodes the safety net when contractors come on hard times.

Usually, those who are self-employed are not eligible for unemployment benefits. Luckily, for the rising number of independent contractors, since this economic crisis has been unique, the government has also responded differently.

Through the CARES Act (Coronavirus Aid, Relief, and Economic Security Act), unemployment checks have been sent to everyone, regardless of a person’s pre-pandemic type of work. This includes independent contractors who are not able to find work.

This was essential to guarantee many people were not forced into truly scary situations in the midst of the pandemic. It also had the added effect of possibly disrupting the unemployment and workforce participation rates.

The consequence of this is to truly understand unemployment. Simply counting the number of unemployment checks going out is insufficient.

Furthermore, there is uncertainty over the future of the unemployment benefits themselves. The extra $600 for weekly unemployment checks ended at the end of last month, and now many Americans are unsure of what will happen next.

The federal government handles large scale unemployment benefits. However, the Senate is on recess and not scheduled to return until after Labor Day. Moreover, the gulf between what Democrats and Republicans expect is vast. There is no indication they will be able to reach an agreement.

As the political stalemate continues, it will be necessary to monitor unemployment. The unemployment rate will provide understanding to the trend of the recovery.

As the chart below shows, unemployment sharply rose at the beginning of pandemic. As the economy shut down, many companies could just not afford to keep all of their employees. However, the sharp spike has made way to the initial steps of a recovery.

Unemployment numbers are still at elevated levels. Without a vaccine, it is plausible that they will stay high. Nevertheless, it is important to follow the rate and see where it moves going forward. It is also important to remember these levels may be artificially inflated, not just because of higher unemployment benefits, but because it includes part of the workforce that might not normally be counted. 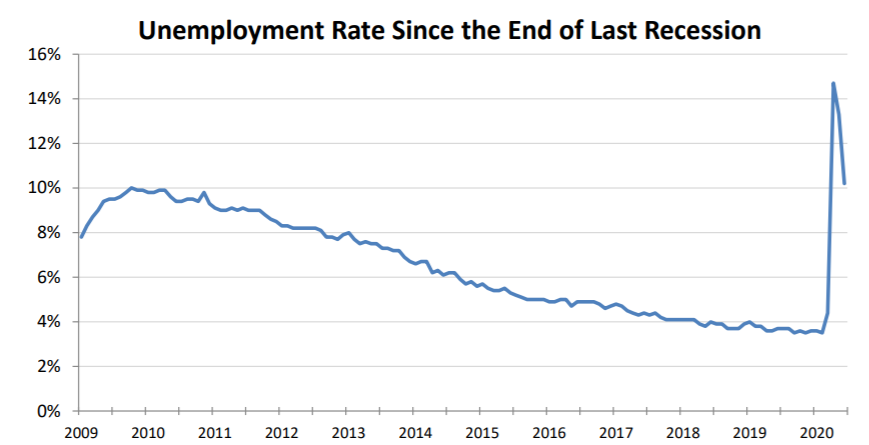 Putting this into context, the severity of the issue may not be as material as it currently appears.

Monitoring both independent contractors and unemployment overall will help investors understand how quickly the economy as a whole can continue to recover. Also, looking deeper into the calculation will be very important.