Cars can’t age forever, and this auto repair company may not be able to replicate its success following the Great Recession

Auto parts saw a surge in demand following the Great Recession. People were holding off from buying cars, instead looking to fix their existing vehicles.

Today’s firm is one of the leading sellers of auto parts. Investors are betting the pandemic will result in a surge in demand for its products, and the stock is cheap due to the previously surging economy. Uniform Accounting shows the danger in this assumption.

There are a few reasons for this rise.

The most impactful reason is continued technological innovation. Back in the 80s and 90s, Japanese cars raised the standard for car quality. In turn, American manufacturers have raised their quality as well to compete.

This was done through a focus on Total Quality Management (TQM). TQM is based on the concept of putting the customer first. It involves continuous improvement and input from all employees.

TQM was popularized by Toyota and Honda. In 1951, Toyota introduced the Creative Idea Suggestion System. This was a way for all employees to have input on company decisions and brainstorming.

Replacement cycles had been increasing for years, with particularly strong growth after the Great Recession. Average car ages grew from 10 years in 2007 to 11.2 years in 2012. Consumers were trying to stretch budgets and limit their spending.

The rise of older cars has hurt dealer networks. While service revenues increase, the bulk of their revenue comes from new car sales, which have declined due to this trend.

On the other hand, auto part sales went through the roof. As cars get older, they require additional parts to be replaced.

As the rise in age of cars has slowed after the recession, Advance Auto Parts appears to have seen its returns come under pressure.

As-reported return on assets (ROA) has fallen from 9% in 2014 to 5% in 2019. Advance Auto Parts has been hurt by the increase in new car spending and reduced need for replacement parts. 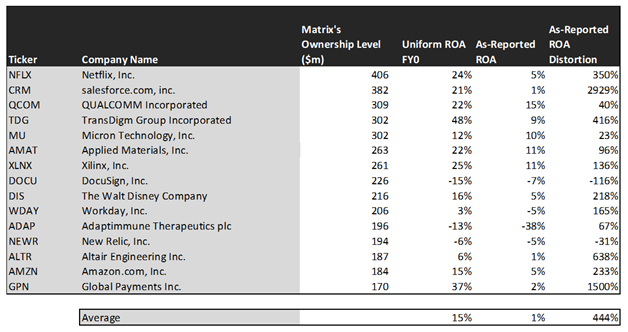 The market appears to have recognized this trend with as-reported price-to-earnings P/E falling from 17.6x in 2017 to 16.2x currently. 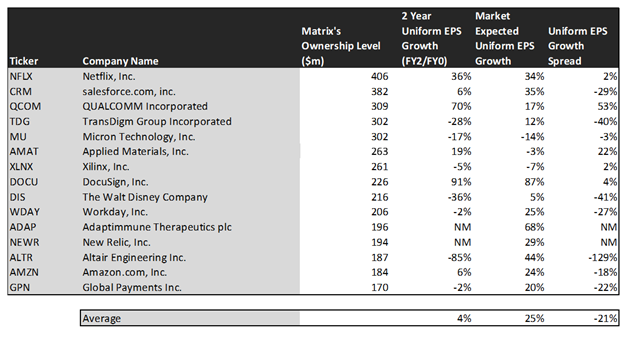 Yet looking at the firm’s Uniform P/E, valuations have gotten more expensive. Uniform P/E has risen the past three years and is now sitting at an elevated 26.0x multiple.

This is compared to the as-reported P/E of 16.2x, which has been declining in recent years. The market appears to have missed the slowing growth of aging cars, which hurts Advance Auto Parts.

Without Uniform Accounting, investors might see this as a good time to buy into Advance Auto Parts at cycle low valuations rather than as an overvalued name.

Investors may see Advance Auto Parts as an attractive opportunity. However, Uniform Accounting warns investors to stay away from a business which has been under pressure for some time.

High P/Es require high EPS growth to sustain them. In the case of Advanced Auto Parts, the company has recently shown a 17% Uniform EPS growth.

We take Wall Street forecasts for GAAP earnings and convert them to Uniform earnings forecasts. When we do this, Advanced Auto Parts’ Wall Street analyst-driven forecast is an EPS contraction of 1% and 13% in 2020 and 2021, respectively.

Based on the current stock market valuations, we can use earnings growth valuation metrics to back into the required growth rate to justify Advanced Auto Parts’ $154 stock price. These are often referred to as market embedded expectations.

In order to justify current stock prices, the company would need to have Uniform earnings grow 5% per year over the next three years. What Wall Street analysts expect for Advanced Auto Parts’ earnings growth is below what the current stock market valuation requires.

Furthermore, the company’s earning power is slightly above long-run corporate averages. Additionally, cash flows and cash on hand are 2x its obligations—including debt maturities, capex maintenance, and dividends. Together, this signals low credit and dividend risk.

To conclude, Advanced Auto Parts’ Uniform earnings growth is below peer averages, but the company is trading above its average peer valuations.