Warren Buffett has been a shrewd investor for decades.

Unlike some of his contemporaries who made their wealth on risky bets that turned out well for them, Buffett has historically focused on companies with great management and strong fundamentals.

Recent years have seen him avoid making any splashy investments because he didn’t find any opportunities that he found interesting.

The last few months have been a critical turning point, as Buffett has recently made three large investments.

As he begins to invest again, it might be a sign that he is seeing a market primed with opportunities. Read on to see if he’s still got the vision with his next round of investments.

The media, and society by extension, often laud those that take risky bets and win big.

In the finance industry, there is an investor that has made his name as one of the greatest to ever do it by doing the exact opposite.

Warren Buffett, or the “Oracle of Omaha” as he is fondly called for what seems to be an uncanny vision into future winners, is a notoriously judicious capital allocator.

While many professional investors are constantly chasing their next Moby Dick, or “whale” of an investment, Buffett takes the approach of saying no to almost every idea that crosses his desk.

Just as the analysts that pour incessant hours into preparing these ideas may feel, this cautiousness can be frustrating at times for him.

In his most recent annual Berkshire Hathaway (BRK.A), Buffett wrote that through 2021, there was “little that excites us”, in reference to his longtime business partner Charlie Munger.

It’s precisely his willingness to step back and say “no” when he doesn’t find anything interesting that makes his moves that much more meaningful.

After an extended period of stepping back from making any large moves, it seems he is finally ready to change his tune.

With interest rates rising and the markets experiencing elevated volatility from Russia’s invasion of Ukraine, Berkshire is finally making moves.

However, he didn’t stop there, as soon after, he added a large slug of equity in Occidental Petroleum (OXY).

And just yesterday, he announced a $4.2 billion stake in HP Inc. (HPQ), representing an 11% stake in the company.

Three investments of this size don’t happen every day at Berkshire, so it’s a critical sign that Buffett is finally seeing an oversold market with some interesting opportunities.

As such, it’s time we use Uniform Accounting to review Berkshire’s top holdings to see what the Oracle likes these days. 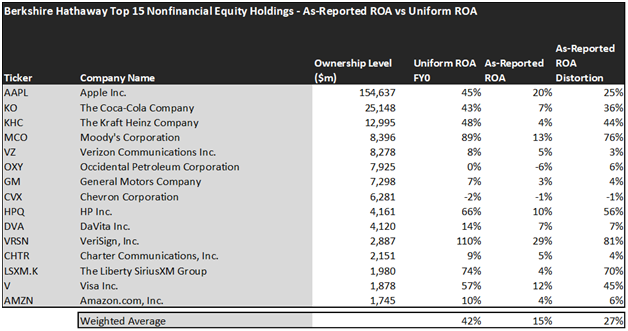 Just as one would expect from someone who is called an Oracle, Warren Buffet’s portfolio is much stronger than the as-reported metrics dictate.

The average as-reported ROA among Berkshire’s top 15 names is a solid, albeit slightly unimpressive 15%. In reality, though, these companies are massively profitable on average, with a 42% Uniform ROA across the top 15.

The Coca-Cola Company (KO), his longest-held investment, for example, doesn’t return a below average 7%. Rather, as a company with a strong portfolio of products, it has a 43% Uniform ROA.

Some of Berkshire Hathaway’s other investments are also much stronger than they appear. For example, Moody’s Corporation (MCO) does not have 13% returns. It returns 89% because its assets are much more efficient than as-reported metrics suggest.

However, it isn’t just his old investments that sparkle when examined. The Liberty SiriusXM Group (LSXM.K) doesn’t have returns below cost of capital returns of 4%. Rather, it has dramatically stronger returns of 74%.

Largely, once we account for Uniform Accounting adjustments, we can see that many of these companies are strong stocks that have unfairly been beaten down by the market. 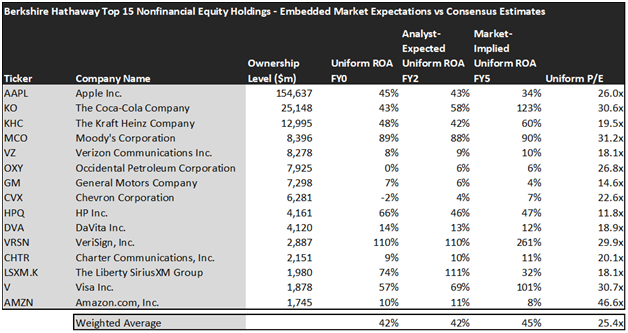 Embedded Expectations Analysis of Berkshire Hathaway paints a clear picture of the fund. The stocks it tracks are companies with strong fundamentals and robust cash flows that typically allow for high dividend payments.

Analyst expectations are pricing these companies to keep their economic profitability at 42%. Meanwhile, the market have them rising slightly to 45%.

While the portfolio as a whole appears to be accurately priced, there are still some significant distortions that could lead to massive upside or disappointment.

Some companies like Occidental Petroleum Corporations (OXY) and Verizon Communications (VZ), are very accurately stated with both analysts and markets agreeing on their Uniform ROAs.

However, the story changes once we dig into some of their other holdings.

Although The Coca-Cola company has served him very well for years, the market appears to think that it is in a stronger position with expectations of 123% versus analyst expectations of some growth to 58%.

A company like The Liberty SiriusXM Group (LSXM.K) might come in to save the day again this time though. With the market expecting returns to crash to 32%, analyst expectations of a 111% Uniform ROA provides the opportunity for a strong upside.

This just goes to show the importance of valuation in the investing process. Finding a company with strong fundamentals is only half of the process. The other, just as important part, is understanding just how much more upside the company has left in them.

To see a list of companies that have great performance and future upside also at attractive valuations, the Valens Conviction Long Idea List is the place to look. The conviction list is powered by the Valens database, which offers access to full Uniform Accounting metrics for thousands of companies.

Read on to see a detailed tearsheet of the largest holding in AAPL.

As the Uniform Accounting tearsheet for Apple Inc. highlights, its Uniform P/E trades at 26.0x, which is above the global corporate average of 24.0x and its historical average of 20.4x.

High P/Es require high EPS growth to sustain them. In the case of Apple, the company has recently shown a Uniform EPS growth of 72%.

We take Wall Street forecasts for GAAP earnings and convert them to Uniform earnings forecasts. When we do this, Apple’s Wall Street analyst-driven forecast is for EPS to grow by 7% and 3% in 2022 and 2023, respectively.

Based on the current stock market valuations, we can use earnings growth valuation metrics to back into the required growth rate to justify Apple’s $175 stock price. These are often referred to as market embedded expectations.

The company is currently being valued as if Uniform earnings were to grow by 8% annually over the next three years. What Wall Street analysts expect for Apple’s earnings growth is below what the current stock market valuation requires through 2023.

Lastly, Apple’s Uniform earnings growth is below its peer averages, but is trading above its average peer valuations.