Here at Valens, we always mention how as-reported numbers distort the true profitability of companies. A great example of how as-reported metrics mislead investors came out recently with Berkshire Hathaway (BRK.A).

An accounting concept called “Mark-to-Market” led the legendary investor to record a massive loss as the company announced its second-quarter earnings results.

Let’s have a look at the impacts of “Mark-to-Market” on Berkshire Hathaway’s profitability and see how Buffett performed using Uniform Accounting.

In addition to examining the portfolio, we’re including a deeper look into one of the fund’s largest current holdings, providing you with the current Uniform Accounting Performance and Valuation Tearsheet for that company.

Many investors are shocked as Berkshire Hathaway announced its second-quarter results with a $44 billion loss.

It sounds crazy that one of the best investors in the world lost a big lump sum in just three months.

However, this loss is not what it seems.

One of these measures was aimed at equity investments of companies to be measured at fair value through the “Mark-to-Market” method.

Mark-to-market calculates fluctuations in the value of Berkshire’s investment portfolio between the closing price of its investments in the first quarter and the second quarter.

Due to this accounting methodology, it looks like the Oracle of Omaha lost $44 billion within a quarter, as the stock market was highly volatile during that period.

However, these paper losses are in fact deceiving, as Buffett has not sold these investments yet. Yet, it is recorded as unrealized losses that directly impact the profitability of the company, all according to as-reported metrics.

Looking into the company outside of this mark-to-market adjustment, the second quarter results showed a great improvement. The company made just over $9 billion with almost a 40% year-over-year growth.

Buffett continued to do what he does best — buying the dip. He bought $4 billion more in equities this quarter and has been a net buyer of $45 billion so far in 2022.

As the legendary investor remains bullish, let’s take a look at his portfolio using Uniform Accounting and examine if he’s bullish in the right places. 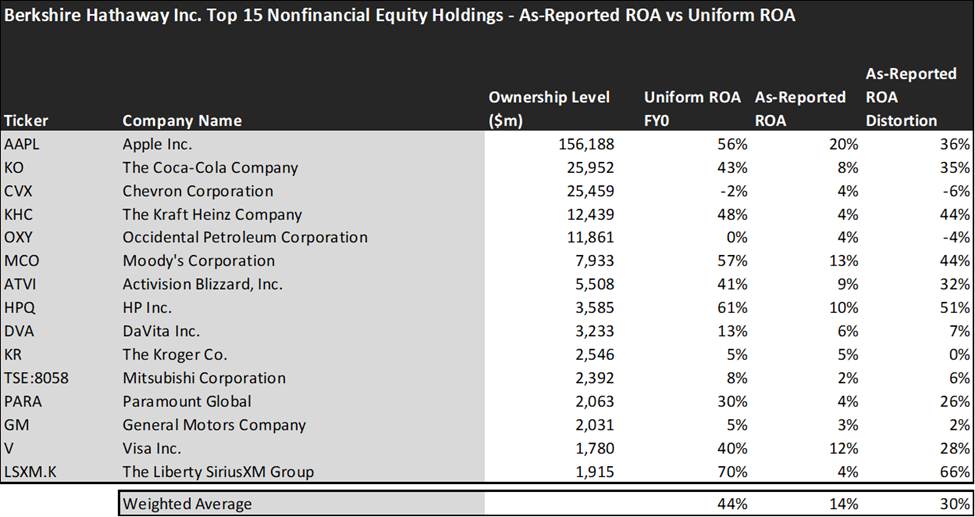 On an as-reported basis, many of these companies are average performers in terms of profitability and operating with an average as-reported ROA of just 14%, which is slightly above the corporate averages in the United States of 12%.

However, once we make Uniform Accounting (UAFRS) adjustments to accurately calculate earning power, we can see that the returns of the companies in Berkshire Hathaway are much more robust.

The average company in the portfolio displays an impressive average Uniform ROA of 44%, which is almost 4 times higher than corporate average returns.

Once the distortions from as-reported accounting are removed, we can realize that HP Inc. (HPQ) doesn’t have a ROA of 10%, but returns of 61%.

Similarly, The Liberty SiriusXM Group’s (LSXM.K) ROA is actually 70%, not 4%. The company engages in the entertainment business through its subsidiary Sirius XM Holdings.

Moody’s Corporation (MCO) is another great example of as-reported metrics misrepresenting the company’s profitability. With a Uniform ROA of 57%, an as-reported of 13% is wholly misleading and misses the story. 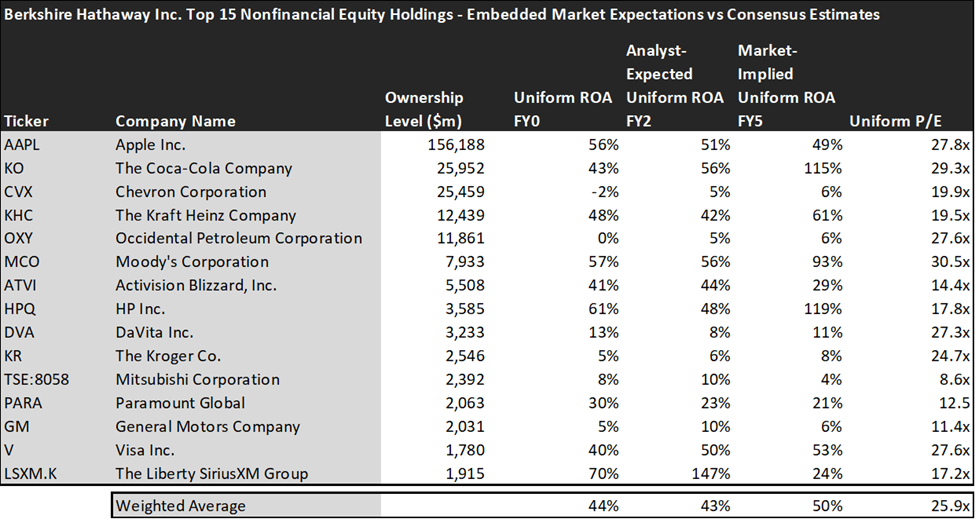 Analysts forecast the industry to see Uniform ROA increase to 43% over the next two years, and the market is also pricing the industry to see returns rise to approximately the same levels as analysts, which may imply that Berkshire’s holdings are on average being correctly priced by the market.

However, there are a couple of companies that may lead investors to be cautious.

The markets are expecting Visa’s (V) Uniform ROA to rise to 53%. Meanwhile, analysts are projecting the company’s returns to increase to 50%, perhaps disappointing investors.

The Coca-Cola Company (KO) may further disappoint investors as analysts expect their returns to slightly improve to 56% Uniform ROA, while the market expects them to increase their returns to 115%.

Even though the Q2 results show a massive loss for Berkshire Hathaway due to as-reported distortions, the portfolio is composed of historically strong performers and quality names. But to continue generating alpha, investors should always consider the valuation of the companies.

This just goes to show the importance of valuation in the investing process. Finding a company with strong growth is only half of the process. The other, just as important part, is attaching reasonable valuations to the companies and understanding which have upside which has not been fully priced into their current prices.

Read on to see a detailed tearsheet of one of Berkshire Hathaway’s largest holdings.

As the Uniform Accounting tearsheet for Apple highlights, its Uniform P/E trades at 25.3x, which is above the global corporate average of 19.3x and around its historical average of 20.2x.

High P/Es require high EPS growth to sustain them. In the case of Apple, the company has recently shown 72% Uniform EPS growth.

We take Wall Street forecasts for GAAP earnings and convert them to Uniform earnings forecasts. When we do this, Apple’s Wall Street analyst-driven forecast is for EPS to grow by 8% in 2022 and 1% in 2023.

Furthermore, the company’s return on assets was 45% in 2021, which is above the long-run corporate averages. Cash flows and cash on hand are 2.5x its total obligations—including debt maturities and CAPEX maintenance. Moreover, its intrinsic credit risk is 10bps above the risk-free rate. Together, these signal low credit risks.

Lastly, Apple’s Uniform earnings growth is in line with peer averages but is trading in well-above peer valuations.