This payroll provider has built itself into a full-service provider, Uniform Accounting shows that has made it a 50% return behemoth

This HR industry leader has been mostly thought of as a payroll company with unspectacular and unsurprisingly low returns.

Uniform Accounting shows a quite different reality. They are a company that has filled in their offerings for their clients, providing a wide variety of services that benefit their large clientele, and giving them significantly stronger and sustainable returns.

Founded by brothers Henry and Joe Taub in 1949 as Automatic Payrolls, Inc. in Paterson, New Jersey, the company started out as a manual payroll processing company for small businesses.

In 1961, they renamed the company to Automatic Data Processing (ADP). While the name changed, the focus remained around payrolls.

Over the next few decades, ADP grew by acquiring more payroll and accounting service firms and catering to a broader clientele.

Most still thought of the business as just payroll, but these acquisitions significantly expanded the company’s offerings.

They even added electronic banking to their portfolio, becoming a supplier of ATMs for banks across the country.

Other acquisitions, such as Chessington Computer Centre and Kerridge Computer Company Ltd from the UK, helped expand their operations internationally.

They targeted automotive dealer service provider BZ Results and auto marketing company Cobalt to build up their portfolio in the automotive space, before spinning those businesses and others out as CDK in 2014.

By 2017, the company had become the largest provider of HR services in North America, Latin America, Europe, and the Pacific Rim.

But despite the multitude of services, many people still view the company as “just” a payroll company. As-reported metrics appear to confirm this too.

ADP has a weak 5% as-reported return on assets (ROA). This is what is expected from a company providing a commodity. Payroll services is a highly competitive business with plenty of options in the market.

Investors looking at this data wouldn’t be surprised that ADP has such low returns considering its perceived business.

However, as we discussed, the reality is much different.

ADP is not “just a payroll” company. It is a one-stop-shop for all the human resources (HR) solutions a company needs, everything from payroll to talent acquisition and benefits management, to a platform for any other employee, and sometimes non-employee, needs a company has.

Considering the range of solutions ADP offers, it is expected that the company would be able to bundle its offerings for clients. This likely means more revenue per client, and higher margins too, as the costs are spread out.

It is also expected for a company like that to have significantly higher ROA than ADP’s lowly 5% as-reported levels.

Unsurprisingly, Uniform Accounting metrics show just that. ADP’s ROA has been consistently above 20% since 2007. In recent years, it has pushed above 40%.

The company’s expansion to different services has provided them with superior profitability, and it doesn’t look like there’s any reason for that to reverse in the near-term.

However, investors don’t appear to recognize how resilient the company’s profitability is, as the market is expecting the company’s ROA to remain muted. The market thinks ADP’s competitive advantages because of its full-service solution suite is expiring.

Management’s concerns in recent earnings calls about PEO conversion, growth outlook, and premium trends may help explain this pessimism. However those concerns appear to be about growth, not about declining profitability, and signal current muted expectations may be unjustified. 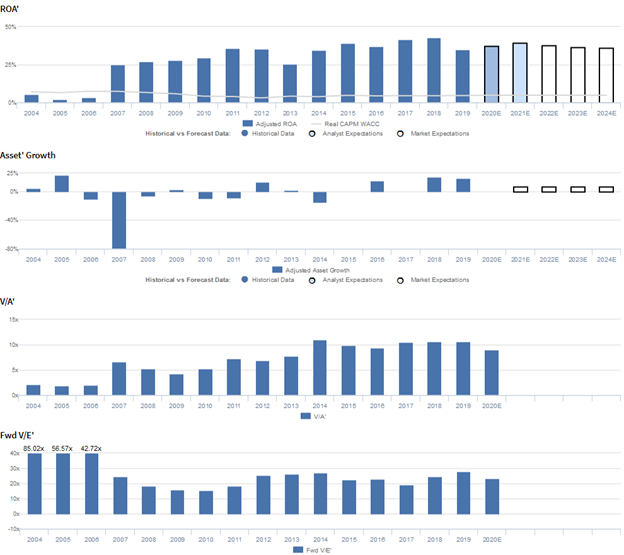 At these levels, the market is pricing in muted expectations for Uniform ROA to increase slightly from 35% in 2019 to 36% in 2024, accompanied by 7% Uniform Asset growth going forward.

Historically, ADP has seen robust, generally improving profitability. After ranging around muted 2%-5% levels from 2004-2006, following the spin-off of Broadridge Financial Solutions in 2007, Uniform ROA jumped to 25% and continued to expand to 36% by 2011.

Since then, Uniform ROA has dropped to 35% in 2019. Meanwhile, Uniform asset growth has been volatile, positive in eight of the past 16 years, while ranging from -15% to 23%, excluding 79% shrinkage from the aforementioned spinoff in 2007. 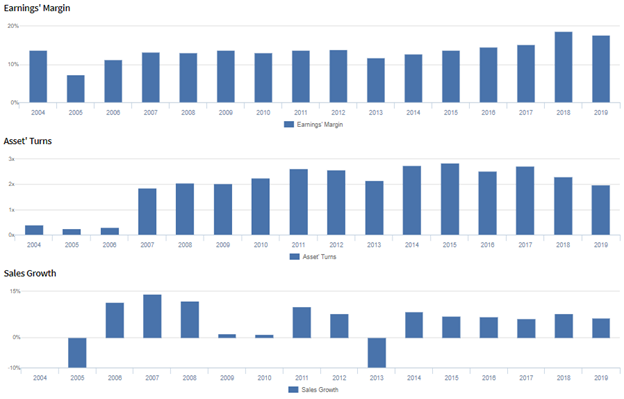 At current valuations, markets are pricing in expectations for continued expansion of Uniform earnings margins, coupled with a recovery in Uniform asset turns.

Valens’ qualitative analysis of the firm’s Q1 2020 earnings call highlights that management is confident they historically have a lot of bookings in January and that they expect stronger margin increases in the second half of fiscal 2020.

In addition, they are confident their metadata-driven design approach allows clients to tailor solutions through a drag-and-drop interface.

In addition, they may be exaggerating the functionality and accuracy of their data cloud benchmarking, and they may be downplaying concerns about potential macro pressures.

Furthermore, management may be concerned about their premium increase issues, the impact of their voluntary early retirement program, and the lack of initiatives in-place to expand margins beyond fiscal 2020.

For example, as-reported ROA for ADP was 5% in 2019, materially lower than Uniform ROA of 35%, making ADP appear to be a much weaker business than real economic metrics highlight.

Moreover, since 2007 as-reported ROA has ranged from 3%-5%, while Uniform ROA has expanded from 25% to 35% in this time frame, distorting the market’s perception of the firm’s historical profitability trends.

As the Uniform Accounting tearsheet for Automatic Data Processing, Inc. (ADP) highlights, the Uniform P/E trades at 23.2x, which is around the global corporate average valuation and its own historical levels.

High P/Es require high EPS growth to sustain them. In the case of ADP, the company has recently shown a 1% Uniform EPS growth.

We take Wall Street forecasts for GAAP earnings and convert them to Uniform earnings forecasts. When we do this, we can see that ADP is forecast to see Uniform EPS growth of 10% in 2020 and 7% growth in 2021.

Based on current stock market valuations, we can back into the required earnings growth rate that would justify $143 per share. These are often referred to as market embedded expectations. In order to meet the current market valuation levels of ADP, the company would have to have Uniform earnings grow by 8% each year over the next three years.

What Wall Street analysts expect for ADP’s earnings growth is slightly below what the current stock market valuation requires.

To conclude, ADP’s Uniform earnings growth is above its peer averages. Also, the company is trading below average peer valuations.