Aerospace & Defense is more important than it’s been in years, and this ETF stands to benefit

Russia’s invasion of Ukraine raised many concerns about geopolitical risks and security in the whole world.

The U.S. is taking precautions and is going to have a new record budget for the fiscal year 2023.

The big beneficiary of this spending will be the aerospace and defense industry. In this context, let’s take a look at the Invesco Aerospace & Defense ETF (ARCA:PPA) through the Uniform Accounting perspective.

The Russia-Ukraine war is among the most prominent global conflicts in recent history. It has sparked debate about how many countries might end up getting involved. There’s even talk about this escalating into a full-on world war.

Thankfully, this possibility seems not likely to happen for now but taking the necessary precautions is always important for the country’s safety.

As a country that spends a huge amount of money on security purposes, the U.S. is taking these precautions beforehand by increasing its defense budget.

U.S. House of Representatives passed a bill in July, which paved the way for a record-breaking defense budget of over $800 billion.

Under the Biden administration, defense spending has seriously increased and this is excellent news for the aerospace and defense (A&D) industry.

The aerospace and defense industry is the one making various aircraft, ships, spacecraft, weapon systems, and defense equipment that helps protect the U.S. and its allies.

As the industry awaits record-breaking government spending in the next year, companies are positioning themselves to better benefit from this opportunity.

On the other hand, investors are looking for ways to be exposed to the aerospace and defense industry, to ride the wave of this significant tailwind.

One of the most popular ways to be exposed to the industry is the Invesco Aerospace & Defense ETF (ARCA:PPA).

The ETF tries to capture the whole A&D industry.

Let’s have a look at the Invesco Aerospace & Defense ETF using Uniform Accounting to see how the industry is performing. 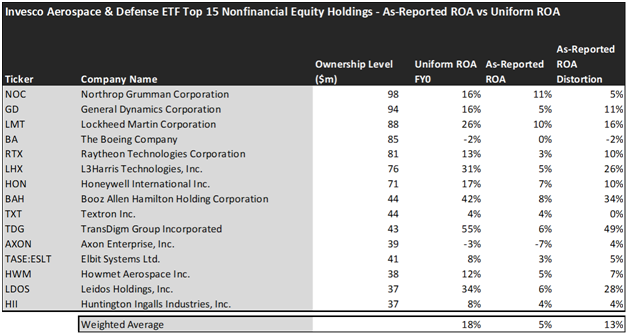 Using as-reported accounting, investors would think the aerospace and defense industry is unprofitable.

On an as-reported basis, many of these companies are weak performers. The average as-reported ROA for the top 15 holdings is 5%, which is below the U.S. corporate average of 12%, and below cost of capital levels around 6%. This implies that the defense contractors aren’t able to make a profit. Its customers are mostly governments, so this makes it seem like governments aren’t willing to reward A&D contractors.

Once we make Uniform Accounting adjustments to accurately calculate earning power, we can see that most companies in Invesco Aerospace & Defense ETF are stronger than investors might think.

As the distortions from as-reported accounting are removed, we see that TransDigm Group (TDG) doesn’t have 6% returns. It actually has a 55% Uniform ROA. 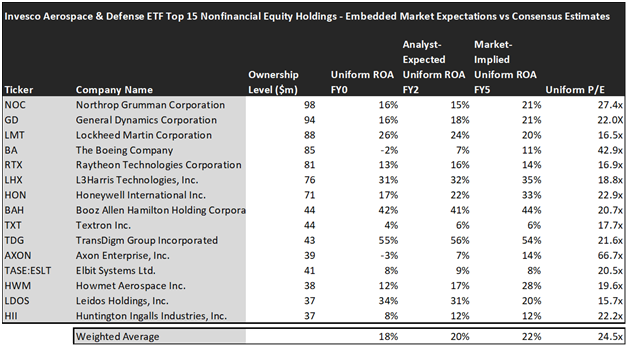 Embedded Expectations Analysis of Invesco Aerospace & Defense ETF paints a clear picture. Over the next few years, Wall Street analysts expect the companies in the ETF to slightly improve in profitability, and the market expects similar improvements.

Analysts forecast the portfolio holdings on average to see Uniform ROA rise to 20% over the next two years, while the market is pricing to see returns increase to 22%.

For instance, Raytheon Technologies (RTX) currently has a 13% Uniform ROA. Wall Street analysts think that Raytheon’s profitability could improve to 16%. However, the market already gets it. Embedded expectations highlights that the market also expects Uniform ROA to reach 14%.

Howmet Aerospace (HWM) is another good example. Its Uniform ROA was 12% in 2021. This year though, analysts expect Uniform ROA to rise to 17% but the market seems to be expecting much better performance from the company with the market-implied Uniform ROA sitting at 28%.

Overall, the portfolio consists of high-quality names which are known for their historical success and names that can benefit from record-breaking defense spending. However, before making any investment decision, investors should be careful about the valuation and analyze them accordingly.

Read on to see a detailed tearsheet of one of Invesco Aerospace & Defense ETF’s largest holdings.

As the Uniform Accounting tearsheet for Northrop Grumman Corporation highlights, its Uniform P/E trades at 27.4x, which is above the global corporate average of 18.9x, and its historical average of 23.5x.

Average P/Es require average EPS growth to sustain them. That said, in the case of Northrop Grumman Corporation, the company has recently shown -3% Uniform EPS growth.

We take Wall Street forecasts for GAAP earnings and convert them to Uniform earnings forecasts. When we do this, Northrop Grumman Corporation’s Wall Street analyst-driven forecast is for EPS to shrink by 0% and grow 5% in 2022 and 2023, respectively.

Furthermore, the company’s return on assets was 11% in 2021, which is above the long-run corporate averages. Also, cash flows and cash on hand consistently exceed its total obligations—including debt maturities and CAPEX maintenance. Moreover, its intrinsic credit risk is 90bps above the risk-free rate. Together, these signal low credit risks.