This company appears to be profiting from the shift towards renewable energy, Uniform Accounting tells a different story.

As a leading supplier of lithium and lithium derivatives, today’s company appears well positioned to benefit from the surging demand for alternative energy sources.

As-reported metrics would have you believe that this company has become increasingly profitable over the past three years thanks to this trend. True UAFRS (Uniform) based analysis reveals the firm’s real profitability trend.

Every week, it seems like Tesla passes another major car manufacturer in market cap. With no shortage of headlines in the past six months, even your grandma probably knows Tesla as the leading electric car manufacturer.

While many are focused on these headlines, Tesla would argue it is much more than a car manufacturer. While it could be viewed as an IP company as well, Tesla has made significant investments into what the company believes is the real value of its innovation. It cannot be seen unless you are willing to rip the car apart. We are of course talking about the battery that powers these cars.

Originally founded in 2003, Tesla started on its journey of creating electric cars, and more specifically the battery that goes in them, well before the electronic vehicle (“EV”) industry came into vogue. Now, after nearly 20 years of research and design and significant capital investment, Tesla is able to produce batteries at high quality and ever declining costs, helping make EVs more competitive.

With the massive surge in demand for renewable energy and EVs, this investment is paying off. Tesla now comfortably has the largest market cap of any car manufacturer at over $260 billion.

Ultimately, the accuracy of these valuations will be determined by the broader offerings that Tesla is bringing to market.

It recently began offering a home energy solution, the Powerwall, which stores the energy captured from solar panels to be used at any time in a home.

And with Tesla willing to sell its batteries to other electric car companies, battery sales could become one of its main drivers of future revenue.

Through its research, Tesla has found that lithium-ion batteries are currently the best solution for energy storage as these batteries demonstrate a unique ability to store high amounts of energy in a small amount of space, among other benefits.

And it’s not only Tesla’s Powerwall and electric vehicles that are using lithium-ion batteries. Nearly all your electronics such as phones, headphones, and laptops are using these batteries.

While there are many components that make up a lithium-ion battery, one of the most important is the lithium itself.

Lithium extraction is a very complicated process that can take anywhere from 8 months to 3 years to complete.

Albemarle is one of the industry leaders in mining and supplying lithium and lithium derivatives.

Considering the surging demand for lithium, specifically from electric car manufacturers, it’s no surprise this major supplier has seen its as-reported return on assets (ROA) rise from 4% to 5%, and even 6% levels over the past three years. 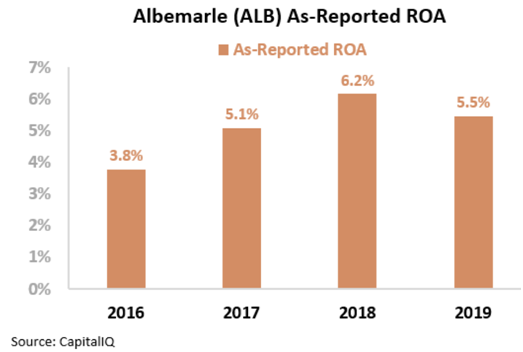 That is exactly what you would expect, a strong boost in returns as demand in the broader industry rose.

The reality is quite the opposite.

With the rising demand, Albemarle scrambled to increase capacity. This aggressive growth strategy led to Uniform asset growth of around 10% in 2017 and 2018, and as much as 28% last year.

While, intuitively, this increase in scale makes sense, this growth has actually been faster than demand expansion for its offerings.

As investment has surged, Uniform ROA has actually fallen from 14% in 2017 to 9% as of last year. Furthermore, returns are forecast to drop further to 4%-5% levels this year.

While the renewable energy space is growing, Albemarle’s over-investment has resulted in declining returns.

It’s easy to get caught in the hype of a fad industry when looking at distorting as-reported metrics, but Uniform Accounting reveals why investors are better off staying away from this name.

Albemarle Corporation Embedded Expectations Analysis – Market expectations are for Uniform ROA to fade, but management is excited about materials costs and confident about lithium 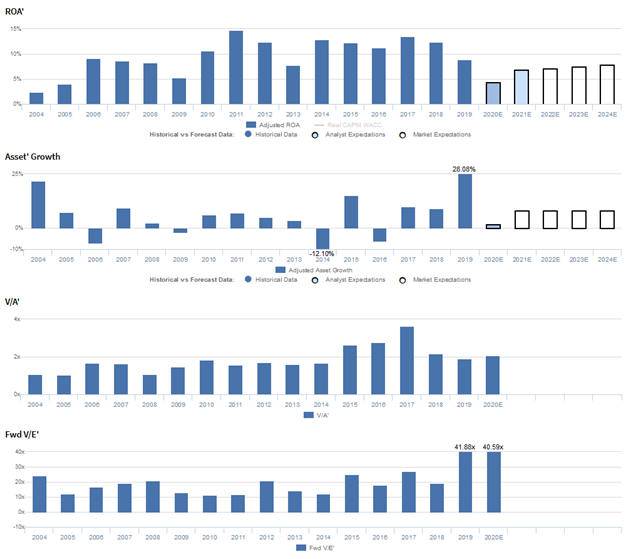 ALB currently trades near recent averages relative to Uniform earnings, with a 40.1x Uniform P/E (Fwd V/E’). At these levels, the market is pricing in expectations for Uniform ROA to fade from 9% in 2019 to 8% in 2024, accompanied by 8% Uniform asset growth going forward. 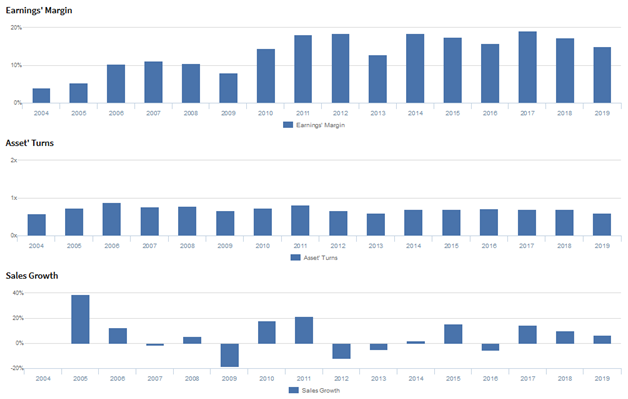 Volatility in Uniform ROA has been driven primarily by volatile Uniform earnings margin, coupled with stable Uniform asset turns. Uniform margins improved from 4% in 2004 to 11% in 2007, before contracting to 8% in 2009.

At current levels, markets are pricing in expectations for a continuation of recent declines in Uniform margins and for Uniform turns to remain near historical lows.

Valens’ qualitative analysis of the firm’s Q4 2019 earnings call highlights that management generated an excitement marker when saying they have access to the world’s lowest cost bromine and lithium, and they are also confident about the industry’s transition from lithium carbonate to lithium hydroxide.

However, they may lack confidence in their ability to execute their long-term growth strategy, sustain adjusted EBITDA growth, and maintain below peer-average injury rates.

Moreover, they may have concerns about capex spending at their China facilities and their lithium demand forecast, and they may be exaggerating the progress of their sustainable cost savings program.

As-reported metrics significantly understate ALB’s profitability. For example, as-reported ROA for ALB was 6% in 2019, materially lower than Uniform ROA of 9%, making ALB appear to be a much weaker business than real economic metrics highlight.

Moreover, since 2016, as-reported ROA has improved from 4% to 6% in 2019, while Uniform ROA has declined from 11% to 9% over the same timeframe, directionally distorting the market’s perception of the firm’s recent profitability trends.

As the Uniform Accounting tearsheet for Albemarle Corporation (ALB:USA) highlights, the Uniform P/E trades at 40.1x, which is above corporate average valuation levels and its own recent history.

High P/Es require high EPS growth to sustain them. In the case of Albemarle, the company has recently shown a 13% decline in Uniform EPS.

We take Wall Street forecasts for GAAP earnings and convert them to Uniform earnings forecasts. When we do this, Albemarle’s Wall Street analyst-driven forecast is a 63% shrinkage in 2020, before a robust 116% EPS growth in 2021.

Based on the current stock market valuations, we can use earnings growth valuation metrics to back into the required growth rate to justify Albemarle’s $82 stock price. These are often referred to as market embedded expectations.

The company needs a 7% growth in Uniform earnings each year over the next three years to justify current prices. What Wall Street analysts expect for Albamerle’s earnings growth is above what the current stock market valuation requires in 2021.

Furthermore, the company’s earning power is above the corporate average. Additionally, cash flows are above their total obligations—including debt maturities, capex maintenance, and dividends. Together, this signals low risk for their dividend.

To conclude, Albemarle’s Uniform earnings growth is below peer averages, but the company is trading above average peer valuations.