All is not quiet on the inflation front, and that could have significant implications for valuations

Inflation can affect the economy and markets greatly. Although currently below long-term averages, it is beginning to pick up, and this could have significant implications for market valuations.

Today, we will investigate the data and see how it could affect portfolios.

Towards the beginning of 2018, we started to warn our institutional clients about valuations. It wasn’t necessarily valuations in general that was concerning us, it was valuations in the context of inflation.

As we recently highlighted, inflation has a direct and tangible impact on corporate valuations. High inflation leads to lower price to earnings (P/E) ratios. These lower corporate valuations make sense because higher inflation means the difference between nominal and real gains will widen. Nominal gains are not adjusted for inflation, while real ones are. As inflation rises, any gains made have less future buying power.

During late 2017 and early 2018, inflation expectations were rising above 2% levels. The rise meant inflation was trending towards levels that could begin to put negative pressure on P/E ratios, suppressing stock prices. That was exactly what subsequently happened.

Right now, inflation is well below the levels seen in 2017 and 2018 based on a number of metrics. The 10-year breakeven rate is at 1.63%, the 5-year forward inflation expectation is at 1.76%, and the Cleveland Federal Reserve estimate is even lower at 1.34%.

These three metrics are some of the most accurate long-term inflation expectations, and all are saying inflation is relatively low.

Even the Cleveland Federal Reserve estimate of the 1-year inflation rate, which historically has stuck close to 2%, is at 1.55%. Take a look below… 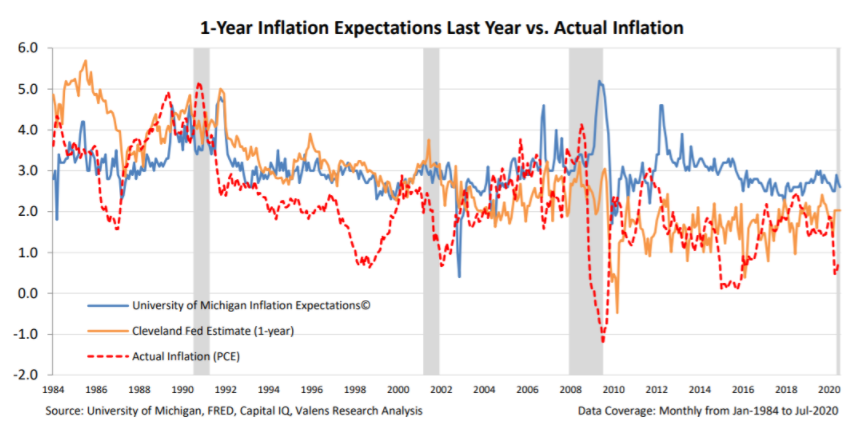 All these low expectations for inflation are allowing the market to sustain current valuations. The current market Uniform P/E is 24.3x. As the below graph shows, the Uniform P/E is greater than every other year since 2001, excluding recent high P/Es from a look-forward 2019 basis, because of low earnings for 2020.

Current inflation rates cause little concern; however, there are reasons to believe they could increase.

In addition, the breakeven rate, a market-based measure of inflation, has signaled worrying trends. After the 10-year breakeven rate plummeted when coronavirus first impacted the American economy, it has since shot back up. It then fell to a low of 0.47% in March and has since consistently climbed to its current level. If the trend from recent months continues, inflation could very well rise above 2%.

Finally, the market is not used to seeing elevated inflation for extended periods of time. The Federal Reserve has not embraced the idea ever since Paul Volcker became chairman in 1979.

The market at this point has had nearly 30 years of annual inflation holding steady below 3%. Investors may be bullish now; however, it looks like some markets are starting to realize the shift.

Bank of America (BAC) noted over the past three months, a record $1 billion dollars have flowed into inflation-protected Treasury funds.

As such, investors need to be patient and carefully consider the impact inflation could have on their portfolios. The last thing an investor wants to do now is get caught by surprise if inflation rises further.