A jack of all trades, and master of all – this company doesn’t look like your traditional semiconductor firm

What’s better than a company selling pickaxes to a competitive market?

When that company sells those pickaxes to multiple markets.

This company has found a way to diversify a business model we’ve discussed several times, giving it strong, consistent return on assets. And it does all this while being part of the semiconductor industry.

One of the themes we’ve come back to several times when looking at investments is the idea of selling picks and shovels. It’s a powerful analogy.

We wrote about the history of this idea here, when we talked about Schlumberger. A couple of weeks ago, we even talked about how this strategy can go bad if you’re focused on the wrong market.

On the other hand, this strategy can go very right if you’re focused on the right market. Or markets.

Companies that are focused on being pickaxe sellers to multiple markets are better diversified. They benefit from the same economics that we’ve discussed before. And they also benefit from lower risk because of diversification.

Applied Materials (AMAT) is one of those companies benefitting from the strategy of supplying multiple markets.

First, it is an arms dealer to semiconductor chip manufacturers. The company sells equipment used all along the chip making process.

Second, it is an arms dealer for those looking to improve their factories or “fabs.” In this business, the company offers equipment, automation software, and other supply chain solutions. Not only do customers need Applied Materials for their parts, they also need Applied Materials to build the plants where those parts get put together.

Lastly, the firm is a supplier in display markets. It manufactures products used in LCDs, LEDs, and other tech seen in TVs, computers, and smartphones. The company is diversified along the chip supply chain, and also in entirely different markets.

While some companies run the risk of being a “jack of all trades, master of none”, Applied Materials appears to have mastered all these trades.

The company’s expertise in the markets it services has resulted in significant profitability historically. In fact, since 2003, it has only seen Uniform return on assets (ROA) drop below 10% once, in 2009. Meanwhile, companies like AMD and Micron have only seen profitability rise above 10% on rare occasions.

The problem for investors is, when looking at as-reported ROA Applied Materials looks more like those companies than like the cash machine it is.

As-reported ROA just recently jumped above 10% for the first time in years. Investors would be forgiven for thinking this was just another run-of-the-mill semi company that is earning outsized earning power for a short period of time and thinking this will reverse.

That is what investors do appear to expect. Applied Materials is even trading at a discount to AMD and Micron. The market clearly doesn’t think of this as a strong company.

Over the long-run, it looks like investors are going to need to catch up with reality.

However, while it is easy to make the case that the market doesn’t understand Applied Materials, there may be headwinds to this translating to upside.

Specifically, management sentiment points to possible headwinds for the business. The team appears concerned about the strength of end markets in particular. Even diversified, this doesn’t risk-proof the company.

They also appear concerned about headwinds to growth in China. Even the best executors sometimes face competitive pressures.

In fact, Applied Materials might face those competitive pressures from more pure-play providers. The company might be in an environment currently where benefits of diversification actually hurt it for the time being. It might face issues in taking share from niche competition.

Under Uniform Accounting, it is clear that Applied Materials is a great company. However, these issues, and management sentiment, suggest it might not currently be a great investment.

Applied Materials, Inc. Embedded Expectations Analysis – Market expectations are for Uniform ROA declines, and management may be concerned about market share, growth, and their backlog 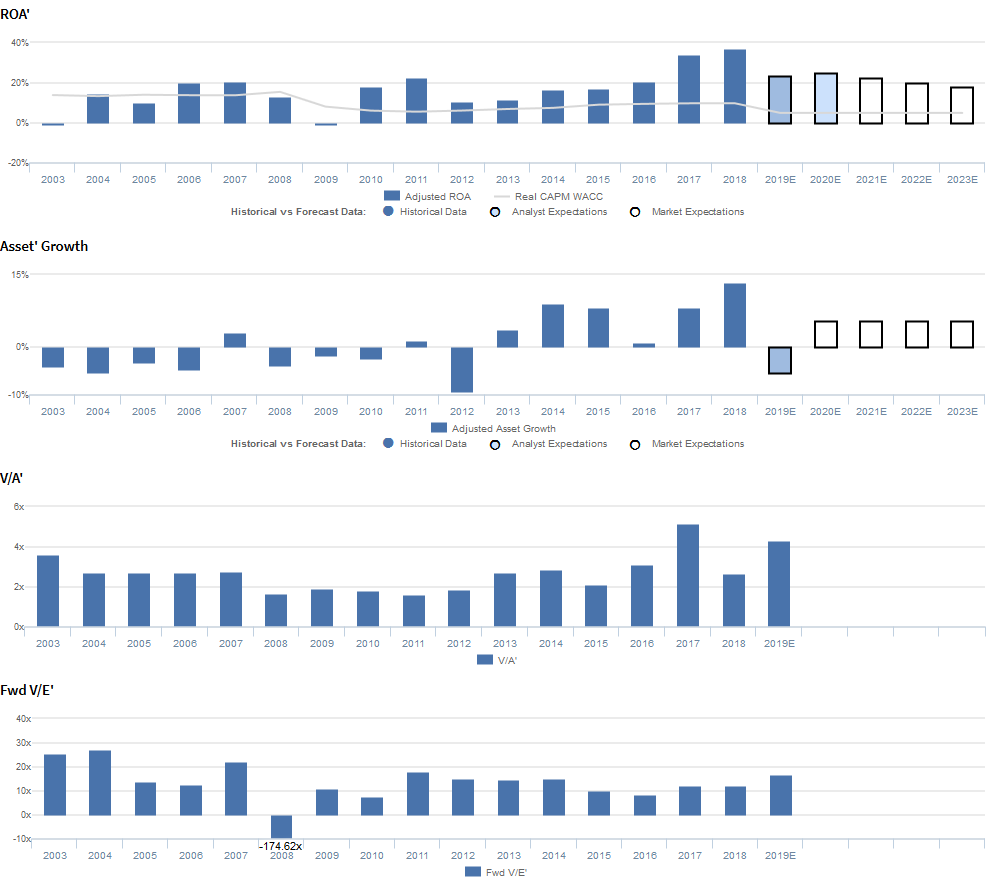 At these levels, the market is pricing in expectations for Uniform ROA to compress from 37% in 2018 to 18% in 2023, accompanied by 5% Uniform asset growth going forward.

Analysts have similar expectations, projecting Uniform ROA to decline to 25% in 2020, accompanied by 5% Uniform asset shrinkage.

Historically, AMAT has seen cyclical, but generally improving profitability. After expanding from -1% in 2003 to 20% in 2007, Uniform ROA collapsed to negative levels in 2009, amidst recessionary headwinds, before rebounding to 22% in 2011.

However, following their acquisition of Varian Semiconductor, Uniform ROA dropped to 10% in 2012, but has since expanded to a peak of 37% in 2018. 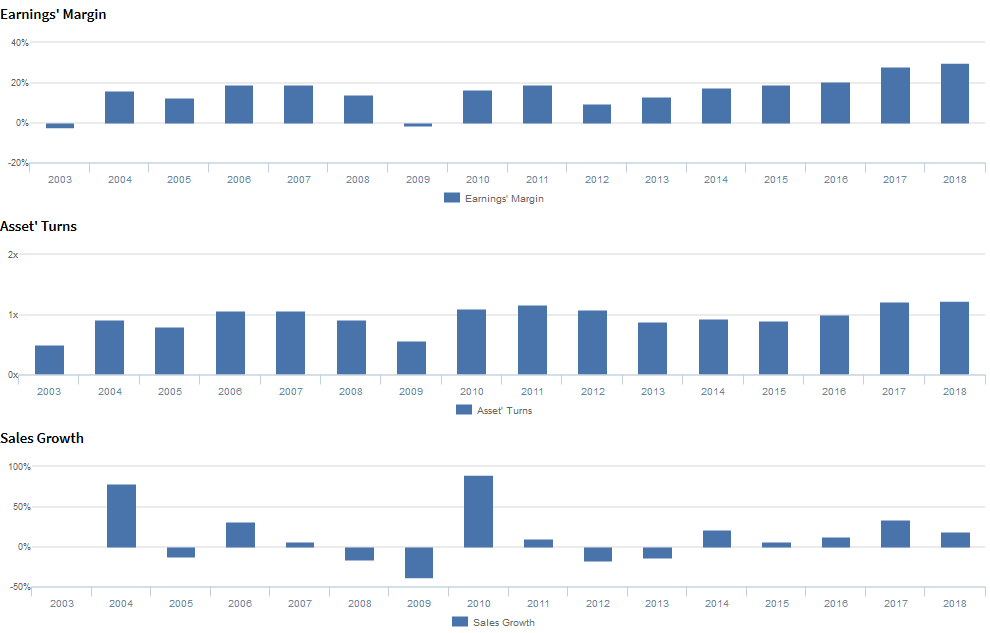 Volatility in Uniform ROA has been driven by trends in both Uniform earnings margins, and to a lesser extent, Uniform asset turns.

At current valuations, markets are pricing in expectations for a reversal of improvements in both Uniform earnings margins and Uniform asset turns.

Valens’ qualitative analysis of the firm’s Q4 2019 earnings call highlights that management is confident their Q1 2020 revenue will be up to 9% year-over-year.

However, they may be concerned about the strength of the semi equipment and services market. They may also be exaggerating the scope of growth drivers in the electronics industry.

Furthermore, they may lack confidence in their ability to gain market share in China and fully fund their profitable growth opportunities.

Finally, they may lack confidence in their ability to execute on their long-term service agreements, and they may be concerned about the strength of their backlog.

For example, as-reported ROA for AMAT was 16% in 2018, less than half Uniform ROA of 37% that year, making AMAT appear to be a much weaker business than real economic metrics highlight.

Moreover, as-reported ROA has been approximately half of AMAT in each year since 2011, distorting the market’s perception of the firm’s profitability trends for over half a decade.

As the Uniform Accounting tearsheet for Applied Materials, Inc. (AMAT) highlights, the Uniform P/E trades at 16.8x, which is below the global corporate average valuation levels, but above its own recent history.

High P/Es require high EPS growth to sustain them. In the case of Applied Materials, the company has recently shown an 35% Uniform EPS growth.

We take Wall Street forecasts for GAAP earnings and convert them to Uniform earnings forecasts. When we do this, Applied Materials’ Wall Street analyst-driven forecast is -37% into 2019. That rebounds with 15% growth in earnings from 2019 to 2020.

Based on current stock market valuations, we can back into the required earnings growth rate that would justify $56 per share. These are often referred to as market embedded expectations. In order to meet the current market valuation levels of Applied Materials, the company would have to have Uniform earnings shrink by 9% each year over the next three years.

To conclude, Applied Materials’ Uniform earnings growth is below peer averages. Also, the company is trading at below average peer valuations.