With profit margins that are capped at exorbitant rates, this firm has achieved phenomenal returns that demonstrate that Warren Buffett may have entered the wrong insurance business.

While as-reported ROA looks consistently muted for the name, TRUE UAFRS-based (Uniform) analysis shows that, as a result of favorable industry regulations, this company has been able to produce robust, albeit cyclical, profitability.

However, management appears to be concerned about their investments, their ability to integrate data to drive profitability, and growth. This means that while market expectations for a secular decline appear overly pessimistic, the market may have no reason to change its opinion in the near-term.

Warren Buffett has long been known for his interest in insurance companies.

From Berkshire Hathaway’s purchase of the National Indemnity Company in 1967 to its purchase of GEICO in 1996 and General Reinsurance in 1998, Buffett’s firm has repeatedly increased its exposure to the industry.

But why is insurance such an interesting investment to him? For starters, insurance makes money in two ways.

The first is fairly intuitive. If an insurance company can take in more money in premiums than is paid in claims, then it will be operating under what is known as an “underwriting profit”.

This is incredibly hard to do, as insurance competition is fierce, and premiums received are often not enough to cover eventual payouts. Thus, many traditional insurance firms aim to obtain an operating margin of 0%, and often, they operate at an operating loss.

These firms are able to do so because of their second way of making money.

It is known as float. As Buffet states in his 2002 Berkshire Hathaway Shareholder Letter, float “arises because premiums are received before losses are paid, an interval that sometimes extends over many years”.

In the meantime, the insurer is free to invest the money, and keep the profits. The float almost acts like an interest-free loan.

Although many insurers invest their float in low-risk investments to sustain their operations, Buffett has taken a different route. He has used this float to invest in equities and acquire other companies, which has spurred enormous long-term returns.

However, Warren Buffett is in the wrong insurance business.

This difference is massive, and leads to significant additional free money health insurers have to invest every year. This discrepancy between health and other traditional insurers is just one of the many reasons why so many people are calling for US healthcare system reforms.

But when looking at leaders in this space using as-reported metrics, you may not know these businesses are phenomenally profitable.

For instance, take Anthem (ANTM), the aggregator of the Blue Cross Blue Shield insurance companies, and among the largest healthcare insurers in the United States.

As-reported metrics portray Anthem to historically be a near cost-of-capital business, with an as-reported ROA ranging from 5%-6% since 2008, and currently sitting at the low end of that range.

Investors could be tricked into thinking that Anthem is a stable and mature business that has been unable to realize tailwinds from a historic bull-run. At first glance, it fits the bill as a boring insurance company.

However, when using Uniform Accounting, investors can see a different picture. Profitability has been significantly more robust than as-reported metrics suggest, with a Uniform ROA ranging above 13% since 2008, and recently climbing to 18% in 2018. And Anthem is not the only health insurance company with these strong returns.

Uniform Accounting also shows that the firm’s returns are fairly cyclical, and not stable, as as-reported metrics suggest.

Investors seem to recognize that ANTM is a strong return business with some secular headwinds. At current valuations, markets are pricing in expectations for Uniform ROA to contract from 18% in 2018 to 14% in 2023 accompanied by 4% Uniform Asset growth.

Considering the company’s past cyclicality, a regression in Uniform ROA appears to make sense, and management’s negative sentiment makes it seem likely that recent improvements in profitability may not persist.

Specifically, management appears to be concerned about their investments into their offerings, their ability to integrate data to drive profitability, and the sustainability of growth in their Medicaid and Medicare businesses.

Anthem, Inc. Embedded Expectations Analysis – Market expectations are for Uniform ROA to contract, and management may be concerned about their investments, data integration, and Medicare/Medicaid 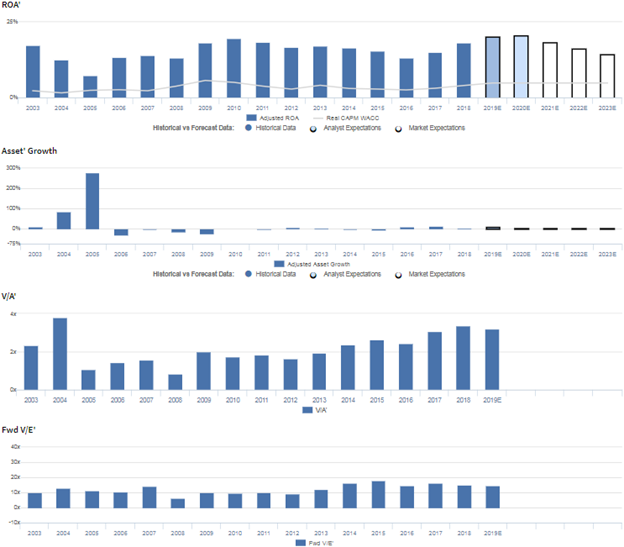 At these levels, the market is pricing in expectations for Uniform ROA to contract from 18% in 2018 to 14% through 2023, accompanied by 4% Uniform Asset growth going forward.

Meanwhile, Uniform Asset growth has been volatile, positive in just nine of the past 16 years, while ranging from -31% to 85% since 2003, not including outlier 280% growth driven by Anthem’s acquisition of Lumenos in 2005. 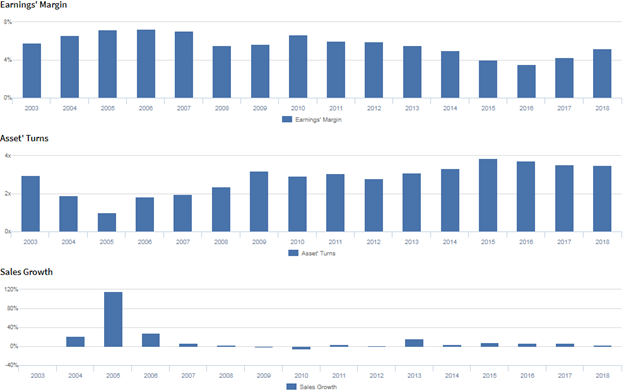 Cyclicality in Uniform ROA has been driven by the firm’s cyclical Uniform Earnings Margins, while overall improvements in profitability have been driven by expanding Uniform Asset Turns.

At current valuations, markets are pricing in expectations for Uniform Margins to reverse its positive trend, paired with a continued reduction in Uniform Turns.

Valens’ qualitative analysis of the firm’s Q3 2019 earnings call highlights that management may lack confidence in their ability to sustain growth in their risk business, and they may be overstating the value customers derive from their electronic personal health record.

Furthermore, they may lack confidence in their ability to invest efficiently into their offerings and integrate data to drive profitability.

In addition, they may be concerned about the sustainability of earnings improvements driven by lower cost of goods sold, and they may lack confidence in their ability to sustain membership growth in their Medicaid and Medicare business.

Finally, they may lack confidence in their ability to meet their full year operating cash flow guidance, and they may be exaggerating expectations for the 2020 Medicare selling season.

For example, as-reported asset turns for ANTM was 1.3x in 2018, materially lower than the Uniform Asset Turns of 3.5x, making ANTM appear to be a much weaker business than real economic metrics highlight.

Moreover, as-reported asset turns have stayed near 1.3x from 2008 to 2018, where Uniform Asset Turns have improved from 2.4x to 3.5x in the same period, significantly distorting the market’s perception of the firm’s recent asset efficiency.

As the Uniform Accounting tearsheet for Anthem, Inc. (ANTM) highlights, the Uniform P/E trades at 14.5x, which is below the global corporate average valuation levels, but around its own historical level.

High P/Es require high EPS growth to sustain them. In the case of Anthem, the company has recently shown a 33% Uniform EPS growth.

We take Wall Street forecasts for GAAP earnings and convert them to Uniform earnings forecasts. When we do this, Anthem’s Wall Street analyst-driven forecast is 29% into 2019. That rebounds with 14% growth in earnings from 2019 to 2020.

Based on current stock market valuations, we can back into the required earnings growth rate that would justify $292 per share. These are often referred to as market embedded expectations. In order to meet the current market valuation levels of Anthem, the company would have to have Uniform earnings shrink by 3% each year over the next three years.

To conclude, Anthem’s Uniform earnings growth is above peer averages. Also, the company is trading at below average peer valuations.