Apple is making moves to envelop another industry

The FinTech industry in recent years has rapidly advanced, allowing companies to create innovative ways to make traditionally inaccessible services more accessible. With so much success, the industry has rightfully had large swaths of inflows, and the Global X FinTech ETF has been one of the most effective ways to track the industry.

However, the industry got a shock earlier this week as Apple made news about entering the financial technology space.

With such a big player coming into the space, investors in the FinTech space are rightfully worried so let’s see what the Uniform numbers say about the quality of these companies and if Apple is right to be going after the space.

The FinTech space in recent years has soared to new heights as money and technology have intersected to revolutionize traditional processes.

After creating media giants, and making other existing processes smoother, software engineers have instead set their sights on creating better and more accessible financial services.

Some of the most prominent examples of these industries include payment processors, banking services, and trading platforms.

But the list doesn’t stop there. And neither do the surprises.

FinTech certainly got a shock earlier this week on Apple’s (AAPL) news that it isn’t just processing payments on its platform, or even going out on its own without Goldman Sachs by becoming a bank.

Rather, it is now going into the buy now, pay later space.

As Apple has done for years now, they have surveyed the financial technology space over the past ten years and have identified this industry as an area of massive opportunity.

As more and more commerce revolves around mobile phones, this has become an area of massive untapped potential.

While this news is great for owners of iPhones and technology in the Apple ecosystem, as well as investors of Apple itself, it has one group of investors very worried.

The ones worrying are those that have been betting that fintech innovators were going to disrupt the financial system and start a revolution.

And instead, Apple is effectively saying it’s going to do it.

For those looking to play the industry as a whole, the Global X FinTech ETF has been a popular way.

Therefore, it’s no surprise that with Apple going after the space, the ETF has tumbled.

Let’s take a look using Uniform Accounting at the quality of those companies and see if Apple is right to be going after the space, and if their valuations price in that competition or not yet. 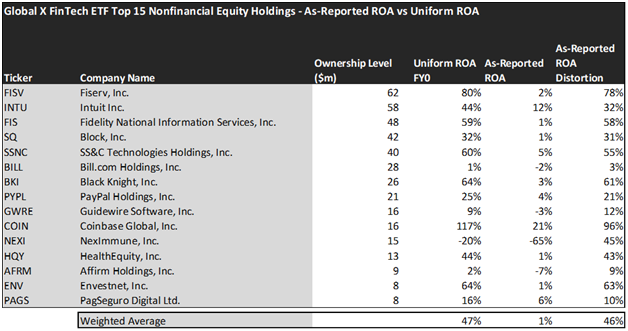 Using as-reported accounting, investors would think investing in FinTech companies would result in the portfolio achieving a very weak return on assets (ROA).

On an as-reported basis, many of these companies are poor performers that destroy value by operating with an average as-reported ROA of around 1%.

However, once we make Uniform Accounting (UAFRS) adjustments to accurately calculate earning power, we can see that the returns of the companies in the Global X FinTech ETF are much more robust.

The average company in the portfolio displays an impressive average Uniform ROA of 47%. This is significantly above corporate average returns and representative of the high growth and success that the industry has experienced.

Once the distortions from as-reported accounting are removed, we can realize that Fiserv (FISV) doesn’t have an ROA of 2%, but returns of 80%.

Similarly, Intuit’s (INTU) ROA is really 44%, not 12%. Intuit has created a strong portfolio of products that make money management and filing taxes easier and more accessible for all consumers.

Block, Inc (SQ), is another great example of as-reported metrics mis-representing the company’s profitability. With a Uniform ROA of 32%, an as-reported of 1% is wholly misleading and misses the story.

If investors were to look at the industry as powered by as-reported metrics, they would think that Apple is crazy to enter an industry with such low profitability.

Apple is thinking of investing in an industry that has a strong record of profitability, but we need to also see if they have a strong upside scenario going forward. 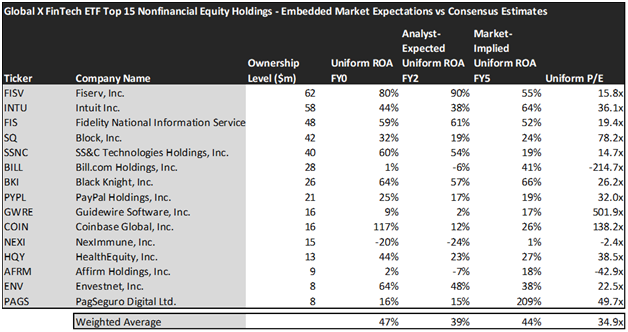 Embedded Expectations Analysis of Global X FinTech ETF paints a clear picture of the fund. While the stocks it tracks are strong performers historically, the markets are pricing them to slightly decline in profitability, while analysts are expecting a steeper decline.

While analysts forecast the fund to see Uniform ROA fall to 39% over the next two years, the market is pricing the fund to drop to just 44% levels. This may lead to downside risk as the names deteriorate faster than the market expects.

The markets are expecting Intuit’s Uniform ROA to rise to 64%. Meanwhile, analysts are projecting the company’s returns to drop to 38%.

Bill.com (BILL) may further disappoint investors as their returns are expected to only further decrease to -6% Uniform ROA, while analysts expect them to increase their returns to 41%.

In total, it looks like the risk of disruption for Apple spells the end of the glory days of independent fintech companies. Investors hoping to buy in today looking for a discount may be disappointed.

As the Uniform Accounting tearsheet for Fiserv highlights, its Uniform P/E trades at 15.8x, which is below the global corporate average of 20.6x and its historical average of 19.8x.

Low P/Es require low, and even negative, EPS growth to sustain them. In the case of Fiserv, the company has recently shown a 5% Uniform EPS growth.

We take Wall Street forecasts for GAAP earnings and convert them to Uniform earnings forecasts. When we do this, Fiserv’s Wall Street analyst-driven forecast is for EPS to grow by 26% and 7% in 2022 and 2023, respectively.

Based on the current stock market valuations, we can use earnings growth valuation metrics to back into the required growth rate to justify Fiserv’s $101 stock price. These are often referred to as market embedded expectations.

The company is currently being valued as if Uniform earnings were to shrink by 6% annually over the next three years. What Wall Street analysts expect for Fiserv’s earnings growth is above what the current stock market valuation requires through 2023.

Meanwhile, the company’s earning power is well above long-run corporate averages. Also, cash flows and cash on hand are around 2x the total obligations—including debt maturities and capex maintenance. However, intrinsic credit risk is 110bps. Together, these signal moderate operating and credit risks.

Lastly, Fiserv’s Uniform earnings growth is above peer averages, but is trading below its average peer valuations.