Sometimes, the stock market can give conflicting signals. For instance, when stock prices were bottoming out in 2008, the market’s P/E was at an all-time high.

Which is the right signal to follow? Uniform Accounting provides insight into how to go about divining market signals.

The Great Recession of 2008 was the biggest decline in corporate earnings we have ever seen in America.

Obviously it was a tough time to be in business, especially for companies like homebuilders, banks, and other industries with exposure to the housing market.

Many of these industries saw earnings fall to negative levels, but most other industries took serious haircuts too.

A big part of this was driven by executive teams taking advantage of poor economic conditions in order to take a “big bath.”

The idea of a big bath comes from the concept that in times when the economy is struggling, it’s inevitable that companies will miss on their earnings targets.

For executive teams, it doesn’t make a huge difference if the company misses earnings by a little or a lot—in either case the company underperforms.

However, once conditions begin stabilizing, it’s easier to impress stakeholders when prior results are especially weak…and when management has built reserves from prior write-downs that they can “run down” to reduce expenses.

Thus, during the Great Recession, many executive teams were actually incentivized in the long-term to make earnings look as bad as possible in the short-term.

This is the “big bath” we were talking about.

While CFOs do this all the time, an unprecedented number of companies decided to ‘reset’ their financials during 2008, leading to the biggest S&P EPS decline we have ever seen.

Based on the way as-reported financial metrics measure valuations, this led to a strange phenomenon.

Even though stock prices fell by 50+%, valuation multiples like P/E rose to historically high levels. 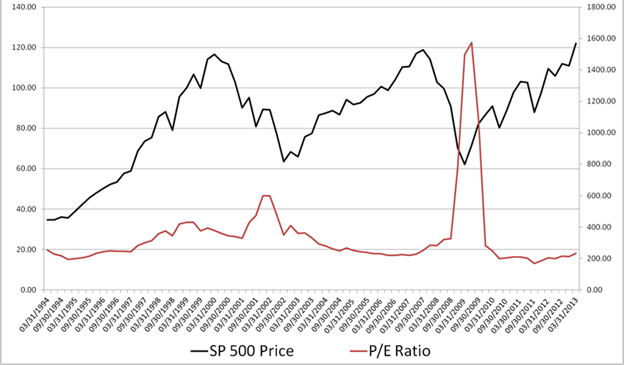 Since earnings fell dramatically further than market prices, P/E ratios skyrocketed. When the market was at its bottom in 2009, investors may have thought that the market was still expensive.

In fact, we remember a headline in the Wall Street Journal in 2009, close to the market bottom, saying just that, that there was more downside because valuations were still high.

This is yet another reason as-reported metrics tend to be unreliable. In reality, the market was clearly at its cheapest point at the end of the financial crisis. We saw the same thing happen during the dotcom bubble, too.

By applying Uniform Accounting metrics, we can get a more accurate read on market valuations. Rather than looking at a traditional P/E ratio, we look at the company’s Uniform Enterprise Value (EV’) over its Uniform Earnings, which we call V/E’.

Rather than seeing market valuations peak when the market is at its lowest point, V/E’ reveals the opposite for the last two recessions.

Valuations topped out in 2001 and 2007 before sharply declining as share prices dropped.

We can also see that valuations have been fairly stable for the last several years after peaking in 2014.

As we continue to monitor the impact of COVID-19 on the markets in the coming weeks and months, especially as companies likely take write-offs for disruptions from the virus, it will be increasingly important to monitor valuations on a Uniform basis to avoid misleading signals.