When Kevin Durant looked across the court on May 30th, 2016, it’s likely the sense of defeat truly rolled over him. He hadn’t just lost Game 7 of the Western Conference Finals to the Warriors, he was looking at a juggernaut that was set up to keep on winning. He couldn’t see a way his Thunder could beat them.

His solution? To join the Warriors the next year, creating a world eating line-up that dominated the NBA for several seasons.

Portfolio managers and analysts don’t have it as easy as Kevin Durant did. Most of them can’t just walk over to BlackRock and join the team.

And recently, trying to follow along with BlackRock by buying the stock has not been any more beneficial than fighting against them. The stock has fallen from above $500 in early 2018 to below $450 today. 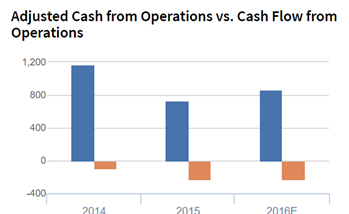 BlackRock has seen equity AUM declines. Also, as-reported ROA for BlackRock is incredibly low, at below 2%. Perhaps BlackRock is starting to lose its step. Perhaps the move back to active managers has begun?

In reality, our Uniform Accounting shows that not to be the case. While the market has beaten the company up recently for those short-term issues, at the current stock price the market misunderstands how profitable BlackRock is. And it looks like they are starting to see fundamental momentum shift in a real way that might make the market start to see the error in its ways.

I’m in Chicago this Friday

This Friday, I’m presenting at the Driehaus College of Business at DePaul in Chicago. The free event is at 9am, at the campus in the Loop

Seating is limited, so let us know if you’re interested, and we’ll be sure to save you a seat. You can reply to this email, or email Andy Aronson (andrew.aronson@valens-research.com).

Market expectations are for Uniform ROA compression, but management is confident about their alternatives franchise and bond ETFs 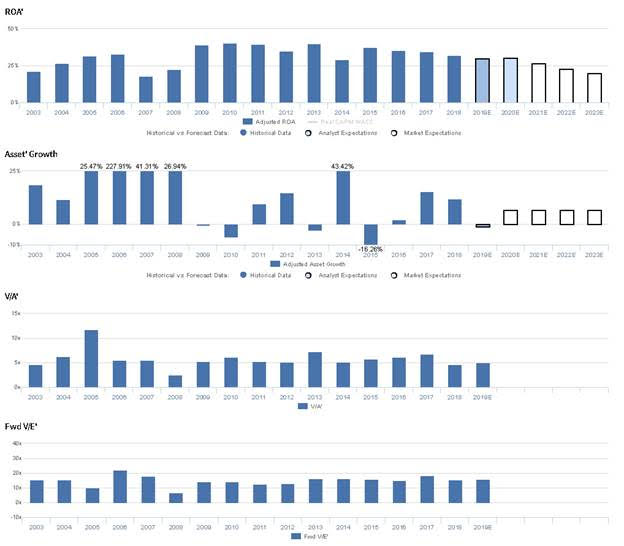 BLK currently trades near recent averages relative to UAFRS-based (Uniform) Earnings, with a 15.9x Uniform P/E. At these levels, the market is pricing in expectations for Uniform ROA to compress from 32% in 2018 to 20% by 2023, accompanied by 7% Uniform Asset growth going forward.

Meanwhile, analysts have less bearish expectations, projecting Uniform ROA to only decline to 30% in 2020, accompanied by 1% Uniform Asset shrinkage. 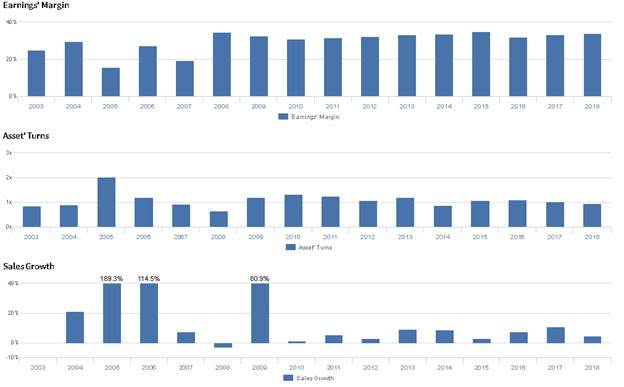 Valens’ qualitative analysis of the firm’s Q2 2019 earnings call highlights that management is confident they had a lower diluted share count in the current quarter and that they have continued momentum in their alternatives franchise. Furthermore, they are confident their minority investments are part of their capital management strategy, and they are confident about the future growth opportunities they see for their bond ETFs.

As-reported metrics significantly understate BLK’s asset efficiency, a key driver of profitability. For example, as-reported asset turnover for BLK was 0.1x in 2018, materially lower than the Uniform Turns of 0.9x, making BLK appear to be a much weaker business than real economic metrics highlight. Moreover, as-reported asset turnover has remained at 0.0x-0.1x levels since 2009, while Uniform Turns have ranged from 0.9x-1.3x in this timeframe, distorting the market’s perception of the firm’s historical asset efficiency trends.

Today’s tearsheet is for Alibaba. Alibaba trades at well above market average valuations, but even at these levels, the market is undervaluing the company’s growth opportunities. The company has grown and is forecast to continue to grow earnings significantly faster than the market is pricing in. Alibaba also has well above corporate average returns.