Is this biotech firm a negative return start-up or a mature company destroying value by attempting to grow? Uniform Accounting gives the real answer

This company demonstrates that not all biotechnology firms either become moonshots or crash-and-burn.

While as-reported ROA suggests it is a consistently unprofitable company, TRUE UAFRS-based (Uniform) analysis shows that, despite faltering returns, the company has been able to remain profitable following its successful product launches over a decade ago.

However, management appears concerned about new treatment approval and the results of drug trials. This suggests market expectations for improvement in profitability may not be justified.

Biotechnology, or biotech, is often regarded as one of the most high-risk industries to invest in.

The development of novel treatments can be a very lucrative business. So, when picked correctly, a biotechnology stock can skyrocket.

Drugs such as HUMIRA, SOVALDI, and Enbrel generate billions of dollars of revenue annually for the firms that created them. Their respective developers, Abbvie, Gilead, and Amgen, have even become household names. Moreover, their stocks have experienced meteoric rises as a result of their launches.

However, the development and launch of new treatments is long and hard.

The FDA approval process alone can take upwards of 2.5 years. It requires numerous rounds of rigorous data gathering and clinical trials to develop a strong proof-of-concept.

Many biotech firms fail to ever get to launch. One small misstep in a trial or one phase of inconclusive results can lead to the end of a company, and a stock price collapse.

Even for firms that succeed in their trials, the road may be difficult.

Drug development is costly. It can take millions of dollars of upfront investment to complete each step of the process. In addition, firms cannot sell their drugs until they are fully approved by the FDA. In other words, they have no other way to make money.

As a result, plenty of biotech firms have negative profitability. In fact, in our database of over 300 biotech companies, over 66% have negative Uniform ROAs.

To understand which companies are really winning and losing the battle to get to profitability in biotech, it is essential that you look at the right numbers. Sometimes the assumption that a biotech firm has low or negative return is incorrectly validated by as-reported metrics

There are times when an investor might think they’re analyzing a company that is still early in its lifecycle, and so needs to be dealt with like a start-up. In reality, that’s just bad as-reported accounting data; the company might actually be generating real cash flow.

That is the case with BioMarin Pharmaceutical Inc. (BMRN).

BioMarin was founded in 1997. It is a biotech firm with seven approved drugs currently in the market. It also has two more treatments in development.

As-reported metrics suggest that ROA has been negative in each year since 2011. In addition, the company appears to have only been profitable in three years, from 2008 to 2010, following the successful launch of Kuvan.

However, Uniform Accounting paints a different picture of the firm’s profitability. BioMarin has invested heavily in R&D for the development of their pipeline drugs and has compensated management with stock options.

As a result, as-reported metrics are materially understating BioMarin’s profitability.

Since the launch of Kuvan in 2008, Uniform ROA has remained positive in each year, even reaching a peak of 14% directly after the launch.

Thereafter, Uniform ROA has consistently faded to 3%-4% levels from 2015 to 2018, well below corporate averages. BioMarin is a mature profitable business, but its consistent investment in R&D has not been productive, as it focuses on orphan drugs, with limited addressable markets.

That is a very different type of company to analyze. That’s a mature company that is trying to grow that might need to turn off growth. It’s not a start-up where investors should be understanding where the company is turning the corner.

At its current stock price, the market expects a reversal of recent trends, with Uniform ROA projected to expand from current 3%-4% troughs to 7% by 2023, accompanied by robust 18% Uniform Asset growth going forward.

In addition, the company trades at a lofty 41.3x Uniform P/E, and in order to justify these valuations, the firm’s pipeline would have to produce big winners.

With high expectations, it may be hard for the firm to justify lofty valuations going forward, especially given management’s concerns.

BioMarin Pharmaceutical Inc. Embedded Expectations Analysis – Market expectations are for Uniform ROA to rebound slightly, but management may be concerned about FDA approval and revenue 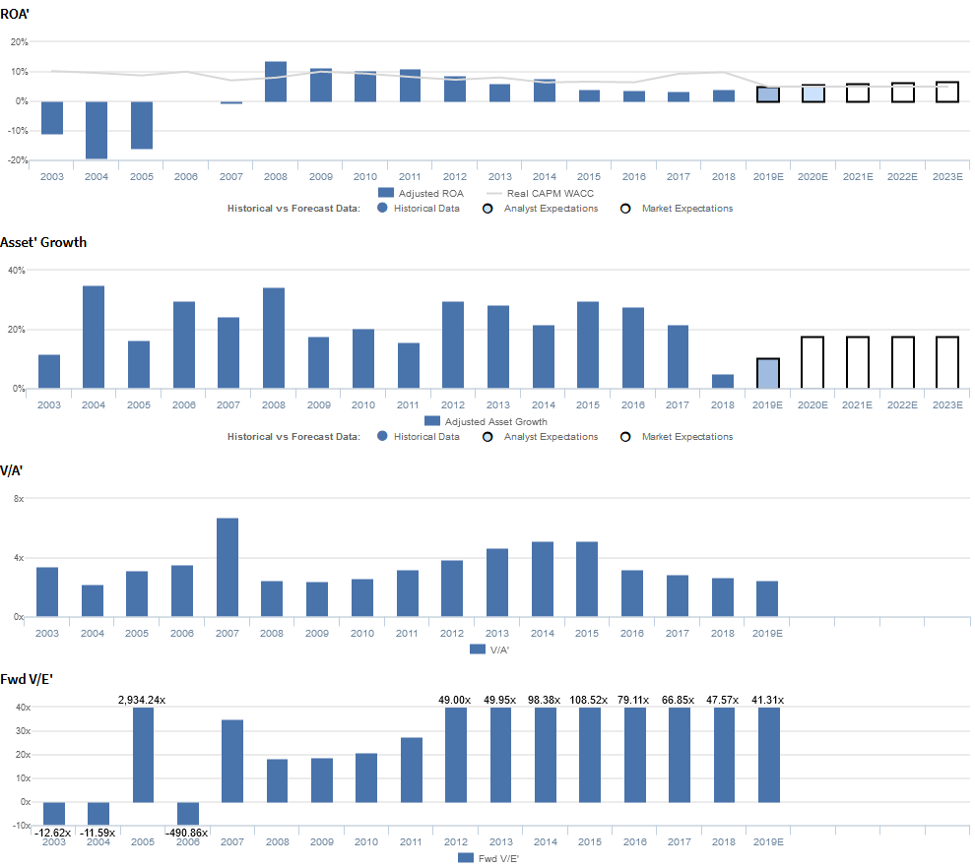 At these levels, the market is pricing in expectations for Uniform ROA to improve from 4% in 2018 to 7% by 2023, accompanied by 18% Uniform Asset growth.

BMRN has seen positive profitability since the approval of Kuvan by the FDA in late 2007.

Meanwhile, the firm has been growing its Uniform Asset base aggressively, with growth ranging from 5% to 35% over the past 16 years. 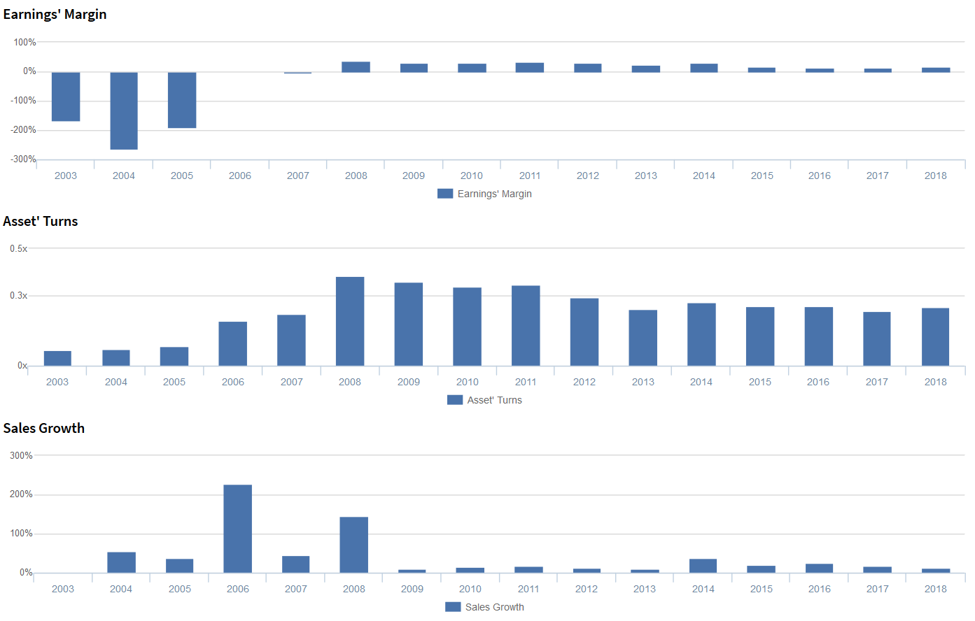 Trends in Uniform ROA have been driven by volatility in Uniform Earnings Margin and diminishing Uniform Asset Turns.

At current valuations, the market is pricing in expectations for improvement in Uniform Margins coupled with stability in Uniform Asset Turns.

Valens’ qualitative analysis of the firm’s Q3 2019 earnings call highlights that management is confident in the speed of their Palynziq launch in Europe.

For example, as-reported ROA for BMRN was -2% in 2018, materially lower than a Uniform ROA of 4%, making BMRN appear to be a much weaker business than real economic metrics highlight..

Moreover, Uniform ROA has been positive since 2008, while as-reported ROA has been consistently negative since 2011, significantly distorting the market’s perception of the firm’s profitability.

High P/Es require high EPS growth to sustain them, and BioMarin Pharmaceutical requires robust 24% EPS growth to justify current valuations. That said, the company has grown Uniform EPS by 45% over the past year, which is significantly higher than required.

We take Wall Street forecasts for GAAP earnings and use them as the starting point for our Uniform earnings forecasts. When we do this, Wall Street analysts forecast BioMarin Pharmaceutical’s Uniform EPS to grow by 36% in 2019, followed by 33% growth in 2020.

Wall Street analyst expectations for BioMarin Pharmaceutical’s earnings growth are consistent and currently above what is required by the market.

With its high valuations, BioMarin Pharmaceutical’s Uniform P/E is above peer group medians, while its Uniform EPS growth falls below peer averages.

Meanwhile, the company’s earning power is well below corporate averages, but as a result of its strong cash flows and sizable cash buffer, credit risk remains low.

To conclude, BioMarin Pharmaceutical is a company with weak earning power but lofty expectations, and in order to justify current valuations, it must achieve the strong earnings growth forecasted by analysts.