With Cathie Wood’s stock picks losing steam, let’s see if she can get her golden touch back

Cathie Wood made a name for herself in the past couple of years as the market surged to new highs, and many of her previously vilified names skyrocketed even higher than the market to previously unimaginable levels.

However, as markets have cooled down in recent months, so has the performance of her ETF, down more than 55% this year. Shockingly, demand for her funds has not yet cooled though, with her ETF continuing to see inflows.

With her previously golden bets finally under fire, now is a good time to take a look at the ARK ETF to see if her high-profile growth names are poised for the dramatic upside Wood seems convinced of.

Cathie Wood has been known for her proclivity for defying what traditional investors consider sound investing.

Rather, she has been known for making bold bets, with pronouncements that often sharply contrast with typical sentiments at the time.

As the entire market went berserk and ratcheted up in 2020 and 2021, her stock picks seemed like magic out of a genie’s lamp.

The narrative changes as investors take a step back and look at the big picture, even if it’s challenging to do so when caught up in the thrill of surging equity values.

Even with a stellar run for two years, her ETF has underperformed its benchmark by 900 basis points on an annualized basis.

While most investors would pare their losses, Wood instead has come out and proclaimed her picks are in “deep value” territory. Much to the chagrin of much of the investing community, the ARK ETF has somehow had inflows this year despite posting huge losses.

With consistent underperformance in its history, this may come as a shock. However, a deeper look highlights why she remains so bullish.

She recently paid a hefty sum to buy out a partner from her funds when her AUM was nearly at all-time highs, and as a result, she has no option but to maintain perpetual rosiness about her holdings.

With the market sliding in recent weeks, now is a good time to take a look at the performance, growth, and valuations of Cathie Wood’s holdings in the ARK ETF. That way, we can get a sense of what Wall Street and the markets are pricing into the future of U.S. growth equities that she has invested in, and see if her holdings warrant her aggression.

Contrary to what one might expect with the collapse of many of Wood’s holdings in recent months, many of the holdings in the ETF remain in a better position than you would expect. 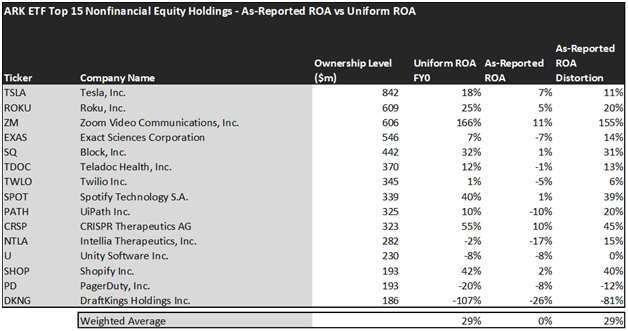 The average as-reported ROA among the ARK ETF top 15 names is immaterial. In other words, these companies appear to be destroying value by operating. In reality, though, these companies are much more profitable, with a 29% Uniform ROA.

One of the fund’s largest holding Roku (ROKU) for example, doesn’t return measly below cost of capital returns of 5%. It actually provides drastically stronger returns, at a 25% Uniform ROA. This takes into account the strong pivot to digital subscriptions the streaming industry has seen.

Some of its other investments are also much stronger than they appear. For example, Zoom Communications (ZM) does not have 11% returns. Rather, it has a 166% Uniform ROA as the face of the virtual workplace.

Furthermore, Spotify Technology (SPOT) doesn’t have a barely profitable return of 1%. Rather, it has immensely strong returns of 40%, which is representative of its place as the leader in music and podcast streaming. 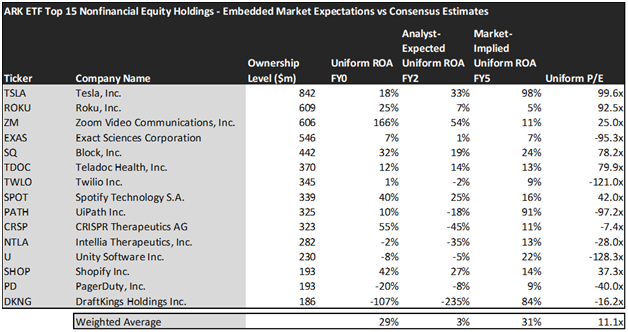 Embedded Expectations Analysis of the ARK ETF paints a clear picture of the fund. The stocks it tracks are projected by analysts to drop and become below average return holdings. However, the market is pricing these companies to continue being highly profitable companies.

In other words, Cathie Wood may be left out in the cold when the market realizes how expensive these names are. Unlike analysts that are expecting average ROA to drop to 3%, the market is pricing these companies to see economic profitability grow to 31%.

Similarly, DraftKings (DKNG) should also continue its current trajectory. While the market is projecting them to become a wildly profitable company with an 84% Uniform ROA, analysts expect them to continue their descent to a -235% Uniform ROA company.

While the market is preaching that this is just a great time to “buy the dip”, a look at the true financials shows that many of these high growth names aren’t as sure a bet as Cathie Wood is making them out to be.

This just goes to show the importance of valuation in the investing process to understand the underlying story. Finding a company with strong growth is only half of the process. The other, just as important part, is attaching reasonable valuations to the companies and understanding which have upside which have not been fully priced into their current prices.

Read on to see a detailed tearsheet of the largest holding in the ARK ETF.

As the Uniform Accounting tearsheet for Tesla highlights, its Uniform P/E trades at 99.6x, which is above the global corporate average of 24.0x, but below its historical average of 101.8x.

High P/Es require high EPS growth to sustain them. In the case of Tesla, the company has recently shown a Uniform EPS growth of 1,421%.

We take Wall Street forecasts for GAAP earnings and convert them to Uniform earnings forecasts. When we do this, Tesla’s Wall Street analyst-driven forecast is a 90% and 30% EPS growth in 2022 and 2023, respectively.

Based on the current stock market valuations, we can use earnings growth valuation metrics to back into the required growth rate to justify Tesla’s $770 stock price. These are often referred to as market embedded expectations.

The company is currently being valued as if Uniform earnings were to grow by 59% annually over the next three years. What Wall Street analysts expect for Tesla’s earnings growth is above what the current stock market valuation requires in 2022, but below that requirement in 2023.

Lastly, Tesla’s Uniform earnings growth is above its peer averages, and the company is also trading above its average peer valuations.