Contrary to distorted as-reported metrics, this company thrives off the spending habits of high-income earners looking for a bargain

This discount store operator has a unique business model and an incredibly loyal following among its customers.

As-reported metrics would have you believe this company’s discount strategy has left it with returns only slightly above cost-of-capital, but true UAFRS (Uniform) based analysis shows the firm’s real profitability.

It is often said many wealthy people get to where they are by being thrifty. Millionaires often look for deals and do not spend money where it is not necessary.

Warren Buffet is the perfect example of this. He still lives in the house he bought in 1958 for $31,500, despite being one of the richest men of the modern age.

Steve Jobs was famous for being incredibly frugal as well. He was known to live in houses with no furniture and balk at spending too much money at the grocery store.

The world’s former richest man Carlos Slim still lives in the same house he bought over 40 years ago. Slim is also known to drive old cars, and skip the typical luxurious lifestyle of private jets and yachts.

Our Director of Research Rob Spivey has a story from a ski trip with hedge fund colleagues that confirms the pattern. One of the hedge fund managers hosting the event spent a great deal of time not talking about any wealth, but about talking about how much he’d saved supplying the trip with all of the Costco (COST) products he had around his house. He loved to mention how cost effective it was and the money he saved.

Costco has gained a cult-like following for its warehouse atmosphere and massive bulk purchases. Costco sells everything from groceries to engagement rings.

It has become the destination store to go to for virtually every aspect of shoppers’ lives. Costco has even removed all aisle signs to encourage shoppers to wander around more. This drives higher sales, as people purchase unexpected items.

Costco has done an incredible job of appealing to above-average earners looking for cheaper products. The average Costco member had a family income of $93,000, well above the national average.

More than 98 million people worldwide pay an annual membership fee just to get inside Costco. Additionally, less than 10% a year decide not to renew. This is an incredibly sticky customer base.

At first glance, it looks like these high earners are doing such a great job saving money, that Costco’s returns are being capped.

Looking at as-reported metrics, it would appear Costco’s returns have seen almost no meaningful growth during the last decade.

Its as-reported return on assets (ROA) has settled between 6%-7% over the last 10 years. Those looking at as-reported numbers see Costco only as a low-return business, unable to capitalize on their massive and sticky customer base.

However, this picture of Costco’s performance is inaccurate, pulled down by distortions in as-reported accounting.

While it looks like the shoppers are the ones getting a bargain, Costco is clearly profiting with expanding returns.

Costco excels at driving customer loyalty, and creates recurring revenue through memberships. Customers are willing to not only pay for the store items, but also for an annual membership just to walk through the door.

Just because Costco is a strong business, it does not necessarily mean the stock is a good buy though. We can use the Embedded Expectations Framework to easily understand market valuations and the buying potential.

As you can see, the market expects returns to grow well beyond current levels. This is despite the massive economic uncertainty and record unemployment numbers caused by the current pandemic.

Costco has demonstrated incredible resilience. However, investors appear to have excessive expectations even for this impressive business.

For Costco to justify the current stock price, it would need to almost double its current returns within five years. While Costco has proven its profitability, this seems like a tall ask.

Without Uniform Accounting, investors would misunderstand a high-return company with an incredibly sticky customer base and recurring revenue for one with stagnant profitability. However, they also would have no way to approach understanding why investors are so excited about this company, even if they may be too excited.

Costco Wholesale Corporation Embedded Expectations Analysis – Market expectations are for material Uniform ROA expansion, but management may be concerned about sales, margins, and their food courts 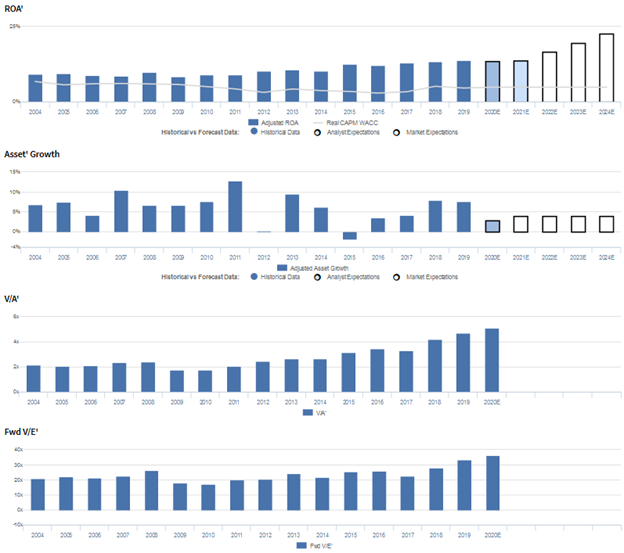 COST currently trades at historical highs relative to Uniform earnings, with a 36.1x Uniform P/E (Fwd V/E’). At these levels, the market is pricing in expectations for Uniform ROA to expand from 14% in 2019 to a high of 23% in 2024, accompanied by 4% Uniform asset growth going forward.

Historically, COST has seen gradually improving profitability, with Uniform ROA remaining at 8%-11% levels from 2004 through 2014, before expanding to 14% in 2019. Meanwhile, the firm has seen consistent Uniform asset growth, positive in fifteen of the past sixteen years, while ranging from -2% to 13%. 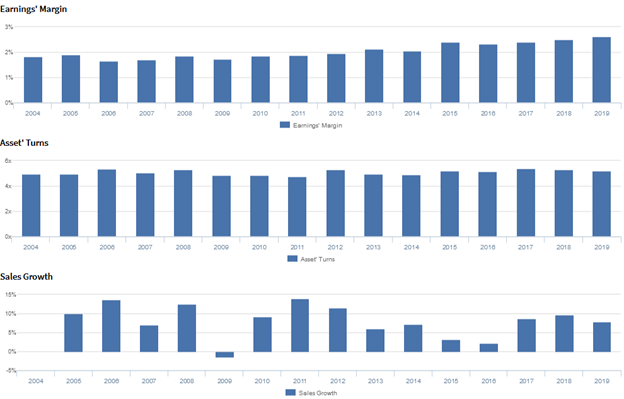 At current levels, the market is pricing in expectations for further expansion in Uniform margins and for Uniform turns to reach new peaks.

In addition, they may lack confidence in their ability to maintain their comparable store sales growth, renewal rate improvements, and gasoline gross margin strength.

Furthermore, they may be concerned about FX headwinds, core merchandise category margin declines, and costs attributed to coronavirus.

Meanwhile, they may lack confidence in their ability to sustain hand sanitizer, office item, seafood, and produce performance.

Additionally, they may have concerns about their core operations SG&A expenses, interest and principal payments from their outstanding debt, and their same-day grocery program.

Moreover, management may lack confidence in their ability to market both online and physical shopping and assist small food service-related businesses, and they may be concerned about reducing the selection of Christmas merchandise.

Finally, they may be overstating their Innovel acquisition’s ability to boost higher ticket, big and bulky items sales, the effectiveness of their online inventory management, and the popularity of roadshows and their executive membership options.

For example, as-reported asset turnover for COST was 3.4x in 2019, materially lower than Uniform turns of 5.2x, making COST appear to be a less efficient business than real economic metrics highlight.

Moreover, as-reported asset turnover has been well below Uniform turns in each year since 2004, significantly distorting the market’s perception of the firm’s asset efficiency trends for almost two decades.

As the Uniform Accounting tearsheet for Costco Wholesale Corporation (COST:USA) highlights, the Uniform P/E trades at 36.1x, which is above corporate average valuation levels and historical averages.

High P/Es require high EPS growth to sustain them. In the case of Costco, the company has recently shown a 15% Uniform EPS growth.

We take Wall Street forecasts for GAAP earnings and convert them to Uniform earnings forecasts. When we do this, Costco’s Wall Street analyst-driven forecast an EPS growth of 3% and 7% in 2020 and 2021, respectively.

Based on the current stock market valuations, we can use earnings growth valuation metrics to back into the required growth rate to justify Costco’s $336 stock price. These are often referred to as market embedded expectations.

The company needs to have Uniform earnings grow by 14% each year over the next three years to justify current prices. What Wall Street analysts expect for Costco’s earnings growth is below what the current stock market valuation requires.

To conclude, Costco’s Uniform earnings growth is above peer averages. Therefore, as is warranted, the company is also trading above average peer valuations.