While every fund is struggling, this one is preparing for record returns

It has been a tough year for many funds. S&P 500 Index is down around 17% year-to-date and uncertainties all around the world have been going on throughout the year.

However, there’s one fund that did not rely on any excuses and is on its way to recording its most profitable year.

BlueCrest Capital Management, led by Micheal Platt, is continuing to deliver exceptional returns to its investors. Let’s have a look at the fund and evaluate it from the Uniform Accounting perspective.

Most of the hedge funds are recording big losses for this year as they have been investing in companies that were hit by rising rates, supply chain problems, and the Ukraine-Russia war.

Some of them are performing worse than the market, even though they are hedged as the names suggest.

But there are a few that did not hide behind excuses and did not disappoint their investors.

One of these names is BlueCrest Capital Management, founded by Michael Platt and William Reeves in 2000.

The fund allocates its assets between systematic strategies that are based on pattern-spotting computer algorithms and discretionary trades which are made by human-driven decisions.

Micheal Platt believes that aggressive stop-losses are significantly important while managing trades and gives a huge deal to hedging positions.

In his first live interview, he mentioned three things he will not touch which are exposure to banks, peripheral debt risk, and illiquid investments.

His perspective on risk management allowed him to record significant returns while everyone else is panicking.

It seems that this strict approach to trading and his vision for the fund works well for both himself and his investors.

This year the fund has recorded a staggering return of 114% so far, benefitting from trading bonds and commodities amid soaring inflation and rising interest rates.

If the fund can maintain this profitability, 2022 will be its record year.

In this context, let’s see the top holdings of BlueCrest and evaluate their performance using Uniform Accounting. 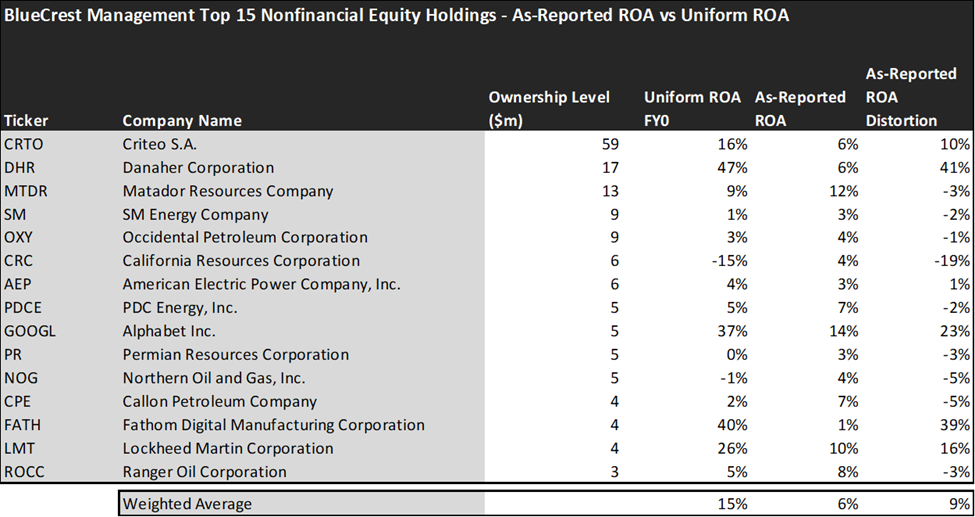 Looking at as-reported accounting numbers, investors would think that BlueCrest Capital Management is even worse than the corporate average profitability and that their returns are not really rewarding.

On an as-reported basis, many of the companies in the fund are bad performers. The average as-reported ROA for the top 15 holdings of the fund is 6%, which is half of the U.S. corporate average of 12%.

However, once we make Uniform Accounting adjustments to accurately calculate earning power, we can see that the average return in BlueCrest’s top 15 holdings is actually 15%.

As the distortions from as-reported accounting are removed, we can see that Fathom Digital Manufacturing Corporation (FATH) isn’t a 1% return business. Its Uniform ROA is 40%.

Meanwhile, Danaher Corporation (DHR) looks like a 6% return business. This huge $200 billion company provides a diverse set of products and services worldwide, and it actually powers a 47% Uniform ROA. 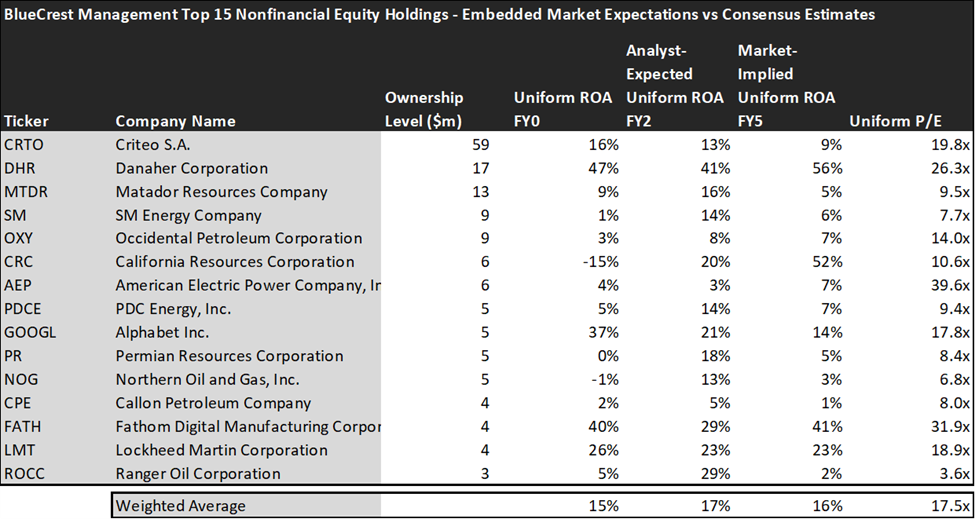 Embedded Expectations Analysis of BlueCrest paints a clear picture. Over the next few years, Wall Street analysts expect the companies in the fund to stay flat in profitability and the market’s expectations are in line with the analysts.

Analysts forecast the portfolio holdings on average to see Uniform ROA remain around 17% over the next two years. At current valuations, the market agrees with the analysts by expecting a 16% Uniform ROA for the companies in BlueCrest’s portfolio.

For instance, the famous aerospace and defense company Lockheed Martin Corporation (LMT) returned 26% this year. Analysts think its returns will slightly decline to 23%. And at an 18.9x Uniform P/E, the market agrees with analysts’ expectations and is pricing Uniform ROA to be around 23%.

Overall, BlueCrest Capital Management has high-quality names that are overlooked because of the distortions from as-reported metrics. However, the market is already pricing in the expected profitability levels from the companies in BlueCrest’s portfolio, which may lead to some downside risk. That is why it’s highly important for investors to analyze the current valuations and market expectations before any investment decision.

Read on to see a detailed tearsheet of one of BlueCrest Capital Management’s largest holdings.

As the Uniform Accounting tearsheet for Criteo S.A. highlights, its Uniform P/E trades at 19.8x, which is around the global corporate average of 18.4x, and above its historical average of 17.7x.

Low P/Es require low EPS growth to sustain them. That said, in the case of Criteo S.A., the company has recently shown 185% Uniform EPS growth.

We take Wall Street forecasts for GAAP earnings and convert them to Uniform earnings forecasts. When we do this, Criteo S.A.’s Wall Street analyst-driven forecast is for EPS to shrink by 70% in 2022 and grow by 108% in 2023.

Furthermore, the company’s return on assets was 16% in 2021, which is 3x the long-run corporate averages. Also, cash flows and cash on hand consistently exceed its total obligations—including debt maturities and CAPEX maintenance. Moreover, its intrinsic credit risk is 360bps above the risk-free rate. Together, these signal moderate operating risks and moderate credit risks.