Did a hedge fund great play in the World Series?

In October, we looked at one of the greatest hedge fund managers of all time who took the grandfather of value investing’s teachings, and expanded them while generating impressive returns.

He is a rare success story of someone who said how they were going to beat the market before they did it, and then went out and produced world beating returns for over 30 years.

Below is the story we told about him in October, including an updated portfolio analysis for his fund, based on his fund’s latest 13-F. 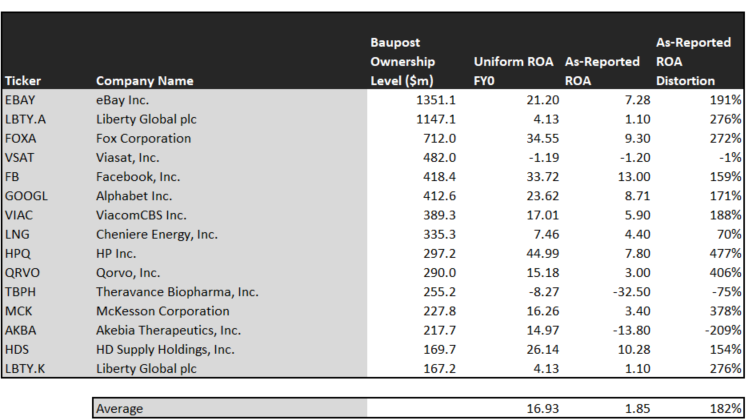 On an as-reported basis, many of these companies are poor performers with returns below 5%, and the average as-reported return on assets (ROA) is right at 2%.

In reality, the average company in the portfolio displays an impressive average Uniform ROA at 17%—that’s above corporate average returns currently. These are the kind of companies that likely have strong economic moats offering real fundamental visibility for Klarman and Baupost to understand the companies’ margin of safety.

Once the distortions from as-reported accounting are removed, we can realize that Facebook (FB) doesn’t have a 13% ROA, it is actually at 35%. Facebook is a cash generating machine that has earned its massive valuation.

Akebia’s ROA isn’t negative 14%, it is actually positive at 15%. Baupost appears to understand that market expectations for the company, thinking it’s a negative return business, are completely incorrect.

The list goes on from there, for names ranging from eBay (EBAY) and Liberty Global (LBTY.A), to Fox Corporation (FOXA), HP (HPQ), and McKesson (MCK).

If Baupost were focused on as-reported metrics, it would never pick most of these companies because they do not look like companies that would provide the fund with the margin of safety it desires in its investments. 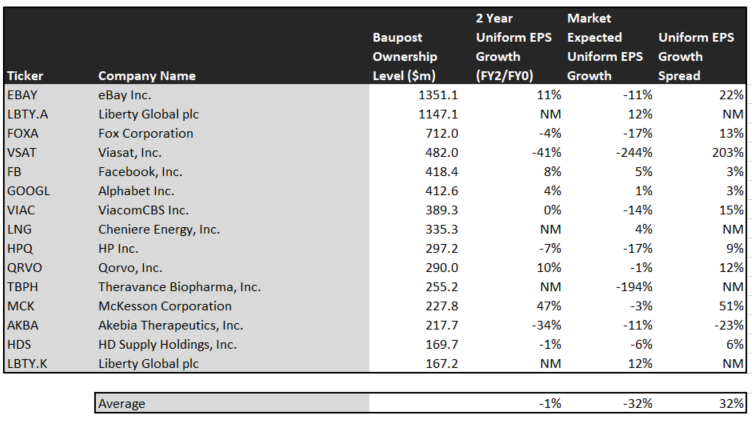 But while the companies in the portfolio aren’t forecast to grow significantly in the middle of the pandemic, Baupost gets a margin of safety on its investments by identifying companies where the market is even more pessimistic for growth than what the companies are forecast to generate.

One example of a company in the Baupost portfolio that has growth potential that the market is mispricing is eBay (EBAY), Baupost’s largest holding. eBay’s Wall Street analyst forecasts have 11% Uniform earnings growth built in, but the market is pricing the company to have earnings shrink by 11% each year for the next two years.

Another company with similar dislocations is McKesson (MCK). The market is expectating 3% decline in earnings. However, the company is actually forecast for Uniform EPS to grow by 47% a year.

Yet another is the fund’s largest holding, Fox Corporation (FOXA), is priced for 17% decline in Uniform earnings, when the company is forecast to only see earnings decline by 4% a year.

That being said, there are a few companies we’d recommend Baupost look at again before holding. Either the rest of the market has not caught up with what Baupost is seeing for the company, or Klarman has misjudged these companies’ growth.

Akebia (AKBA) is forecast to see Uniform earnings shrink by 34% a year going forward. However, the market is pricing the company for only 11% annual earnings shrinkage.

But most of Baupost’s holdings clearly look like companies with the margin of safety that Klarman would be focused on. It wouldn’t be clear under GAAP, but unsurprisingly Uniform Accounting sees the same signals that Baupost appears to.

As our Uniform Accounting tearsheet for Liberty Global plc (LBTY.A) highlights, Liberty Global trades at a Uniform P/E of 14.9x, below corporate average valuation levels and its own recent history.

Low P/Es require low EPS growth to sustain them. In the case of Liberty Global, the company recently had a 104% Uniform EPS growth.

As such, we use Wall Street GAAP earnings estimates as a starting point for our Uniform Earnings forecasts. When we do this, we can see that Liberty Global is forecast to see Uniform EPS shrinkage of 153% in 2020 followed by 9% growth in 2021.

Based on current stock market valuations, we can back into the required earnings growth rate that would justify $22 per share. These are often referred to as market embedded expectations.

In order to meet the current market valuation levels of Liberty Global, the company would have to grow Uniform EPS by 12% each year over the next three years.

What Wall Street analysts expect for Liberty Global’s earnings growth is far below what the current stock market valuation requires.

The company’s earning power, based on its Uniform return on assets calculation, is below corporate average returns. However, with cash flows and cash on hand consistently exceeding debt obligations, Liberty Global has low credit and dividend risk.

To conclude, Liberty Global’s Uniform earnings growth and valuation are both trading below peer averages.