Did A Hedge Fund Legend Play In The 1932 World Series?

As he takes strike one, the Cubs bench players are jeering at him, and the Wrigleyville faithful are screaming any insult they can think of.

Ruth doesn’t tune them out, instead he steps one foot out of the batter’s box and points the head of his bat to the deepest part of center field. He steps back into the box.

Ruth steps out again. And he does again uses his bat again to point to the Exact. Same. Place. He’s calling his shot!

He steps back in to the batter’s box… and Charlie Root throws a curveball that never makes it to the catcher’s mitt.

The Yankees went on to win the game 7-5, and to win the series also. And baseball fans have loved telling that story every day since.

That story has such staying power because of the improbability of it. It’s easy for a pitcher, to say after a no-hitter, that he felt like something special was going to happen as he warmed up that afternoon. It’s easy to look back and call David Ortiz one of the most clutch players of all time after he helped the Red Sox win 3 world series. But to be able to call your shot, not just that you were going to get a hit, but that you were going to hit a home run, over right center field, is near impossible.

Which is why it’s so impressive that sixty years later, Seth Klarman did the exact same thing. And its why he’s a legend in his field, almost to the scale Babe Ruth is in baseball.

Seth Klarman didn’t play in the World Series for the Yankees or hit a home run in Wrigley. He’s actually a minority owner of the Red Sox, so the idea of him playing for the Yankees is rather ironic.

But Seth Klarman has been a wildly successful investor. His fund Baupost has produced 20% returns a year since 1983. He’s outperformed the market by almost 4x since he started the strategy.

In the book, Klarman laid out his value investing philosophy and how he would pick stocks. He laid out his exact strategy that would eventually lead to Baupost’s phenomenal performance. He called his shot, and then he delivered 4x the market’s performance.

Klarman and Baupost are still picking stocks today, and is doing an amazing job.

Klarman has regularly railed against the issues with as-reported accounting metrics. He has mocked investors who use metrics like EBIT and EBITDA to value companies, because of how distorted they are.

Because of Baupost’s strong research, their analysis unsurprisingly lines up with Valens Uniform Accounting. To show what we mean, we’ve done a high level portfolio audit of Baupost’s current portfolio, based on their most recent 13-F. This is a very light version of the custom portfolio audit we do for our institutional clients when we analyze their portfolios for torpedos and companies they may want to “lean in” on. 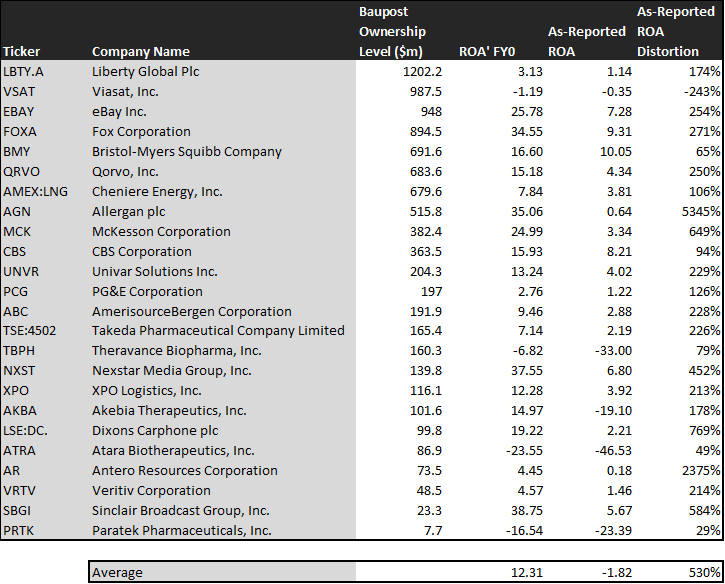 Using as-reported accounting, investors would be scratching their heads at the companies that Baupost is buying. The average company in their portfolio has a negative return on assets (ROA). On an as-reported basis, it is losing money. If we look at the median, the median company in their portfolio only is producing a miserly 2.5% ROA. That’s well below cost-of-capital levels, according to any model.

But once we make Uniform Accounting (UAFRS) adjustments, we realize that the returns of the companies in Klarman’s portfolio are much more robust. Once the distortions from as-reported accounting are removed, we realize that Allergan (AGN) doesn’t have a 0.6% ROA, its actually at 35%. For some companies, as-reported metrics are even directionally wrong. Akebia Therapeutics (AKBA) doesn’t have a -19% ROA, like as-reported metrics show, they have a 15% UAFRS ROA. Sinclair Broadcast Group’s (SBGI) ROA is really 39%, not 6%. 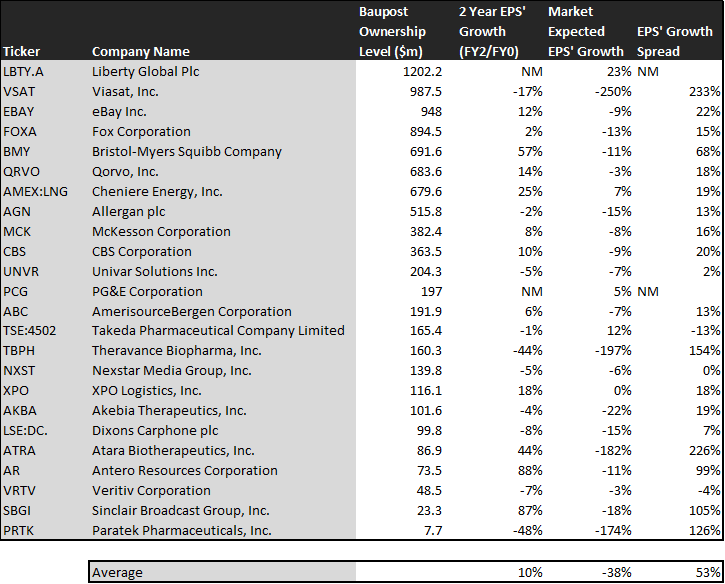 For context, the average US listed company (above $1 billion market cap) has an EPS growth spread of 5%. For the average company, the market is undervaluing their earnings growth by 5%, which is basically fairly valued. For most companies, the market gets it right, and correctly prices the company’s potential.

Baupost is even finding megacap names with significant mispricings. Bristol-Myers Squibb (BMY) is priced for earnings to decline by 11% a year the next 2 years. It’s actually forecast to grow 57%.

There are some names that we’d recommend Baupost review in their portfolio if we were meeting with their PMs. Two that jump out are Takeda (TSE:4502) and Nexstar (NXST). For Takeda, the market is pricing in 12% annual earnings growth right now, but the company is actually forecast for Uniform Accounting EPS to shrink by 1% a year the next two years. For Nexstar, the market appears to be getting the company right. The company is forecast to see Uniform Accounting earnings shrink by 5% a year going forward, and the market is pricing it for 6% a year declines.

But for the most part, Baupost gets it right. And they get it right because they’re not trusting the as-reported accounting statements, and they’re following the maxims that Klarman wrote long before he became as successful as he is today.

Today’s tearsheet is for Home Depot. Home Depot trades at a slight premium to the market. However, at current valuations, the market expectations for Uniform EPS growth are significantly less than growth was last year, and roughly in line with forecasts for the next 2 years. The company’s forecast earnings growth lags peers, but the company has robust profitability and no risk to its dividend yield.