Does Ray Dalio still have what it takes to keep Bridgewater in the #1 spot?

No matter how successful they have been recently, there will always be some people that’ll be remembered as legends of the investment industry. With such a success story of founding the world’s largest hedge fund from a two-bedroom apartment in New York, Ray Dalio deserves to be considered a legend.

If there would be a hall of fame in the investment world, Ray Dalio will surely be among the most distinguished inclusion. That is why today we are going to analyze Bridgewater using Uniform Accounting, to see how the fund has been holding up.

Founded in 1975, Bridgewater has been an active player in the global markets for almost a half-century.

With his charm and success, Ray Dalio has managed to grow the fund that started in his apartment to the largest in the world by assets under management.

The fund has always been named among the best hedge funds around the world. Over that long period of investment history, Bridgewater managed to successfully go through many crises and market crashes.

He was able to turn a profit during the 1987 stock market crash, handled the dot-com crisis brilliantly, and forecasted the global financial crisis in 2007.

As a man that got over lots of crises and market crashes, Ray Dalio shared his recent insights on the market and the economy.

He thinks any rally in the market is a sign of naive and inconsistent thinking about how the economic machine works, as the Fed is going to slow the economy.

Throughout 2021, Bridgewater lagged behind the market before recording a stellar December and ending the year in line with benchmarks. Meanwhile, 2022 is where Bridgewater has really started to accelerate.

Even while the market has been down almost 20% through the first half of the year, Bridgewater is currently up a whopping 32%.

Let’s examine if his portfolio is positioned smartly for the market environment he’s done a great job of predicting so far. 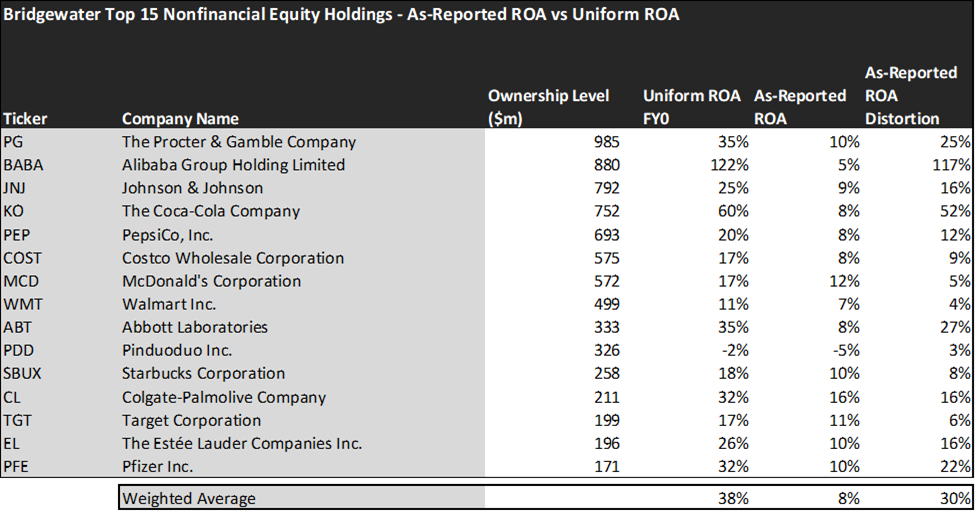 Using as-reported accounting, investors would think investing in the world’s largest hedge fund is not that profitable.

On an as-reported basis, many of these companies are poor performers in terms of profitability and operating with an average as-reported ROA of just 8% which equates to below corporate averages in the United States.

However, once we make Uniform Accounting (UAFRS) adjustments to accurately calculate earning power, we can see that the returns of the companies in Bridgewater are much more robust.

The average company in the portfolio displays an impressive average Uniform ROA of 38%, which is almost four times the corporate average returns.

Once the distortions from as-reported accounting are removed, we can realize that The Coca-Cola Company (KO) doesn’t have a ROA of 8%, but returns of 60%.

Similarly, Abbott Laboratories’ (ABT) ROA is actually 35%, not 8%. Abbott Laboratories is a highly successful company that engages in the discovery, development, manufacture, and sale of a broad and diversified line of health care products.

Alibaba Group (BABA) is another great example of as-reported metrics mis-representing the company’s profitability. With a Uniform ROA of 122%, an as-reported ROA of 5% is wholly misleading and misses the story.

If investors were to look at the fund as powered by as-reported metrics, they would think that Ray Dalio is not a great fund manager as it seems.

When distortions from as-reported metrics are removed, investors can see that Bridgewater is actually doing a great job and they are highly successful. However, investors shouldn’t jump into the fund without considering the upside potential of such an investment. 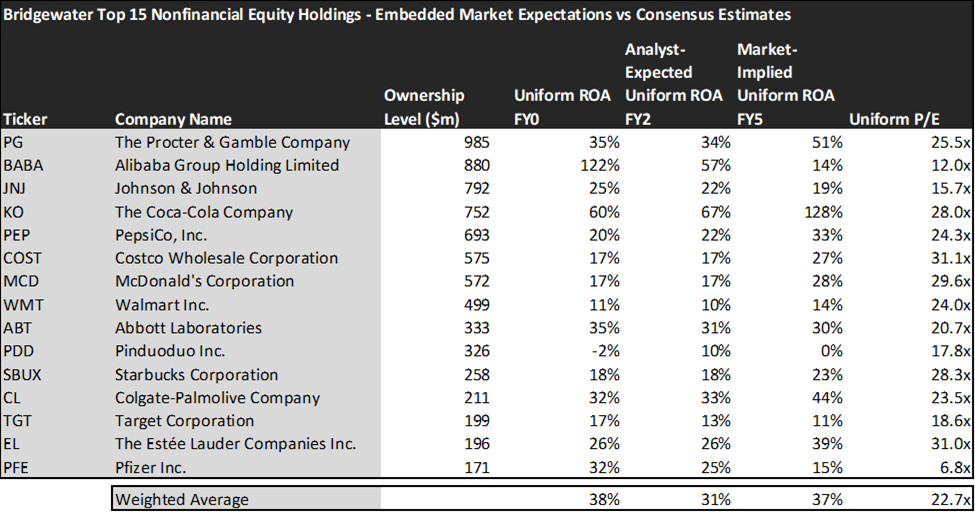 Embedded Expectations Analysis of Bridgewater paints a clear picture of the fund. As the stocks it tracks are strong performers historically, the markets are pricing to remain in line with current returns, while analysts see returns dip.

While analysts forecast the fund to see Uniform ROA decline to 31% over the next two years, the market is pricing the fund to see returns decrease to 37%. This means the stocks have downside risk.

The markets are expecting McDonald’s (MCD) Uniform ROA to rise to 28%. Meanwhile, analysts are projecting the company’s returns to remain flat at 17%. This could lead to a potential retraction in equity valuations.

Procter & Gamble (PG) may further disappoint investors as their returns are expected to slightly decrease to 34% Uniform ROA, while the market expects them to increase their returns to 51%.

To sum up, the portfolio is composed of historically strong performers and names that can deliver high profitability as is expected from a legend such as Ray Dalio. However, the market is most likely already pricing in Dalio’s portfolio correctly, leading to a flat performance after such a strong run.

Read on to see a detailed tearsheet of Bridgwater’s largest holdings.

As the Uniform Accounting tearsheet for P&G highlights, its Uniform P/E trades at 25.5x, which is above the global corporate average of 19.7x, but around its historical average of 25.2x.

High P/Es require high EPS growth to sustain them. In the case of P&G, the company has recently shown 10% Uniform EPS growth.

We take Wall Street forecasts for GAAP earnings and convert them to Uniform earnings forecasts. When we do this, P&G’s Wall Street analyst-driven forecast is for EPS to grow by 1% in 2022 and by 4% in 2023.

Based on the current stock market valuations, we can use earnings growth valuation metrics to back into the required growth rate to justify P&G’s $142 stock price. These are often referred to as market embedded expectations.

The company is currently being valued as if Uniform earnings were to grow by 4% annually over the next three years. What Wall Street analysts expect for P&G’s earnings growth is below what the current stock market valuation requires in 2022, but matches it in 2023.

Meanwhile, the company’s earning power is 6x the long-run corporate averages. Also, cash flows and cash on hand are greater than the total obligations—including debt maturities and capex maintenance. In addition, intrinsic credit risk is 50bps. All in all, these signal low dividend and credit risks.

Lastly, P&G’s Uniform earnings growth is in line with peer averages, and is trading in line with its average peer valuations.