As-reported metrics don’t reflect how successful this company has been in getting back in the game, next is seeing if the company can keep delivering

After first struggling to adapt to changing consumer needs, this firm has been able to recover to historically strong profitability levels by embracing new platforms.

While as-reported ROA looks fairly average for the name, TRUE UAFRS-based (Uniform) analysis shows that, as a result of its ability to embrace recent trends, this company has been able to rebound and produce robust profitability.

However, management appears concerned about user engagement across its online sports franchises, their ability to sustain net booking improvement, and their competitive moat. This suggests market expectations for continued, robust profitability may be too optimistic.

For generations of gamers, dating back to 1993, these words have been a staple of sports video games. Although recently retired, these words stood as the introduction to some of the most popular gaming franchises, from Madden to FIFA to NHL and more.

They have also been a staple of Electronic Arts Inc. (EA), one of the world’s largest video game developers. And EA Sports has been one the firm’s most prominent segments since its launch.

It helped lead EA to broad success for much of the ‘90s and 2000’s. The firm was able to update and re-release its strong franchises annually. Gamers, who did not want to fall behind on the most recent update, would quickly snatch-up the newest version.

However, by the late 2000’s, EA’s strategy was no longer working.

A lack of new blockbuster titles, franchise fatigue, and operational inefficiencies from its newly adopted “city-state” model led to a host of issues for the firm.

To add, the video game market was changing, and EA was falling behind. The market had shifted from people buying games to game reselling. It was also beginning to transition towards online content consumption and subscription models.

These trends, coupled with the recession, led to a collapse in EA’s profitability. EA’s Uniform ROA fell from 20%+ levels prior to 2005 to negative levels in 2010, before recovering to modest 4%-6% levels through 2014.

It seemed like Electronic Arts and its sports gaming empire had finally crumbled.

However, following a reorganization and consolidation of its segments, EA has recovered strongly. The company has been able to embrace new gaming trends.

It has invested heavily into online and multiplayer platforms for its main franchises. It has started offering free-to-play console and mobile games, and has been able to induce an emphasis on in-game transactions.

It has even started to pursue competitive gaming, such as e-sports, in order to capitalize on social media trends and a rise of streaming platforms.

These downloadable content and subscription offerings, as well as exclusive licensing arrangements with powerful brands, such as Star Wars, have led to a recovery in profitability.

EA has been able to transform from a struggling business to one with strong and consistent 20% Uniform ROA returns in recent years.

However, as-reported metrics fail to capture the extent of the firm’s profitability recovery.

Following the firm’s resurgence in 2015, as-reported ROA has ranged at 7%-11% levels through 2019, dropping to the low end of the range recently. Investors wouldn’t be faulted for looking at these numbers and thinking that the strategy is again getting played out, and profitability is again rolling over.

But as highlighted above, Uniform Accounting paints a different picture of the firm’s profitability, with Uniform ROA ranging between 12% and 21%, nearly double as-reported metrics each year.

At its current stock price its clear the market recognizes as-reported metrics are wrong. The market expects EA’s robust Uniform ROA of 19% to remain steady through 2024, accompanied by 4% Uniform Asset growth going forward.

In order to sustain these profitability levels, the firm will need to continue to evolve with changing video game market dynamics. The video game development market is highly competitive, and EA has already shown how badly a firm can struggle in this space when it fails to adapt.

While the company has executed well thus far, given management negative sentiment, the firm may struggle to find another catalyst to continue its recent strength.

Specifically, management appears concerned about user engagement across its online sports franchises, their ability to sustain net booking improvement, and their competitive moat. These concerns involve some of the things that have actually propelled EA to sustain strong profitability recently.

With its high expectations and management’s concerns about key areas, it may be hard for the firm to justify its current valuations going forward.

Electronic Arts Inc. Embedded Expectations Analysis – Market expectations are for Uniform ROA to remain robust, but management may be concerned about user engagement, net bookings, and their competitive moat 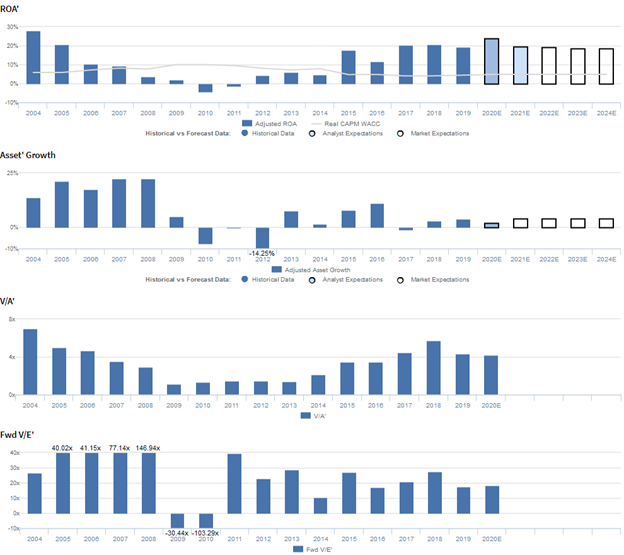 Even at these levels, the market is pricing in expectations for Uniform ROA to remain at 19% levels through 2024, accompanied by 4% Uniform Asset growth going forward.

Meanwhile, Uniform Asset growth has been similarly volatile, positive in 12 of the past 16 years, while ranging from -14% to 22%. 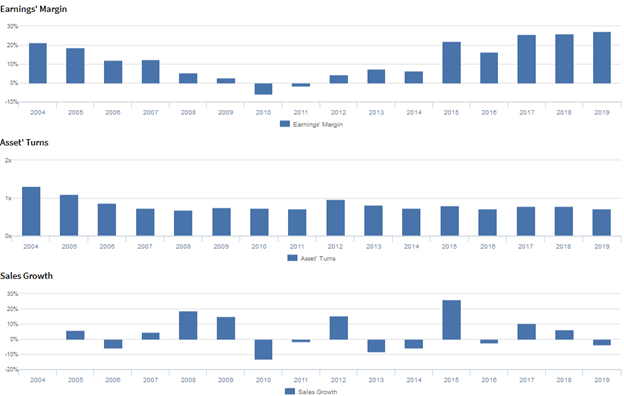 Volatility in Uniform ROA has been driven primarily by trends in Uniform Earnings Margin, and to a lesser extent, Uniform Asset Turns.

At current valuations, markets are pricing in expectations for Uniform Margins to compress slightly, coupled with stability in Uniform Turns.

Valens’ qualitative analysis of the firm’s Q2 2020 earnings call highlights that management is confident they are working to expand social interaction and competition features, and they are confident their new FIFA content will bring new fans into the game.

Furthermore, they are confident the digital sales model flattens their sales curve.

However, management may be exaggerating user engagement with their FIFA 20 global series, and they may be concerned about the future of their NBA live series. `

Furthermore, they may lack confidence in their ability to launch an NCAA sports game and expand on their Battlefield V product.

In addition, they may lack confidence in their ability to sustain recent net bookings improvement, and they may be exaggerating the competitive moat of their talent pool.

Finally, they may lack confidence in their ability to sustain FIFA and Madden growth and create an e-sports league for Apex Legends.

For example, as-reported ROA for EA was 7% in 2019, substantially lower than Uniform ROA of 19%, making EA appear to be a much weaker business than real economic metrics highlight.

Additionally, since 2015, as-reported ROA has not exceeded 11%, while Uniform ROA has not been less than 12%, distorting the market’s perception of EA’s recent profitability ceiling.

As the Uniform Accounting tearsheet for Electronic Arts Inc. (EA) highlights, EA trades at a 19.5x Uniform P/E, which is below corporate average valuation levels, but near its own recent history.

Corporate average P/Es require moderate EPS growth to sustain them. However, for Electronic Arts, the company has recently shown a Uniform EPS growth of only 3%.

We take Wall Street forecasts for GAAP earnings and convert them to Uniform earnings forecasts. When we do this, Electronic Arts’ Wall Street analyst-driven forecast is for 36% Uniform EPS growth in 2020, followed by 13% Uniform EPS shrinkage in 2021.

Based on current stock market valuations, we can back into the required earnings growth rate that would justify $108 per share. These are often referred to as market embedded expectations. In order to meet current market valuation levels, Electronic Arts would have to have Uniform earnings grow by just 2% in each year over the next three years.

Meanwhile, the company’s earnings power is 3x corporate averages, and their robust cash flows and cash on hand signal that there is very low risk to the company’s operations and credit profile.

To conclude, Electronic Arts is a company with modest earnings growth and near corporate average valuations, but with low required earnings growth, embedded expectations are not unreasonable for the firm.