Get Big or Die Trying

The local news business has been steadily under pressure for the past 5+ years, and really for some time before that. Data from MoffettNathanson shows that pay TV subscribers are shrinking.

Viewership for local broadcasts in particular are far more popular for retirees than millennials. The younger generation get much of their news online, and unplugging from the cable box is a trend that is only going to accelerate.

There’s a reason there has been a wave of consolidation for content providers themselves, and television networks, over the past several years. As overall “eyeballs” watching shrink, it means stations and companies without a broad base to draw from are likely to struggle.

For broadcasting companies in particular, scale is powerful in several ways. Scale inside a market is powerful, because it lets the company combine stations and reduce costs. Many of the larger broadcast station companies who have multiple stations in the same market will have them share the same studios, and even the same news, to significantly reduce costs versus having two standalone stations. Retransmission fees don’t decline, but the cost to produce news does.

Also, some of the larger broadcast station companies lower cost by having some segments produced centrally. Sinclair has been one of the companies to have done this.

One of the companies that have had the most success in consolidating and scaling their business to defend it is Tegna (TGNA).

Tegna was created after Gannett spun off their newspaper assets in 2015. Before and after the spin-off, the company had been steadily acquiring TV assets. With the company’s Nexstar/Tribune station acquisitions the company is now the largest Big 4 affiliate in the top 25 markets in the US, and has 62 stations in total.

They’ve used their scale to reduce costs and improve efficiencies in the business. They’ve also been tactical in their growth, focusing on areas where they anticipate secular growth in political spending that boosts their profitability every 2 years.

Their successful focus on using their scale to help facilitate their strategy had led adjusted ROA to expand from 6% in 2013 to 24% in 2018. This has been a very successful strategy.

The market doesn’t believe this can continue. The market believes that the risks around reduced viewership and lower advertising revenue and therefore lower retransmission fees means returns are going to crater, and Tegna is being priced for that to happen.

However, management is showing confidence about their strategies to sustain their returns through cost cutting strategies, and the potential for their M&A strategies to help give them scale to sustain revenue strength. Considering low market expectations and the company’s strong fundamentals, the market may have Tegna wrong.

Markets are pricing in expectations for Uniform ROA to fall, but management is confident about their M&A strategy and costs 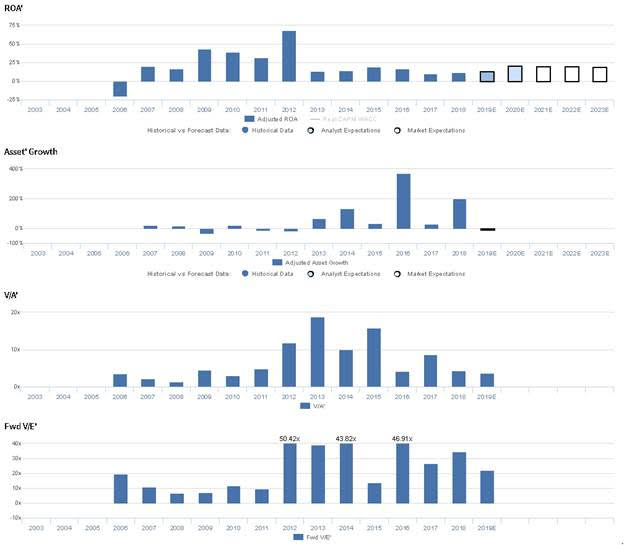 TGNA currently trades below corporate averages relative to UAFRS-based (Uniform) Earnings, with a 12.0x Uniform P/E. At these valuations, the market is pricing in expectations for Uniform ROA to fall from 24% in 2018 to 14% by 2023, accompanied by immaterial Uniform Asset growth going forward.

However, analysts have bullish expectations, projecting Uniform ROA to improve to 25% by 2020, accompanied by 1% Uniform Asset shrinkage. 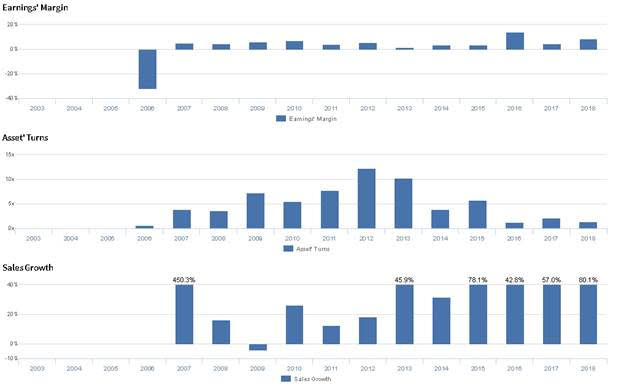 Valens’ qualitative analysis of the firm’s Q2 2019 earnings call highlights that management is confident their M&A strategy will continue to position the firm for success and that their dispatch acquisition gives them TV coverage to two thirds of all Ohio homes. Furthermore, they are confident their acquired stations help reduce their cost base, and they are confident in their ability to continue their M&A program.

Uniform Accounting metrics also highlight a significantly different fundamental picture for TGNA than as-reported metrics reflect. As-reported metrics can lead investors to view a company to be dramatically stronger or weaker than real operating fundamentals highlight. Understanding where these distortions occur can help explain why market expectations for the company may be divergent.

As-reported metrics significantly understate TGNA’s ROA. For example, as-reported ROA for TGNA was 9% in 2018, substantially lower than Uniform ROA of 24%, making TGNA appear to be a much weaker business than real economic metrics highlight. Moreover, as-reported ROA has been substantially lower than Uniform ROA in each year since 2003, misleading investors to believe that TGNA has a much lower ROA floor than is accurate.

Today’s tearsheet is for LVMH. LVMH trades at a premium to market valuations. At current valuations, the market is pricing in Uniform EPS to grow steadily; however, the company is actually forecast to have EPS grow significantly more the next two years, and they’ve grown more robustly previously. The company’s earnings growth is at the high end of peers, while the company is trading at average valuations relative to peers. The company has robust profitability and no risk to their dividend.