Gold is one of the most popular forms of investment, without really being an “investment” at all

Along with stocks, bonds, and cash, gold is one of the most popular asset classes for individual investors.

Especially during times of economic uncertainty, you’ll hear a lot of investors advocating for buying gold, citing its strong performance when other asset classes are struggling.

The truth is, however, gold isn’t the investment people think it is… and your money may be better served elsewhere.

The current coronavirus pandemic has people reconsidering where they should be spending their money.

A lot of families are stocking up on guns, water, and toilet paper in preparation for a potential doomsday scenario. Even for the less catastrophic thinkers out there, people have been buying more shelf-stable food and cleaning supplies to limit their time outside.

On top of that, the Fed and the other central banks have been flooding the market with cash to guarantee there are no liquidity issues in the system. With so much cash in the economy, there’s concerns that if the economy picked back up, inflation would become rampant. The value of fiat currency would drop.

In the investment world, a lot of money has been flowing out of equities and into cash or alternative asset classes like gold.

This isn’t the first time we’ve seen gold perform well during uncertain times—it tends to be a pretty strong performer when the economy isn’t working as it should.

Most notably, gold surged in demand in the 1980s when inflation was running rampant and traditional stock market returns were fairly muted.

Since the beginning of 2020, we’ve seen a surge in gold prices to their highest levels since 2013. 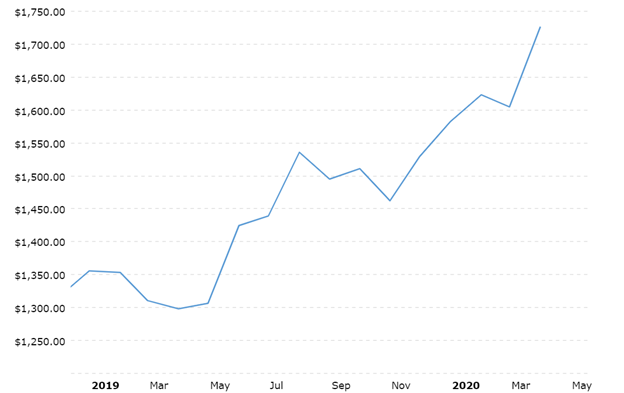 It’s common advice to buy gold during a market panic—it might be because of its historical connection to the dollar or because of its perceived value as a precious metal.

However, whether or not those points are true, at the end of the day, gold is nothing more than a metal rock.

That’s not to say that it can’t be a decent store of value in short-term scenarios. But the point is, it’s neither a true investment nor a true bet against the economy.

If you really think the economy is in trouble, you should be buying guns, water, and toilet paper.

Our point in saying gold isn’t a true investment is that, over time, it acts like a store of value.

A great thought experiment to explain this starts with you buying a large gold nugget and a share in PepsiCo (PEP) in 1980.

Over the last 40 years, Pepsi’s stock performance has been good, but not great. It’s returned about 10,000%, which is between 20% and 25% annually. There are many stocks that have returned more in less time, but that’s not the only thing Pepsi has done over the last 40 years.

Pepsi has also grown its business. By buying Pepsi stock, you’re buying an active, growing company. Since 1980, Pepsi has successfully grown more than 20 one-billion dollar business lines, all of which either spun-off or are still owned by Pepsi.

What you bought in 1980 also includes its Frito-Lay snack business, Taco Bell, Pizza Hut, KFC, and more. That one share of PepsiCo has transformed, grown, and created real value.

That gold nugget you purchased in 1980… is still a gold nugget. It hasn’t grown, it hasn’t generated any cash flows, and it certainly hasn’t developed any new business lines.

It’s a somewhat silly way to visualize the difference between a real investment and a store of value, but it’s important to keep that in mind.

While there are short periods—days, months, maybe even a year or two—where gold outperforms stocks, it doesn’t even come close in the long-run. 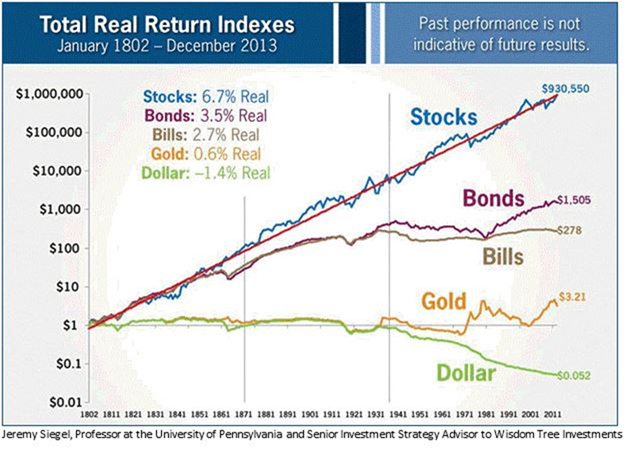 Essentially, over the last 200 years, gold stored its value. That’s inherently what it’s designed to do. Even with the recent panic in the markets, we’d assert that it’s a better time than any to be buying into the market, not to hedge against it.