This Company Is a Prime Example of Incentives Dictating Behavior

Part of her mandate when she joined was to rationalize Google’s moonshot initiatives. Her compensation was focused on keeping Google growing, but maintaining profitability.

These were and are initiatives Google invests in across various fields, attempting to invent another world-beating product, similar to their core legacy search advertising business. Google had consistently grown their asset by 20%+ a year over the prior 10 years through these investments.

For Google to sustain its growth, it was vital they continue to invest in innovation. But the problem was, those growth investments had led Uniform ROA for Google to drop from 96% in 2003 to 30% in 2014. Google was plowing money into lower return businesses.

The market could see the trend, and assumed this trend would continue. Google was priced for Uniform ROA to continue to drop going forward.

While the market was expecting returns to decline, her focus, thanks to her compensation alignment, helped change the company’s culture.

In 2018 and into the first half of 2019, the stock paused its ascent. The reason was because cost pressures were starting to emerge again. With regulatory pressure leading to more needed investment, margins came under pressure. This led to returns declining, and the market started to be spooked that Porat’s magic was running out.

But in the Q3 2019 earnings calls, management started to show more confidence about their outlook for the business, including cash flow trends, and their ability to drive growth and innovate. With the market expecting returns to continue to roll over, as they did from 2017-2018, if the company can sustain growth and maintain cash flow profitability, then there could be more upside for Google going forward.

Market expectations are for Uniform ROA to continue declining, but management is confident about their products, revenue growth, and cash flow 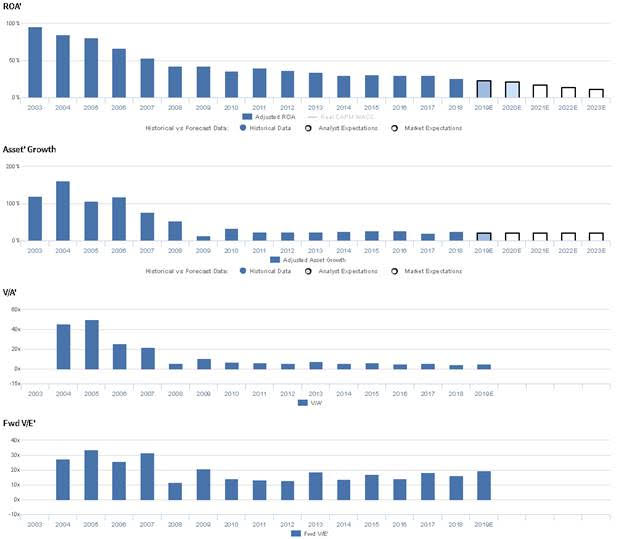 GOOGL currently trades near corporate averages relative to UAFRS-based (Uniform) Earnings, with a 19.5x Uniform P/E. At these levels, the market is pricing in expectations for Uniform ROA to fade from 26% in 2018 to a historical low of 11% by 2023, accompanied by 22% Uniform Asset growth going forward.

However, analysts have less bearish expectations, projecting Uniform ROA to only decline slightly to 21% by 2020, accompanied by 22% Uniform Asset growth.

GOOGL had seen fairly steady declines in Uniform ROA over the last 15 years, as the firm has aggressively invested to grow their business and cash flow streams. In its early stages (prior to 2006), the firm generated Uniform ROA north of 96%, but after growing its Uniform Asset base by 50%+ each year through 2008, they saw returns diminish, with Uniform ROA falling to 36% in 2010. Since then, although the firm has slowed Uniform Asset growth, it continues to grow in excess of 20% each year.

Even with the company’s continued investment in growth, since 2014, Uniform ROA stabilized around 30% levels before falling to 26% in 2018. This has been driven by a renewed focus in profitability investment, as the current CFO, Ruth Porat, has sought to enable the company to grow. 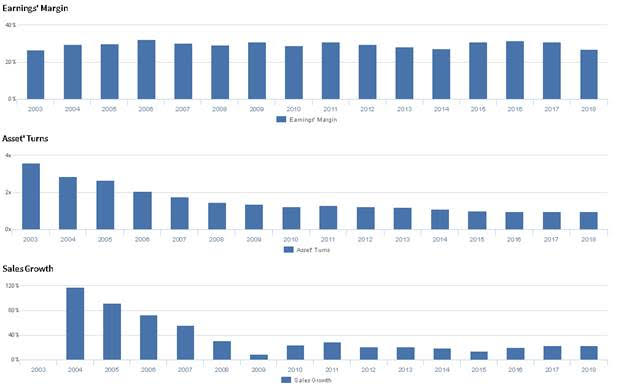 Declines in Uniform ROA have been driven by fading Uniform Asset Turns, while Uniform Earnings Margin has remained largely stable. While Uniform Margins have been mostly consistent, they rose from 27% in 2003 to 32% in 2006, and ranged from 27%-31% through 2018. Meanwhile, Uniform Turns have fallen significantly as the firm has invested in its asset base, from 3.6x in 2003 to just 1.0x in 2018. At current valuations, markets appear to be pricing in expectations for continued slight Uniform Turns compression along with a downturn in Uniform Margins.

Uniform Accounting metrics also highlight a significantly different fundamental picture for GOOGL than as-reported metrics reflect. As-reported metrics can lead investors to view a company to be dramatically stronger or weaker than real operating fundamentals highlight. Understanding where these distortions occur can help explain why market expectations for the company may be divergent.

As-reported metrics significantly understate GOOGL’s profitability. For example, as-reported ROA for GOOGL was 9% in 2018, well below Uniform ROA of 26%, making GOOGL appear to be a much weaker business than real economic metrics highlight. Moreover, since inception, as-reported ROA has been less than half of Uniform ROA, distorting the market’s perception of the firm’s historical profitability.

Today’s tearsheet is for PayPal Holdings. PayPal trades above market average valuations. The company has recently had 26% Uniform EPS growth. EPS growth is forecast to remain strong, at 15% in 2019, and 10% in 2020. At current valuations, the market is pricing the company to see earnings grow by 21% a year going forward

The company’s earnings growth is forecast to be above peers in 2019, but company is also trading above peer average valuations. The company has robust returns, and no cash flow risk.