Here’s what George Santayana and Sir Templeton would agree about

George Santayana, the famous Spanish philosopher said “Those who cannot remember the past are condemned to repeat it.” While this applies well to politics and history, it also is important to remember in finance.

One of our favorite quotes is Sir John Templeton’s “The four most dangerous words in investing are ‘this time it’s different.’” Both of these men would tell investors to know what happened in the market’s past to understand the future.

Today, we are going over an old history lesson to solve an often asked question about investing terminology.

Many retail investors think about investing as buying or selling stocks. However, these aren’t the terms Wall Street uses when talking about stock transactions.

Instead, investors going “long” on a stock means they are buying a share in the company and hoping it will go up in the long term.

Meanwhile, an investor “shorting” a stock is preemptively selling the stock, and now owes the stock to someone else. They hope it will go down later so they can buy it back for a better value.

But where exactly did these expressions come from, and why do we still use them today?

To solve this riddle, we need to turn the clocks back all the way to the Late Stone Age.

As Homo Sapiens were first developing the tools needed to build the foundations of civilizations, anthropologists and historians can see how cooperation and relationship building took on a new role in primitive societies.

Specifically, we have relics from this period showing us how early humans thought about their world in a new way.

One of these tools is the key to our story: the tally stick. 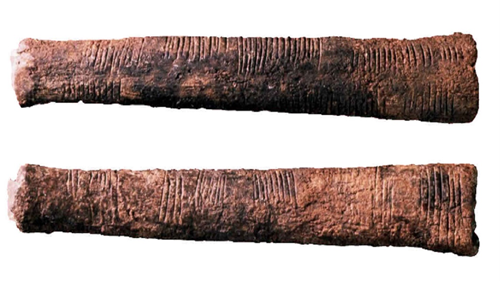 While it’s impossible to know for sure, experts believe these early relics were used to track the phases of the moon or important rituals.

These early tally sticks continued to evolve in complexity. During the time of the Persian Empire, tally sticks were used to convey messages and track food or other important administrative resources.

In the Mediaeval period, the tally sticks further evolved into the split tally sticks, where one tally stick was divided in half. This allowed two different parties to have the same set of information.

By splitting a stick down the middle, each half would only match up perfectly with the other part of the original stick.

This meant these split tally sticks served as the very first receipts. If one participant promised to pay the other with five cows, it was impossible to forge the transaction to change the number of cows after the fact.

This meant the split tally was adopted in early legal disputes thanks to the ability to protect against fraud.

The picture below shows a medieval split tally stick used for transactions. 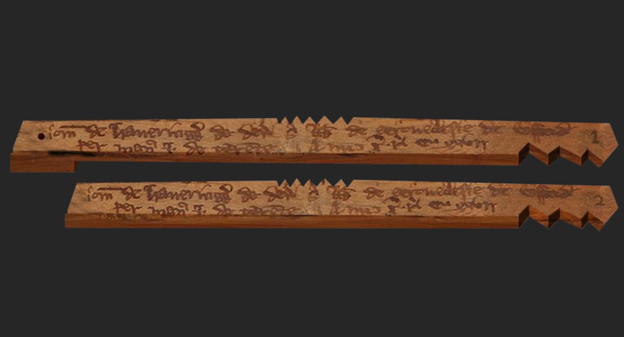 This became a widely accepted convention as split tally sticks were adopted until buyers would just say they are “long” and the person who owed the item would say they are “short.”

This is why investors in shares of a company are “long stock” today.

Many investors today may be wondering why Wall Street uses lingo which seems so far divorced from the mechanisms of trading.

However, these turns of phrases can usually be traced through history, and knowing their origin can help investors understand how markets have evolved.