This professor is the Indiana Jones of finance, and Uniform Accounting shows how his fund is the holy grail of investment strategies

Much like Indiana Jones, this hedge fund titan has spent his fair share of time in the classroom, but what has really made him famous is his success in applying his knowledge in the field.

Thanks to his team’s research, at the forefront of quantitative investing, his fund has had the strongest sustained returns of any investment great in the recent past.

While his process doesn’t focus on accounting but rather pattern recognition, UAFRS-based financial metrics show how he has found the proverbial alpha-focused holy grail of investment strategies, and his process is identifying stocks with very attractive upside signals.

In Raiders of the Lost Ark, Indiana Jones is teaching an Archaeology 101 class before Marcus Brody comes to him to send him on his quest to find the Ark of the Covenant.

His students hung on to his every word, not just because they wanted to excel in the class, but they wanted him to grade their exams. They even tried to break down his door to get him to do that after the lecture was over.

While they viewed Indy as a teacher—and a hard one to pin down at that—little did they know where Indy had been before, or where he’d go after.

They didn’t know that Indiana Jones had been an adventure-driven archaeologist for years, from his youth when he found the Cross of Coronado, to having recently survived a temple run at the Temple of the Chachapoyan Warriors.

They also didn’t know where Indy would be heading when he snuck out the window of his office, off to find the Ark. In a future adventure during World War II, he would successfully discover and identify the Holy Grail in a race against time against the Nazis.

In much the same way, one wonders if the students at Jim Simons’ class at Stony Brook University in Long Island knew who they were studying under.

After Simons graduated MIT and Berkeley with a PhD in mathematics, he contributed to develop a great deal of research on manifolds and characteristic classification work. These are complex areas of geometric studies.

This work lent itself to cryptography, and so his work caught the attention of the National Security Agency (NSA). They wanted Simons to work as a code breaker, which he did, for the NSA and Institute for Defense Analyses (IDA) until 1968, when he joined Stony Brook’s faculty, eventually becoming the chairman of the math department.

But it is what Simons did after he left his students at Stony Brook full time that is impressive.

Much like Indiana Jones, Simons set off to find the holy grail…and found it.

Simons found the holy grail of investing, an investment strategy that could generate returns so massive that even after steep fees, it would trounce the market and rarely have negative returns.

Simons founded Renaissance Technologies, one of the most respected quantitative hedge funds in the world, in 1978. It was originally called Monemetrics, before it changed its name in 1982.

It has produced an annualized 66% gross return since 1988, and a 39% net annualized return even after the funds significant fees. Over the 12 years from 1993 to 2005, the fund only posted 3 down quarters.

It is arguably the most impressive track record in the entire investing industry.

The first was a deep focus on pattern recognition analysis, similar to the type of work his thesis was on, and that he worked on in the realm of cryptography.

The second principle was to stay as far away from MBAs and those with a Wall Street background. Instead, Renaissance is sometimes stated as having one of the best math and physics departments of any institution, academic or corporate, in the world.

Simon’s view is that the groupthink across Wall Street on how the market should work, the relationships assets should have, and the type of education and information that is useful are part of the reason the market is sometimes as inefficient as it is.

Instead, bringing knowledge from its physics and math PhDs, Renaissance has been analyzing correlations and relationships between markets, corporate fundamentals, and various datasets for decades. Renaissance was working with petabyte-sized databases long before big data was a term used in business and in investing.

Even as other quantitative investors have attempted to catch up to Renaissance, the company’s strategies and research continues to unlock significant value.

Much like Bridgewater, that we wrote about in January, Renaissance’s focus is not having analysts actively picking stocks. The firm’s quantitative strategies identify stocks and other assets to buy and sell operating off the company’s research.

But even without active stock pickers, looking at the stocks Renaissance’s process identifies to generate alpha is instructive.

It is an interesting exercise to see if Uniform Accounting lines up with the quantitative strategies Renaissance is using.

We’ve conducted a portfolio audit of Renaissance’s top holdings, based on their most recent 13-F.

Unsurprisingly, for the most part, Renaissance’s analytics appear to be steering the portfolio to companies that Uniform Accounting metrics highlight are much higher quality, and have higher potential, than the market and as-reported metrics imply.

Because Uniform Accounting metrics do a better job of identifying real corporate performance than as-reported distorted metrics do, UAFRS is more likely to identify candidates to generate alpha.

Even though Renaissance is coming at identifying those companies from a very different direction, their process is unsurprisingly identifying the same signals UAFRS does. 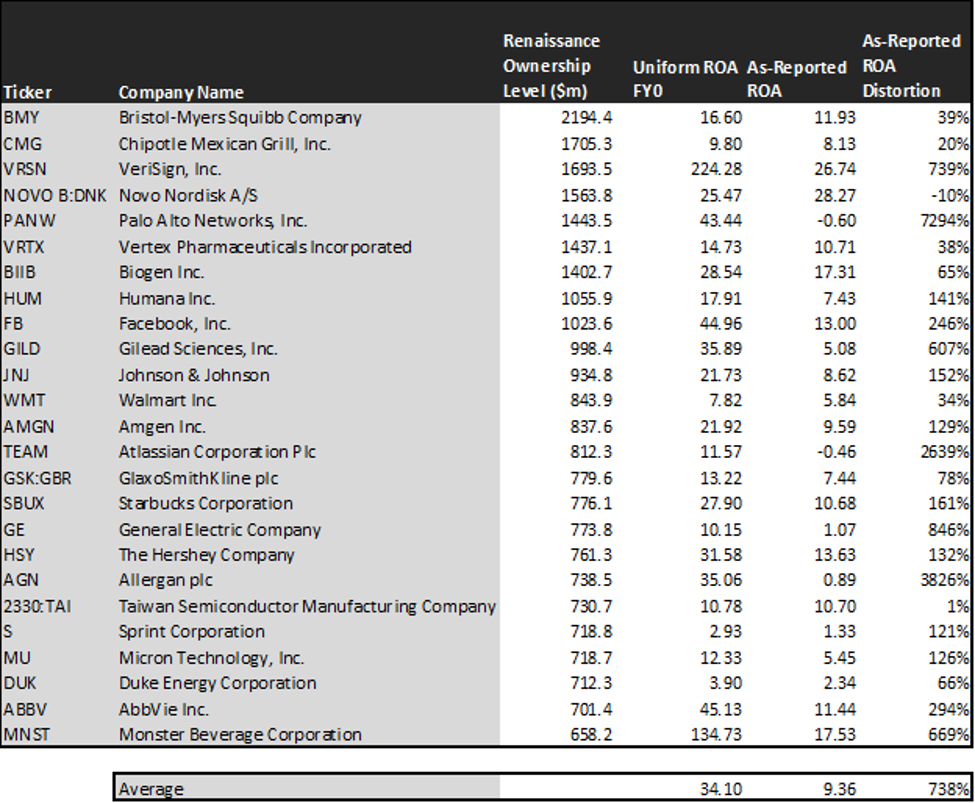 Using as-reported accounting, investors would be scratching their heads at some of the companies that Renaissance owns.

The average company in the portfolio displays an impressive average Uniform return on assets (ROA) at 34%. That’s well above the current corporate average returns. On an as-reported basis, many of these companies are poor performers with returns below 5%-6%, and the average as-reported ROA is only 9%.

On an as-reported financial metric basis, it would appear that Renaissance was identifying companies that were primed for an inflection in returns based on Renaissance’s other data, not that they were identifying strong companies.

However, once we make Uniform Accounting (UAFRS) adjustments to accurately calculate earning power, we can see that the returns of the companies in Renaissance’s portfolio are much more robust.

Once the distortions from as-reported accounting are removed, we can realize that Palo Alto (PANW) doesn’t have a -1% ROA, it is actually at 43%. Palo Alto is a strongly-positioned software security company that is both growing and producing impressive profitability for shareholders.

Similarly, Atlassian’s (TEAM) ROA is really 12%, not -1%. While fundamental investors are overly punishing the company thinking it is losing money, Renaissance’s quantitative strategy sees its strong profitability and visibility of earning power.

Allergan (AGN) is another great example of as-reported metrics mis-representing the company’s profitability. If Renaissance’s model was powered by that data, it wouldn’t be identifying the company’s strong fundamentals.

Allergan doesn’t have a 1% ROA, it is actually at 35%. Renaissance’s system appears to understand that the market pessimism for the company is overblown and that the company’s real fundamentals are strong enough to warrant upside.

The list goes on from there, for names ranging from Monster Beverage (MNST) and Abbvie (ABBV), to General Electric (GE), Gilead (GILD), and VeriSign (VSRN).

If as-reported metrics tracked the economic reality that Renaissance is identifying using their models, these companies wouldn’t show up in its portfolio, because they look like bad companies and poor investments. 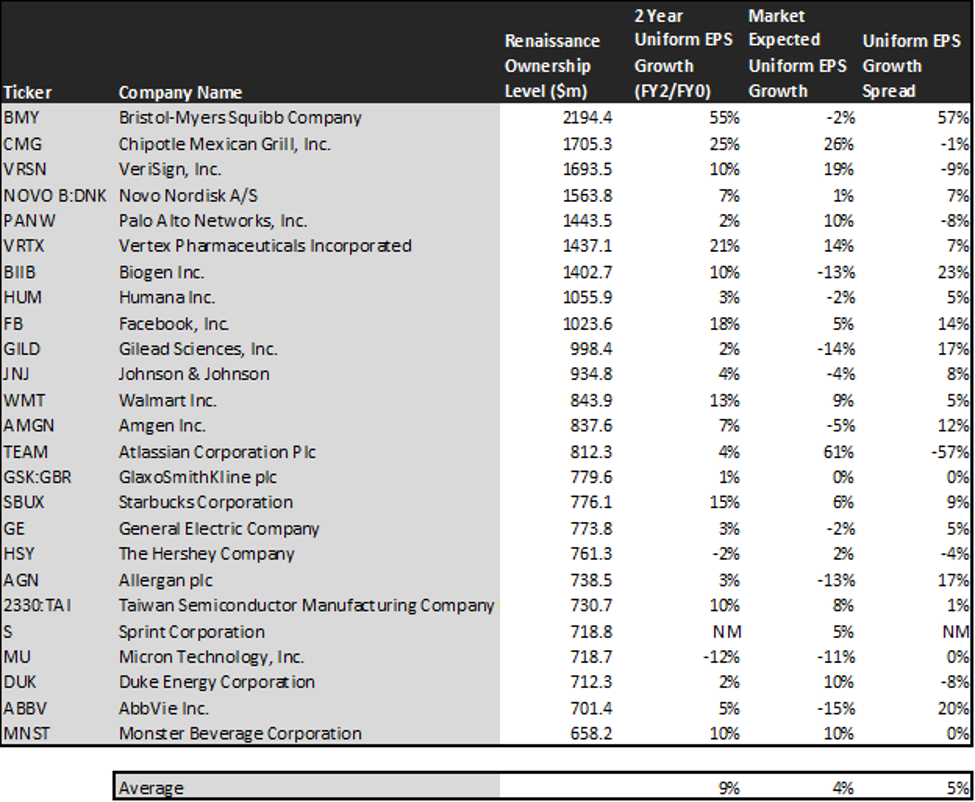 The average company in the US is forecast to have 5% annual Uniform Accounting earnings growth over the next 2 years. Renaissance’s holdings are forecast by analysts to outpace that, growing at a healthy 9% a year the next 2 years, on average.

Even when looking at median levels, the market is mispricing these companies earnings growth by 4%.

Another company with similar dislocations is Facebook (FB). Market expectations are for 5% growth in earnings. However the company is actually forecast for Uniform EPS to grow by a robust 18% a year. If it can deliver on this growth, there’s more upside, even after how far the company’s stock has rallied the past few years.

Yet another of the fund’s largest holdings, Gilead (GILD), which is priced for a 14% decline in Uniform earnings, when they are forecast to grow by earnings by 2% a year.

Unsurprisingly, considering the quantitative nature of the strategy, there are very few companies in the portfolio that look misplaced in this strategy. Only one name appears to have a significantly negative dislocation between what the market is pricing in and what is forecast.

Atlassian (TEAM), who we mentioned previously, is forecast to see Uniform earnings grow by 4% a year going forward, however the market is pricing the company for massive 61% annual earnings growth.

But for the most part, Renaissance’s quantitative portfolio looks like a high quality, undervalued set of stocks with businesses displaying strong earning power. It wouldn’t be clear under GAAP, but unsurprisingly, Uniform Accounting and a system built to deliver alpha see the same signals.

Low P/Es require low EPS growth to sustain them. In the case of BMY, the company recently had an average 21% Uniform EPS growth.

As such, we use Wall Street GAAP earnings estimates as a starting point for our Uniform Earnings forecasts. When we do this, we can see that BMY is forecast to only see Uniform EPS growth of 9% in 2019 followed by 121% in 2020.

Based on current stock market valuations, we can back into the required earnings growth rate that would justify $64 per share. These are often referred to as market embedded expectations. In order to meet the current market valuation levels of BMY, the company would have to have Uniform earnings sustain a 2% decline each year over the next three years.

What Wall Street analysts expect for BMY’s earnings growth is far above than what the current stock market valuation requires.

The company’s earnings power is 3x corporate averages, signaling that there is very low cash flow risk to the company’s operations and credit profile in the future.