It’s not always easy to sell super cheap products and still see robust returns. But this company shows us it can be done.

Hostess Brands is known for its iconic snacks and is able to leverage its size to see strong margins, yet the market doesn’t see that part of its story.

That’s why this showed up on our FA Alpha Screen. Its strong profitability, high growth, and attractive valuations make it a compelling company.

It’s easy to assume that cheap, processed food is a low-profit business.

Companies like Hostess Brands (TWNK), which is known for its snacks like Twinkies, HoHos, and Ding Dongs, can only sell their products at the lowest price possible to consumers. That means most of their products go for less than $1 each, especially when sold in bulk.

With such low prices and the need to sell through distributors and storefronts which also have to make a margin, it doesn’t seem like there’s enough money to go around for these kinds of pastry items.

Additionally, as public sentiment shifts towards choosing healthier foods, companies like Hostess are positioned to completely shut out.

This thesis makes sense when you look at as-reported metrics, which show us that Hostess’ return on assets (“ROA”) has been consistently below the cost of capital levels for the last five years.

In reality, Hostess Brands owns some of the most popular branded snacks on the market, and it’s a large enough company that it’s been able to manage costs down to a few pennies per snack.

Branded businesses are actually great businesses when the brand is desirable, and Hostess’ brands are still wildly popular.

That’s why, when looking at Uniform metrics, we can see that not only is Hostess a massively profitable business, but it’s also still growing substantially faster than people realize.

In contrast to what the as-reported basis shows, Uniform ROA has been more than six times the cost of capital for the last three years, sitting at or above 36% each year.

Even as it’s seeing robust profitability, it’s also seen some impressive asset growth. While Hostess Brands’ assets shrunk in 2019, growth inflected positively to 82% in 2020. Since then, asset growth has settled a bit, but it’s still sitting at a comfortable 13% during 2021. 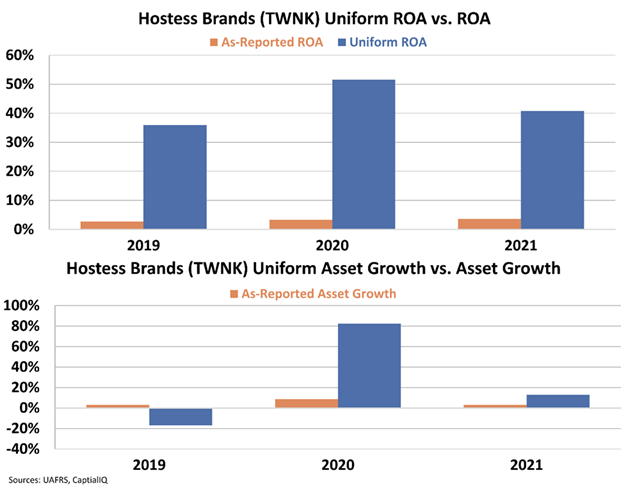 Companies with returns above 40% and consistent double-digit growth are the types of companies that typically deserve a premium.

However, as in Hostess’ case, the market is anchored on much weaker as-reported figures, which is why the company is just trading at market average valuations.

While Hostess may appear to barely be getting by as it sells its cheap snacks, it’s actually massively profitable.

Its high returns, strong growth, and affordable Uniform P/E of 21.6x are why it showed up on our FA Alpha 50 screen as a compelling name.

Throughout financial market history, many of the world’s most successful investors have been candid in their belief that Generally Accepted Accounting Principles (“GAAP”) distort economic reality.

Warren Buffett, for example, once said investors should “concentrate on the world of companies, not arcane accounting mathematics.”

Investors who neglect the very real issues with as-reported accounting can find themselves caught up investing with the crowd, blindly following hot “themes” without a thorough grasp of how to understand the businesses in question.

The only true way to focus on the “world of companies,” as Buffett suggests investors do, is to present a clear picture of how a business operates, something that can only be done by adjusting financial statements to reflect the arbitrary nature of certain accounting rules that leave much to discretion.

The world’s best investors understand the need to make these adjustments, which allows them to focus not on picking out the most popular companies, but rather on looking for great names in sleepy areas that the market isn’t paying much attention to. From there, the goal is to then identify quality companies with significant growth potential at reasonable prices.

That’s exactly what we’ve set out to do with the FA Alpha, our monthly list of 50 companies that rank at the top for quality, high growth, and low valuations.

This list has outperformed the market by 300 basis points per year for over 20 years now, effectively doubling the performance of the market by focusing on the real fundamentals and valuations of companies with our proprietary Uniform Accounting framework.

If you’re interested in seeing the other 49 names on this month’s FA Alpha, click here to learn more.