This dental supplier looks like a boring distributor, until Uniform Accounting highlights how its asset efficiency unlocks massive value

Today’s firm provides supplies for dental and medical practitioners across the country.

This company’s products are utilized in almost every dental office and it is set to benefit from an aging population. As-reported metrics show a boring, utility-like business earning low returns, but Uniform Accounting reveals the hidden value.

There are few businesses in the world more boring for investors than distributors. Distributors essentially act as middlemen, matching buyers and sellers.

This allows buyers to avoid going to multiple suppliers. Instead, the buyer has everything it needs in one place. The buyers pay for this convenience through slightly higher prices.

Grocery stores are a great example of a distribution industry. These companies provide customers a one-stop-shop for all food items. This is in place of going to the butcher for meat, farmers’ market for vegetables, or a farm to get your milk.

For putting all these products in a single location, grocery stores charge a mark-up. In addition, by buying in bulk directly from manufacturers, these companies get access to discounts.

Despite that, grocery stores are still very low-margin businesses. A big reason why is that the competitive moat for preventing other grocery stores for taking customers is small. It is largely on price or some effort to create “loyalty” through discounts, which yet again is a price competition dynamic.

This is true for most distributors.

And yet, distribution companies operate in every corner of the economy, proving their usefulness.

In the food industry, Sysco (SYY) provides distribution for restaurants, education, healthcare facilities, and other establishments. Sysco essentially acts as a grocery store for large institutions.

By doing the legwork in sourcing the goods, businesses are willing to pay a premium to buy straight from Grainger.

Similar companies are found across all different industries from tech to consumer goods to healthcare.

In the healthcare industry, Henry Schein (HSIC) operates much like Sysco and Grainger. It sells over 120,000 items, mostly in the dental healthcare space, directly to businesses and consumers.

It also has another 180,000 items available for special order. With over 3,600 field sales consultants, the firm can directly reach the offices of dental practitioners across the US and beyond.

By consolidating thousands of products under one roof and reaching directly to consumers, Henry Schein has established itself as a leading market player.

That being said, Henry Schein is still just a distributor… it’s no wonder as-reported returns are so low. We just established how hard it is when you compete solely on price, like most distributors do.

As-reported return on assets (ROA), have hovered just above cost-of-capital levels over the past decade. ROA’s have seen a steady decline from 8% to 6%, highlighting the low margins of the distribution business.

However, this picture of Henry Schein’s performance is inaccurate, propped up by distortions in as-reported accounting. Due to the GAAP treatment of goodwill, among other distortions, investors have missed the mark on the success of this firm.

Henry Schein has managed to create a successful distribution business, with high returns despite its low-margin nature.

The Uniform ROA for Henry Schein was in fact more than triple the as-reported numbers from 2010-2019. As you can see, Uniform ROA for the firm has fluctuated between 21% and 28% over the same timeframe.

Over the last 3 years, the firm has seen increases in Uniform ROA, while as-reported numbers remained stagnant or declined.

This is because margins are less important for Henry Schein and other distribution companies than the other metric that helps dictate ROA, asset turns.

Asset turns is a measure of how quickly a firm generates revenue in relation to its asset base. It explains how productive the company’s investments are.

However, once you cut through the noise, it becomes clear Henry Schein is very efficient in using its assets to generate revenue. Uniform turns have ranged from 2.7x to 4.6x over the past decade, and are currently at the higher end of that range.

Companies with low margins like Henry Schein can produce above market returns even with low margins by regularly turning over inventory at a high volume and using its assets productively. As it does this, its revenue begins to add up.

Henry Schein, Inc. Embedded Expectations Analysis – Market expectations are for Uniform ROA to compress, and management may be concerned about growth, supply chain issues, and China 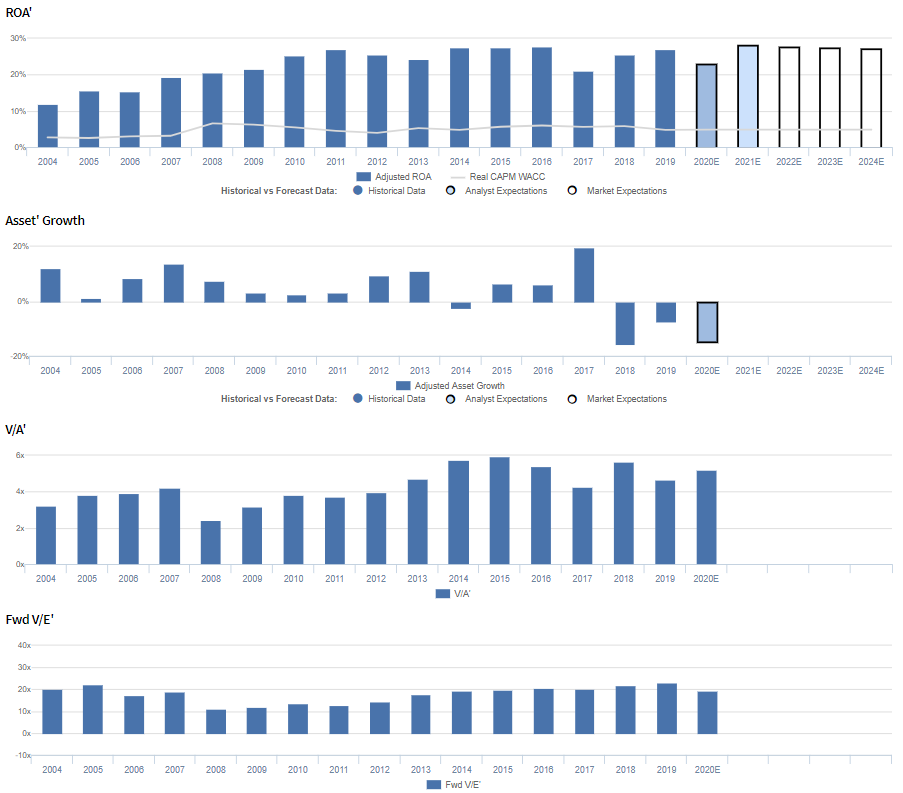 HSIC currently trades below corporate averages relative to Uniform earnings, with a 19.4x Uniform P/E (Fwd V/E’). At these levels, the market is pricing in expectations for Uniform ROA to sustain 27% levels through 2024, accompanied by immaterial Uniform asset contraction going forward.

Meanwhile, analysts have similar expectations, projecting Uniform ROA to decline to 23% in 2020, amidst coronavirus-related headwinds, before recovering to 28% in 2021, accompanied by 15% Uniform asset contraction.

Meanwhile, Uniform asset growth has been volatile, positive in thirteen of the past sixteen years, while ranging from -16% to 20%. 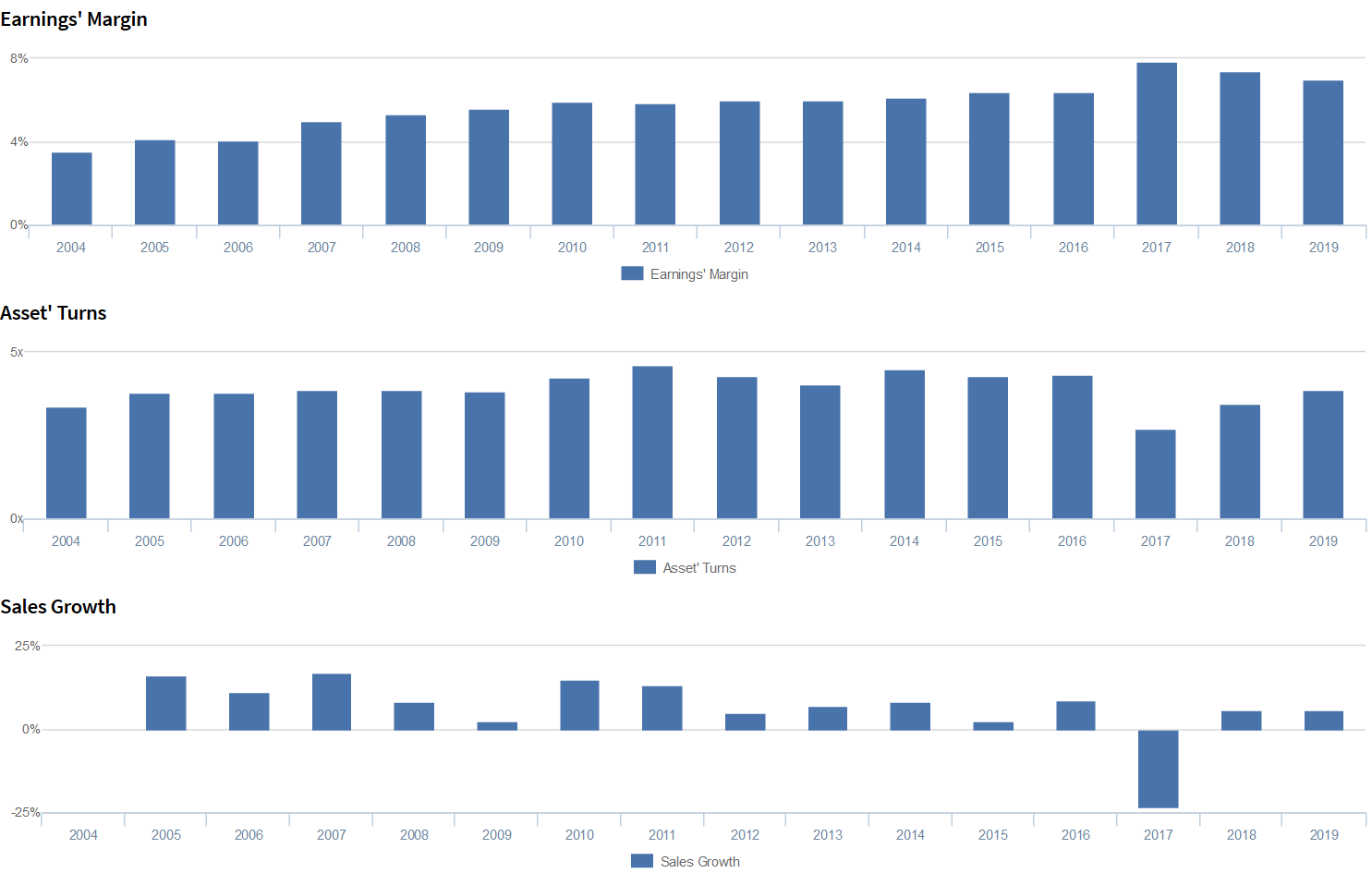 Improvements in Uniform ROA have been driven by generally compounding trends in Uniform earnings margins and Uniform asset turns.

At current valuations, markets are pricing in expectations for Uniform margins to remain at current levels, coupled with continued improvements in Uniform turns.

Valens’ qualitative analysis of the firm’s Q4 2019 earnings call highlights that management is confident they have established a dental software presence in Italy and Austria.

However, they may be concerned about their entry into the Nordic dental market, and they may lack confidence in their ability to sustain operating margin growth and drive non-cannibalizing growth in the Dental Service Organization (DSO) market.

In addition, they may be exaggerating the stability of the DSO market, their ability to mitigate COVID-19 headwinds, and the capabilities of Dentrix QuickBill. Moreover, they may have concerns about the potential of new product launches, manufacturers supply chain issues, and the continued closure of dental services in China.

Furthermore, they may lack confidence in their ability to enhance Dentrix Ascend and execute Henry Schein One opportunities. Finally, they may have concerns about their annual M&A spend and go-to-market approach, and they may be exaggerating their focus on university health.

As-reported metrics significantly understate HSIC’s profitability. For example, as-reported ROA for HSIC was 6% in 2019, materially lower than Uniform ROA of 27%, making HSIC appear to be a much weaker business than real economic metrics highlight.

Moreover, since 2004, as-reported ROA has maintained 5%-8% levels through 2019, while Uniform ROA has expanded from 12% to 27% over the same timeframe, directionally distorting the market’s perception of the firm’s historical profitability trends.

As the Uniform Accounting tearsheet for Henry Schein, Inc. (HSIC:USA) highlights, the Uniform P/E trades at 19.4x, which is below corporate average valuation levels and its own recent history.

Low P/Es require low EPS growth to sustain them. In the case of Henry Schein, the company has recently shown a 8% growth in Uniform EPS.

We take Wall Street forecasts for GAAP earnings and convert them to Uniform earnings forecasts. When we do this, Henry Schein’s Wall Street analyst-driven forecast is a 24% shrinkage in 2020, before a robust 39% EPS growth in 2021.

Based on the current stock market valuations, we can use earnings growth valuation metrics to back into the required growth rate to justify Henry Schein’s $68 stock price. These are often referred to as market embedded expectations.

The company can have Uniform earnings shrink by 2% over the next three years and still justify current prices. What Wall Street analysts expect for Henry Schein’s earnings growth is above what the current stock market valuation requires in 2021.

To conclude, Henry Schein’s Uniform earnings growth is below peer averages, but the company is trading above average peer valuations.