In a fast moving environment, it can be difficult to measure the impact of economic cabin fever

The term cabin fever originated during the settling of the frontier to describe those working deep in Northern Canada. Cabin fever is the mental or even physical ailments that arise when someone is cooped up in one place with little to do.

This can be amplified in the winter in particular, those who are more than just ‘stir-crazy’ with cabin fever can be diagnosed with seasonal affective disorder (SAD).

Not only has the quarantine impacted mental health, it also slowed down local economies in 2020. Many industries are still operating under restricted demand, and until the virus is under control, a full economic recovery will have to wait.

Additionally, it’s hard to keep track of how the economy is recovering. By the time monthly job reports come out, the story has likely already changed. Today, we dive into some less-covered indicators that can help us understand the recovery in real-time.

We may be seeing people talking more about cabin fever again, as people appear to be withdrawing once more now that the holidays are behind us. At least this is what a lot of real-time data is showing right now.

This is why looking at real-time data has become particularly popular since the onset of the pandemic. It allows analysts to get insight into economic data as it is unfolding, instead of weeks or months later.

One of the data composites we have access to and study regularly is the Jefferies’ JefData U.S. Economic Activity Index.

The chart below consolidates these indicators and attempts to measure aggregate activity throughout the pandemic. As you can see, after hitting lows in April, many of these indicators have steadily risen from May until December. 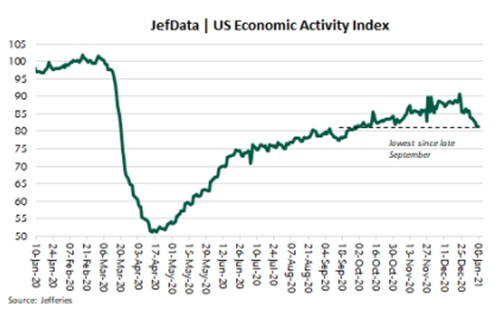 However, since December, the index has fallen to levels not seen since September. Folks are concerned about the virus resurging, political violence after what happened at the Capitol building earlier this January, and the drop in spending after the holiday season.

This is a signal that economic growth is likely to come under pressure. People are spending more time at home, not engaging with the economy.

By breaking this chart into smaller pieces, we can get a better sense of the driving force behind this drop. The chart below organizes the data points of the JefData Index by industry and shows change over time.

As with the aggregate chart above, there was a steady recovery across the board after April. This recovery was led by an unprecedented surge in housing, fueled by the “At-Home Revolution”.

After the new year, consumer spending and employment are pulling down economic activity, which is unsurprising as the holiday spending rush ended and temporary employment contracts expired. 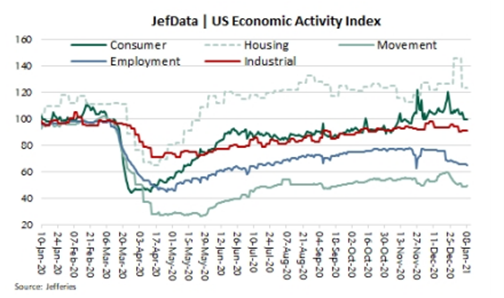 By looking at this short-term data, we can get a window into how the economy has rapidly shifted over the past few months. Unfortunately, the JefData does not show the path to a speedy recovery. This is particularly unfortunate for everyone battling cabin fever. Remember to exercise.