It Took a Maverick to Uncover This 7x Return Investment

Through the entire 1990s, the team went to the playoffs once, in 1990. They lost all 3 games in that playoff series. Mavericks fans had not seen a playoff win in over a decade when Cuban bought the team.

And yet, Cuban paid an eyewatering $285 million for the franchise. At the time, no one had ever bought an NBA franchise for more than $200 million. His acquisition raised more than a few eyebrows.

Who buys one of the most poorly run franchises in the league, in a football town, for 40%+ more than anyone had ever paid for another NBA team?

But Cuban understood something important..

The Mavericks’ worth had nothing to do with their record the past 10 years. What would matter is the potential growth drivers he could unlock in the business going forward.

That would determine whether he was overpaying for a trophy asset, or he was as savvy with this purchase as he had been in building Broadcast.com and selling it to Yahoo for $5 billion.

Cuban was an avid basketball fan. He had courtside seats next to the Mavericks bench before he ever became an owner. He had done his research. He could see opportunities to unlock, to justify the value of his investment.

He saw where he would drive growth in the business, and how he could make a significant return on his investment. He was confident in betting on growth when others were just focusing on valuing the business as it was.

He started by focusing on filling up the arena. He sold seats in the nosebleeds for $8 a game to get people in the door. He knew he’d make up the money on concessions. He raised the high demand courtside seat prices 10x, from $200 a seat to $2,000. People still came, they wanted to be on TV.

Importantly, he also invested in the team itself. The way to make real money on the team wasn’t to starve the product and wait to make money on the broadcasting and ticket sales as they stood today, it was to drive growth in all sides of the business by investing to facilitate that growth.

The team had a core of Steve Nash and Dirk Nowitzki, who had both joined the team prior to Cuban buying the team. He surrounded them with the players they needed. When the team needed rebounding, he brought in Dennis Rodman, the seven-time NBA rebounding champion.

His investment yielded a return on the court. The following 10 years, the Mavericks didn’t have a losing season. They won the NBA championship in 2011. But just as importantly, his investment benefited the business’ ability to throw off revenue.

He also had great timing. Cuban purchased the team just when the industry he had made his money in, media and the internet, were making the league more international. They were also making overall fan engagement in the league stronger.

Cuban’s focus on investing in growth in the business, and his timing in riding a macro wave have led to the Mavericks value rising to $2.3 billion today, according to Forbes. That’s a 7x+ return for Cuban from his investment 19 years ago.

That is the kind of return you only can generate if you are comfortable betting on growth.

Only by finding investments that can transform their cash flows, can one generate 7x returns.

As Driehaus himself has said:

“One market paradigm that I take exception to is: buy low and sell high. I believe far more money is made by buying high and selling at even higher prices.”

Driehaus doesn’t trouble himself with P/Es. If a P/E is high, but the earnings growth means the company can deliver, and already is showing strong results, his fund will jump in.

He doesn’t spend his time understanding what the company is worth and if its intrinsically undervalued. He focuses on if the company has positive operating momentum, and the ability to drive growth that can look like Cuban’s 7x return… or more.

“I believe you make the most money by hitting home runs, not just a lot of singles.”

One of Driehaus Capital’s flagship funds is the Driehaus Small Cap Growth Fund. While as-reported methodologies may distort these companies performance, looking at Uniform Accounting analysis can start to unlock the power of Driehaus’ strategy.

To show what we mean, we’ve done a high level portfolio audit of the Small Cap Growth Fund’s current portfolio, based on their most recent 13-F. This is a very light version of the custom portfolio audit we do for our institutional clients when we analyze their portfolios for torpedos and companies they may want to “lean in” on. 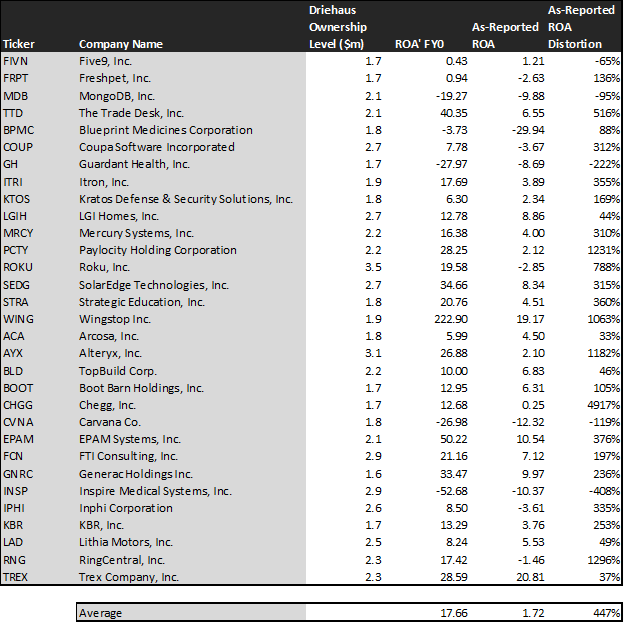 Growth in below cost-of-capital return businesses is value destructive. This isn’t the type of growth that the market would reward. If the Driehaus funds invested in poor performing companies, they wouldn’t be able to produce the outsized returns they are known for.

If Driehaus was looking at as-reported metrics, they would never pick most of these companies, because they look like bad companies, and poor investments. Not viable platforms to build growth of of. For the average company, as-reported ROA understates profitability by almost 90%. Uniform ROA is 450% higher than the distorted as-reported metrics.

That being said, there are some companies that Driehaus might need to do greater research on. Uniform Accounting shows these companies are poor performing companies that may not be the growth engines the fund is looking for.

Two that jump out are Inspire Medical Systems, who doesn’t have a -10% ROA, they have a -53% return. Similarly, Five9 is still a below cost-of-capital return business, even after making Uniform Accounting adjustments.

But Driehaus isn’t just finding companies where as-reported metrics mis-represent a company’s real profitability. The reason Driehaus has such phenomenal returns is because they’re identifying companies with good businesses with massive growth opportunities.

This is where Driehaus’ goal of buying high and selling higher comes into play. 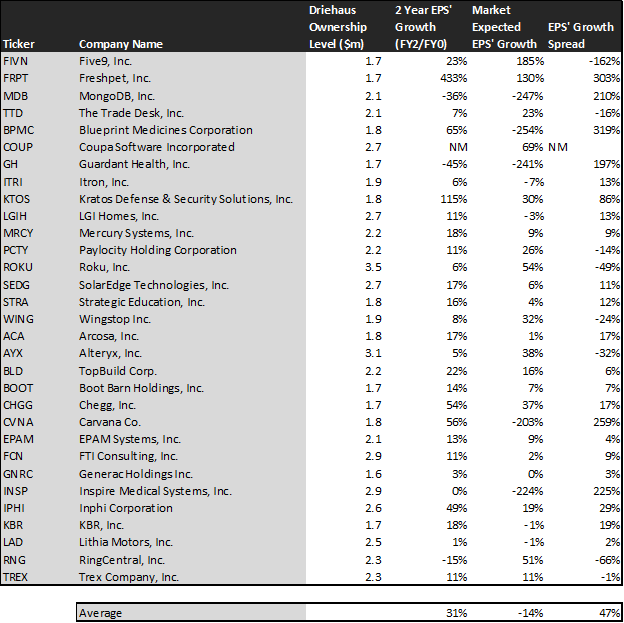 For context, this is even above their average as-reported EPS growth forecast, of 28% a year.

But not only is Driehaus Capital identifying companies that have stronger EPS growth than the average US company on a Uniform Accounting basis, they’re finding companies where the market is mispricing that earnings growth.

These are the kind of companies that don’t just double, they produce 7x returns or more.

One example of a company in the Driehaus portfolio that has massive growth that the market is mispricing is Kratos (KTOS). Kratos is forecast to have 115% Uniform earnings growth, but the market is only pricing the company to have 30% earnings growth each year the next two years. That is a massive pricing dislocation the market is going to have to react to.

On the other hand, there are some names we’d recommend Driehaus review in their portfolio if we were meeting with their PMs. Two that jump out are Five9 (FIVN) (again) and The Trade Desk (TTD).

Similarly, the market is pricing The Trade Desk to have 23% earnings growth going forward, when the company is only forecast to have 7% earnings growth. This does not look like the type of company that the Driehaus team would want to be owning once we see through the accounting noise.

But for the most part, Driehaus gets it right. And they get it right because they’re not trusting the as-reported accounting statements. Their focus on understanding growth better than anyone else is likely to continue to power strong returns and our Uniform Accounting portfolio review shows it.

Also, for those people who sign up to the offer before November 1st, we’ll include lifetime access to all of our newsletters, including our Market Phase Cycle and Conviction Long Idea List (a $6,000 value), for no extra charge, for as long as you remain a Valens Research app subscriber.

To read more about the offer and sign up, you can also click here – and read about another investing great, Seth Klarman..

Today’s tearsheet is for Disney. Disney trades at a slight premium to the market. At current valuations, the market expectations are for negative Uniform EPS growth, and growth significantly below last year’s levels. The company’s forecast earnings and valuations are in line with peers, but the company has robust profitability and no risk to its dividend yield.