This company successfully improved its business by adjusting its portfolio of business lines.

We have previously spoken about the pitfalls of high portfolio churn.

As a reminder, churn is the act of buying and selling parts of a portfolio of investments, either stocks, business units, or some other form of asset.

While some level of churn is necessary to manage a portfolio, high levels of churn are concerning.

If a portfolio manager has a high churn rate, it may indicate a lack of conviction about their investments. It also means higher fees that are impacting investor returns.

The same can be said for executive management teams and their business decisions.

In our November 12 Investor Essentials Daily, we highlighted two companies which have gone through periods of high business portfolio churn.

General Electric (GE) and United Technologies (UTX) are both serial acquirers who have a history of selling the smaller, less productive segments of their businesses.

It’s hard to constantly pick winners, and it’s expensive to keep buying and selling assets. Neither of these companies has been particularly successful in recent years, leading to stagnant returns.

That said, short-term churn is not always a bad signal.

Some companies genuinely stand to benefit from a portfolio overhaul, and that’s just what happened to Illinois Tool Works (ITW).

Illinois Tool Works is a conglomerate in its own right with a focus on industrial components and equipment.

Over many years, the company grew its business into more than eight reportable segments, including Automotive OEM, Food Equipment, Construction Products, among others.

Some of these segments proved to be more profitable than others, and management recognized the need to reorganize the business.

Over the next three years, the company sold out of its Decorative Surfaces business and reorganized its Power Systems & Electronics and Industrial Packaging units to focus more closely on its Welding business and Test & Measurement and Electronics unit.

This included the spinoff of its laminates and surfacing business in 2012 and a complete sale of the company’s Industrial Packaging segment in 2014.

In the short-term, the company’s as-reported profitability struggled as a result of the spike in portfolio churn, with ROA remaining below pre-recession levels through 2014.

Puzzlingly, over the same period, markets were rewarding the company. Illinois Tool Works slightly outperformed the market on a TSR basis.

Investors may have viewed this as an opportunity to short the company given its deteriorating fundamentals and market outperformance.

That said, once we look at the Uniform Accounting metrics, we can see that the market was more rational than you may realize.

Rather than having returns remain muted through the entire portfolio overhaul, Uniform ROA actually bottomed in 2009 during the back end of the Great Recession and steadily improved from there.

This has carried on in recent years, allowing Illinois Tool Works to continue focusing on the highest-margin parts of its business. Uniform ROA has expanded to a new high of 28% in 2018-2019.

The market followed the Uniform metrics all along.

That said, Illinois Tool Works has now been so successful that the market expects this recent ROA expansion to continue over the next several years. This may be too bullish.

Management may have concerns about ongoing integration issues with its recent batch of acquisitions and maintaining recent revenue growth rates.

If these concerns materialize, it could spell trouble for the company’s recent trajectory and may lead to market disappointment. 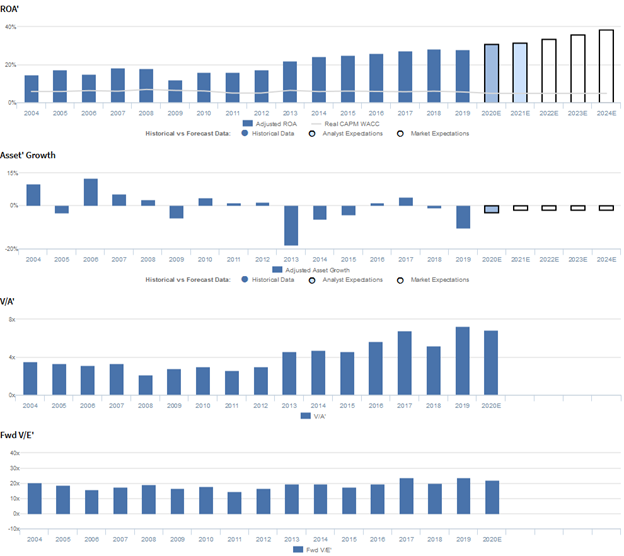 At these levels, the market is pricing in expectations for Uniform ROA to expand from 28% in 2019 to 38% in 2024, accompanied by 2% Uniform Asset shrinkage.

Analysts have similar expectations, projecting Uniform ROA to expand to 32% by 2021, accompanied by 3% Uniform Asset shrinkage.

Historically, ITW has seen generally improving profitability. After expanding from 15% in 2003 to 19% in 2008, Uniform ROA collapsed to 12% in 2009, amidst recessionary headwinds.

However, since then, Uniform ROA has gradually improved to current peak levels of 28% in 2019.

Meanwhile, Uniform Asset growth has been volatile, positive in only nine of the past 16 years, while ranging from -10% to 15%, excluding 18% shrinkage in 2013 related to the divestiture of their industrial packaging segment. 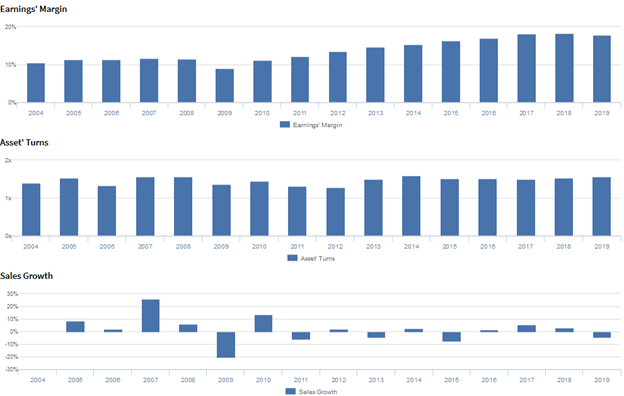 At current valuations, markets are pricing in expectations for expansion in both Uniform Margins and Turns.

Valens’ qualitative analysis of the firm’s Q3 2019 earnings call highlights that management may be exaggerating the value of their InSight dashboard and the accessibility of their WordPress product.

For example, as-reported ROA for ITW was 14% in 2019, only half of their Uniform ROA of 28%, making ITW appear to be a much weaker business than real economic metrics highlight.

Moreover, since 2012, as-reported ROA has been less than half of Uniform ROA in each year, significantly distorting the market’s perception of the firm’s recent profitability levels.

As the Uniform Accounting tearsheet for Illinois Tool Works Inc. (ITW) highlights, the Uniform P/E trades at 21.9x, which is around the global corporate average valuation levels and its own recent history.

High P/Es require high EPS growth to sustain them. In the case of Illinois Tool Works, the company has recently shown a 4% Uniform EPS shrinkage.

We take Wall Street forecasts for GAAP earnings and convert them to Uniform earnings forecasts. When we do this, Illinois Tool Works’ Wall Street analyst-driven forecast is 11% into 2019. That falls down to a 3% growth in earnings in 2020.

Based on current stock market valuations, we can back into the required earnings growth rate that would justify $168 per share. These are often referred to as market embedded expectations. In order to meet the current market valuation levels of Illinois Tool Works, the company would have to have Uniform earnings grow by 1% each year over the next three years.

To conclude, Illinois Tool Works’ Uniform earnings growth is in line with peer averages. Also, the company is trading at above average peer valuations.