Warren Buffett has many investing strategies that have served him very well over the years. One of his biggest strategies has been to make large, concentrated investments for a long period of his time. This way, when Buffett has conviction in an idea with a large position, he wins big.

Karthik Sarma, from SRS Investment Management, made a similarly large bet eleven years ago in Avis which finally paid off big. Let’s read on to see if any other holdings in the rest of his portfolio are set up for similar upside.

Warren Buffett has had great success over his decades as an investor thanks to his unique and well-thought out investment philosophy. His particular philosophy covers many approaches and disciplines, but one of his thoughts in particular comes into focus today.

One of his strategies around asset allocation is that diversification is for investors who are unsure about the quality of the companies they are investing in.

Diversification isn’t a major part of his strategy for that very reason. Since he is very confident in the margin of safety of his investments, he doesn’t want to be diversified. Rather he wants to make concentrated bets, and hold them for a very long time.

However, not everyone is as blessed as Buffett is when it comes to making concentrated investments with consistent gains every year.

For smart concentrated investors other than the Oracle of Omaha, they still end up with big wins, just a bit lumpier than Buffett’s tend to be.

A great example of this is SRS Investments. Karthik Sarma, who runs the fund, earned $2 billion last year, a total in excess of far better known players like Steve Cohen and Izzy Englander from Millennium.

His massive gains came thanks to an 11-year long bet on Avis Budget Group (CAR) which culminated in him owning 50% of the company’s stock.

When the stock finally took off due to severe car scarcity in 2020 and 2021, he finally reaped massive gains.

While Sarma and SRS had the smart lottery ticket that finally hit after over a decade, let’s use Uniform Accounting to see if the rest of the fund’s holdings are set up to reproduce his performance at the top of the list in the future. 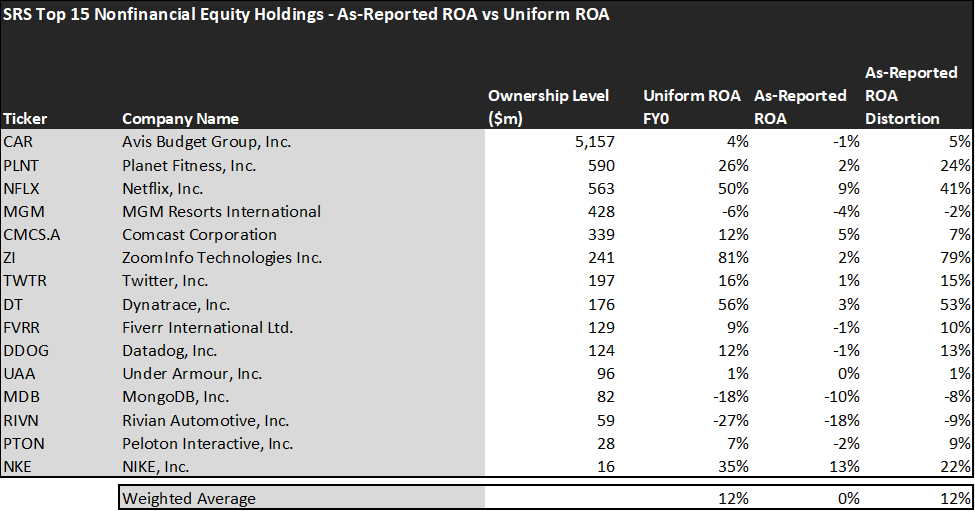 Contrary to what one might expect with the market correction in the past few months, most of SRS’s largest holdings remain in a better position than you would expect.

The average as-reported ROA among SRS’s top 15 names is a poor 0%. In reality, though, these companies perform more like a profitable company, with a 12% Uniform ROA.

One of the fund’s largest holding Netflix (NFLX), for example, doesn’t return a below average 9%. It actually provides drastically stronger returns, at a 50% Uniform ROA which takes into account their strong tailwinds from the pandemic as well as an increased content catalog.

Some of their other investments are also much stronger than they appear. For example, ZoomInfo Technologies (ZI) does not have 2% returns. Rather, as a company with a strong competitive position, it has an 81% Uniform ROA.

Furthermore, Dynatrace (DT) doesn’t have returns below cost of capital of 3%. Rather, they have immensely strong returns of 56%. 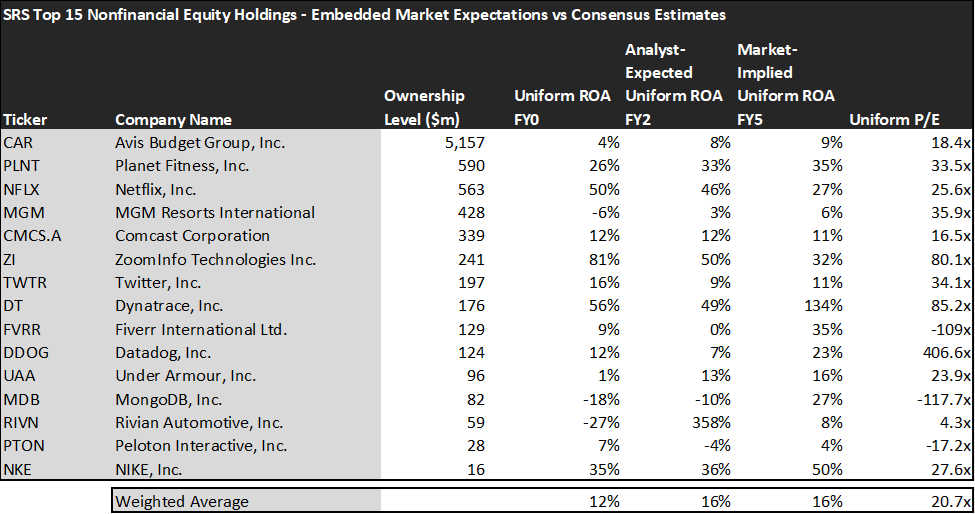 Embedded Expectations Analysis of SRS paints a clear picture of the fund. The stocks it tracks are strong, but the markets are already pricing them in for similar levels of growth.

Just as the fund has analysts expecting average ROA to increase to 16%, the market is also pricing these companies to grow their economic profitability to 16%.

However, a company like ZoomInfo (ZI) could also provide some dramatic upside for the SRS portfolio just as Avis was able to do. With the market implying only 32% Uniform ROA, analyst expectations of 50% ROA could be their next big ticket to large gains.

Read on to see a detailed tearsheet of the largest holding in SRS.

As the Uniform Accounting tearsheet for Avis Budget Group, Inc. highlights, its Uniform P/E trades at 18.4x, which is below the global corporate average of 24.0x, but around its historical average of 18.1x.

Low P/Es require low EPS growth to sustain them. In the case of Avis, the company has recently shown a Uniform EPS decline of 132%.

We take Wall Street forecasts for GAAP earnings and convert them to Uniform earnings forecasts. When we do this, Avis’ Wall Street analyst-driven forecast is for EPS to decline by 970% and 15% in 2021 and 2022, respectively.

Based on the current stock market valuations, we can use earnings growth valuation metrics to back into the required growth rate to justify Avis’ $208 stock price. These are often referred to as market embedded expectations.

The company is currently being valued as if Uniform earnings were to grow by 8% annually over the next three years. What Wall Street analysts expect for Avis’ earnings growth is below what the current stock market valuation requires through 2022.

Meanwhile, the company’s earning power is below the long-run corporate averages. Also, cash flows and cash on hand are slightly below total obligations—including debt maturities and capex maintenance. Moreover, intrinsic credit risk is 240 bps. Together, these signal moderate operating and credit risks.

Lastly, Avis’ Uniform earnings growth is below its peer averages, but is trading in line with its average peer valuations.