This investor uses informational advantages to follow in the footsteps of other investing greats. He has focused on being one step ahead of the market.

Uniform Accounting metrics highlight he is investing like he knows something that everyone else doesn’t. He invests in high-quality companies while betting their growth will significantly exceed current analyst forecasts.

Taking a look at his investing style can also give us clues into how he will run the newly bought New York Mets.

In addition to examining the portfolio, we are including a deeper look into one of the fund’s largest current holdings, providing you with the current Uniform Accounting Performance and Valuation Tearsheet for that company.

We wrote about hedge fund Point72 and its founder Steven A. Cohen in early January, and we wanted to revisit the firm in the wake of Cohen’s purchase of the Mets. Understanding his investment philosophy may help sports fans understand how he might think about running the baseball team.

As we highlighted in January, the story that might be most relevant to understanding how Cohen invests comes from an apocryphal story about Nathan Mayer Rothschild, the head of the Rothschild’s London branch.

Rothschild allegedly had a better flow of information about the goings-on across Europe than anyone, even governments themselves. This came into play when the Duke of Wellington was attempting to stop Napoleon’s resurgence after he returned from his banishment on Elbe.

Rothschild allegedly found out before anyone else in London that Wellington had been victorious. So he used that information to manipulate gilts, British bonds, in both directions, first selling them to create a panic, and then scooping up a massive volume of them at a discount before they surged once the news reached everyone else that Wellington won at Waterloo.

The story isn’t true, and yet it illustrates not just the reverence Rothschild was held in, but also the power of having an informational advantage.

Cohen has become synonymous with the chase for that incremental piece of data in modern finance, the information advantage. He had to turn S.A.C. Capital into a family office, Point72, for a few years explicitly because of accusations he settled about him having participated in insider trading, as he chased any marginal piece of incremental information.

And he has zero issues making sure people are well compensated to give him this information. There is a reason S.A.C. and Point72, both as a family office and now as a hedge fund again, have always been one of the biggest payers of brokerage fees on the street, he’s comfortable compensating you if you give him good information, knowing he’ll make more off the trade.

For many people trying to buy a sports team that has a checkered history like Cohen’s, the battles with the U.S. government might be a red flag enough for a professional sports league to deny him entry into their exclusive club. However, for Cohen, that wasn’t why there was significant debate about him entering.

The real reason other owners were concerned about him buying in was that they were worried about his philosophy of paying for an informational advantage. Initially, there were rumors they were trying to get assurances that he wouldn’t push a surge of spending on managers, scouts, an analytics department rebuild, and other areas where he could get an information advantage he’d be comfortable paying for.

They were worried that like Rothschild, his aggressive investment might mean he’d uncover a valuable insight from foreign shores, like future hall of farmers from Latin America, or find better analytics, and they’d be left behind.

They had every reason to be concerned too. Cohen likes to win and will spend to get the informational advantage to guarantee that win.

And that shows through in Point72’s portfolio.

The firm’s strategy is much more focused on trading than other investors we focus on. They are focused on uncovering marginal incremental data points to be ahead of the overall market in investing.

In a perfect world, Point72 wants to be Rothschild before the news of Wellington’s victory arrives in London. This meant their portfolio should be positioned for what is going to be discovered, for them to gain the maximum benefit.

Sometimes, that means Point72 might have a window into a stock that the market and analysts don’t even have. But even when that’s the case, they aren’t trying to buy companies that are years from turning around. Often, they’re investing in high-quality companies where they don’t also have to worry about being surprised.

We’ve conducted a portfolio audit of Point72’s top holdings based on their most recent 13-F.

Interestingly, while Point72 is clearly investing in high-quality companies, which as-reported metrics don’t show, but Uniform Accounting metrics do, there also is another interesting pattern for Point72’s ideas.

Point72’s strategy when investing is to look for better incremental data, and it appears to mean the fund is seeing the exact same signals Uniform Accounting is. 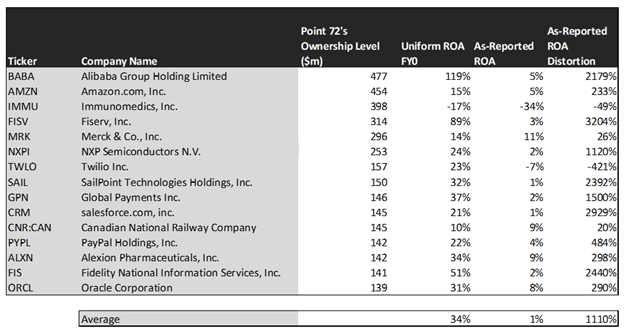 Using as-reported accounting, investors might think Point72’s idea of being ahead of the game is to buy poor-performing companies and hoping they turn around. However, an understanding of Uniform Accounting shows Point72 is simply buying high-return companies before the market realizes their strength.

The average company in the portfolio displays an impressive average Uniform return on assets (ROA) of 34%. That’s well above corporate average returns currently. On an as-reported basis, many of these companies are poor performers with returns below 5%, and the average as-reported ROA is only 1%.

We make Uniform Accounting (UAFRS) adjustments to accurately calculate the earning power of each firm. We can see that the returns of the companies in Point72’s portfolio are much more robust.

Once the distortions from as-reported accounting are removed, we can realize that Alibaba (BABA) doesn’t have a 5% ROA, it is actually at 119%. Alibaba is a world-beating company that is both growing and producing impressive profitability for shareholders.

Similarly, Global Payments (GPN) ROA is really at 37%, not at 2%. While fundamental investors are overly punishing the company for a potential poor acquisition strategy, Point72 recognizes its strong earning power.

Salesforce (CRM) is another great example of as-reported metrics misrepresenting the company’s profitability.

If Point72 was looking at as-reported numbers, they’d think they were investing in a company that wasn’t earning positive yet. The reality is that they were buying a strongly positive software and services machine.

Salesforce doesn’t have a 1% ROA, it is actually at 21%. Point72’s analysts are identifying a profitable company with good visibility they can benefit from.

The list goes on from there, for names ranging from Fiserv (FISV) and SailPoint Technologies (SAIL), to Fidelity National Information Services (FIS), PayPal (PYPL), and NXP Semiconductors (NXPI).

If Point72 was analyzing as-reported metrics, it might look like they never spent time analyzing these companies more deeply, because they look like bad companies and poor investments.

But to find companies where Point72’s analysts can isolate a few specific issues, you need companies that have more visibility, that are one-issue companies.

Point72 appears to be investing in those types of companies once you see through the noise using Uniform Accounting.

But to find companies that can deliver alpha beyond the market under Point72’s strategy, just finding companies where as-reported metrics misrepresent a company’s real profitability is insufficient.

To really generate alpha, Point72 has to find information others don’t know yet, perhaps even Wall Street analysts. 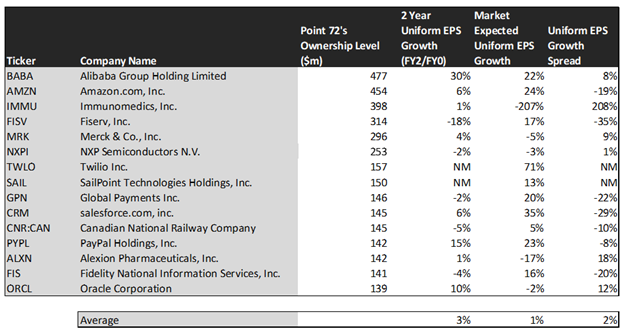 The average company in the US is forecast to have 5% annual Uniform Accounting earnings growth over the next two years. Point72’s holdings are forecast by analysts to grow at 3%.

If Point72 is trying to find strong return, higher growth companies, these don’t appear to be it.

Normally, when we analyze this table, we want to find companies where the companies are growing, but the market expects them to grow less than Wall Street analysts forecast.

However for Point72, what it appears Cohen is focused on companies with low market expectations, but ones that he also thinks analysts are behind the curve on. Analysts raising their estimates will help boost the performance of these companies.

One example of a company Point72 appears to be betting on analysts needing to raise estimates for is Amazon (AMZN). Amazon’s analyst forecasts have 6% Uniform earnings growth built in, but the market is pricing the company to have earnings rise by 24% earnings each year for the next two years.

Another company with similar dislocations is Fidelity. Expectations may look modest with market expectations for a 16% growth in earnings. However, the company is actually forecast for Uniform EPS to shrink by 4% a year.

The company will need to surprise on the upside to not disappoint the market, and analysts will need to raise estimates for the stock to go higher. That appears to be what Point72 is anticipating.

That being said, some of Point72’s investments are mispriced in a more traditional way, where analyst expectations are higher than market expectations. These companies are intrinsically undervalued, not just catalysts stocks waiting for a bump.

Alexion Pharmaceuticals (ALXN) is forecast to see Uniform earnings rise by 1% a year going forward. However, the market is pricing the company for 17% annual earnings shrinkage.

But for the most part, Point72’s strategy appears to be to invest in high quality, higher growth companies that have the potential to surpass all expectations.

It wouldn’t be clear under GAAP, but unsurprisingly Uniform Accounting shines a clear light on the fund’s strategy.

If Cohen applies this investment philosophy to his Mets strategy, we should see a heavy focus on information advantages, and uncovering “diamonds in the rough” prospects.

Cohen’s focus on gaining an information advantage will likely see him employing large sums of money to create the best scouting and analytics department in the league. Additionally, Cohen will be the richest owner in the MLB and should have no trouble financing the team.

All signs point to a new era for the Mets, with a heavy focus on numbers and gaining an information edge over other teams. If Cohen can have as much success in the baseball world as he has in investing, the Mets may be headed for a turnaround.

High P/Es require high EPS growth to sustain them. In the case of Immunomedics, the company has recently shown a 218% Uniform EPS growth.

We take Wall Street forecasts for GAAP earnings and convert them to Uniform earnings forecasts. When we do this, Immunomedics’s Wall Street analyst-driven forecast is a 98% and 1,336% Uniform EPS decline in 2020 and 2021, respectively.

Furthermore, the company’s earning power is well below the corporate average. However, cash flows and cash on hand are nearly 5x their total obligations—including debt maturities, capex maintenance, and dividends. Together, this signals low credit and dividend risk.

To conclude, Immunomedics’s Uniform earnings growth is below peer averages in 2020, but the company is trading well above average peer valuations.