The Battle to be the Monte Carlo of the West

In the 1950s, Las Vegas’ position as the preeminent destination for gambling in the Americas wasn’t yet secure.

The mob and others had heavily invested in Vegas and business was booming, but there was a rival constantly threatening Vegas.

Most people now think of Cuba as Castro’s island, a communist bastion in the Caribbean 90 miles from the Florida Keys.

But as anyone who’s seen the Godfather Part II would know, before Castro’s uprising, Havana was a booming gambling destination.

It was Vegas’ rival as the Monte Carlo of the Western Hemisphere.

However, for most of Vegas’ casino owners, legitimate and otherwise, who won made no difference to them. Many, like the Las Vegas Desert Inn’s owners, and the Sands’ ownership, invested in both places. As long as gambling rose, they’d win.

In the end, Las Vegas won out, thanks to Castro’s intervention. Once his revolution succeeded, he put an end to Havana’s dream of unseating Vegas as the gambling mecca of the Americas.

While government intervention led to significant losses for the casino investors, the companies never forgot what they learned. It was better to be part of the action any time a rival to Vegas opened, instead of fighting it.

So in the 2000s, as Macau started to reduce their gambling regulations, in particular removing the monopoly they had granted previously on gambling, Vegas casino companies saw the opportunity and jumped in.

Wynn (WYNN), Galaxy, MGM Mirage (MGM), and others started to invest heavily in the massive opportunity that was a gambling destination on the shores of the most populous nation on earth.

The company that jumped in most heavily to the Monte Carlo of the Orient though was Las Vegas Sands (LVS).

They own the Sands Macao, the Plaza Macao, Sands Cotai Center, The Parisian Macao, and the largest casino in Macao, the Venetian Macao.

They invested so massively in Macao that the city state currently makes up over 60% of their operations.

This was great when Macao was growing, but now with concerns about China’s growth, the trade war, and intermittent crackdowns on money laundering through Macao, Las Vegas Sands’ exposure has been a headwind for the stock, especially over the past 2 years.

Join us for The Uniform Accounting Webinar this Friday

This Friday, we’ll be hosting a webinar highlighting the massive distortions that are inherent in as-reported accounting.

We’ll also discuss how Comcast is more expensive than investors think, as its P/E is really 22x, not 14x.

Market expectations are for Uniform ROA to decline, but management is confident about growth, profitability, and Macao 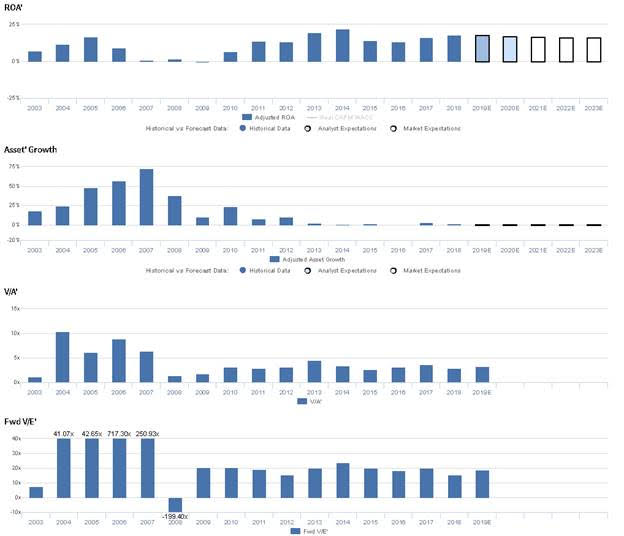 LVS currently trades below corporate averages relative to UAFRS-based (Uniform) Earnings, with an 18.6x Uniform P/E. At these levels, the market is pricing in expectations for Uniform ROA to decline from 18% in 2018 to 16% in 2023, accompanied by immaterial Uniform Asset growth going forward. 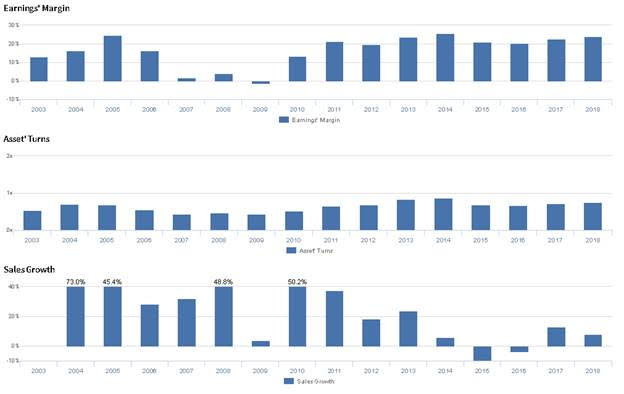 Valens’s qualitative analysis of the firm’s Q2 2019 earnings call highlights that management is confident they invested in Macao before competitors and their previous resorts have seen consistent growth. Furthermore, they are confident that Macao customers drive profitability through their betting trends, and they are confident there are other market opportunities to offset headwinds related to slowdowns in the junket industry.

Uniform Accounting metrics also highlight a significantly different fundamental picture for LVS than as-reported metrics reflect. As-reported metrics can lead investors to view a company to be dramatically stronger or weaker than real operating fundamentals highlight. Understanding where these distortions occur can help explain why market expectations for the company may be divergent.

Today’s tearsheet is for Boeing. Boeing trades around market average valuations. The company has historically had strong Uniform EPS growth, and after forecast massive decline in EPS in 2019, this is expected to continue in 2020. At current valuations, the market is expecting the company to actually have no significant earnings growth going forward. The company’s earnings growth is below peer average levels, but the company is trading at peer average valuations. The company has strong profitability, and no risk to their dividend yield.