This company is in the “other sin industry,” Uniform Accounting highlights investors should pay attention to this “vice” stock

During this COVID-19 global pandemic, two of the biggest trends are staying at home and general uncertainty and risk from the disease itself. This pandemic has caused immense economic stress, as most businesses have been hit very hard.

But, as with most recessions, some “sin” or “vice” stocks are doing well. This company is a major participant in the other “sin” industry that investors don’t normally think about.

While as-reported metrics signal the company hasn’t benefited from increased demand, Uniform Accounting shows the reality—being a “sin” stock has been a positive for fundamentals.

Sin stocks refer to companies that are involved in activities or trades that are considered immoral or unethical.

These types of stocks include tobacco, alcohol, weapons manufacturing, and gambling.

Despite the questionable ethics and morals of the businesses these companies find themselves in, sin stocks tend to be profitable, even more so during times of economic stress.

There’s a general perception that sin stocks, companies in “vice” industries, do well in an economic downturn.

People who are down on their luck after losing their jobs might turn to alcohol to cope. They may attempt to gamble to try to have a big win to solve their cash issues.

Of course, the coronavirus pandemic driven shutdown of the global economy hasn’t been a normal slowdown.

While sports betting was starting to boom in America in 2019, once many states started opening up the industry, casinos are now empty to help with social distancing. There can be no betting on sports if there’s no sports to bet on.

But the alcohol industry is certainly doing well in the current shutdown.

With more people staying at home right now, people are turning to snacks such as cookies, crackers, and chocolate bars to self-sooth.

While not considered as a traditional sin stock, the high consumption of snacks during this shutdown has turned the company into a supplier of the “other sin industry.”

A company that was spun off and the legal successor of Kraft Foods, Inc., Mondelez is a provider of some of the world’s popular snack foods.

These products include the likes of Oreo, Cheez Whiz, Sour Patch Kids, Belvita, and much more. Go to a nearby grocery, and you’ll most likely see one of their products regularly stocked up on their shelves.

While other food products do well locally and falter internationally, Mondelez’ lineup of brands have become household names globally.

Despite the popularity of their products, as-reported metrics show that being the “other sin industry” has only resulted in weak returns for the company.

The low 3.7% return on assets (ROA) shows that Mondelez is not particularly profitable.

But in reality, Mondelez is doing much better than what as-reported metrics are telling us.

The name value of their brands has helped them become very successful, becoming a trusted name among consumers. Their targeted acquisitions helped them expand their product range.

Uniform Accounting reflects this as well, with Mondelez’ ROA consistently trending above 20% since 2012, and significantly high recently. That’s double the market average returns.

The company’s strong product catalog and the consumer’s high demand has benefited the company. With the current pandemic requiring people to stay at home, the demand and consumption should remain high.

Management had concerns about growth and market share heading into the pandemic, but being a “vice” company may mean it is in the right place at the right time to solve those issues. 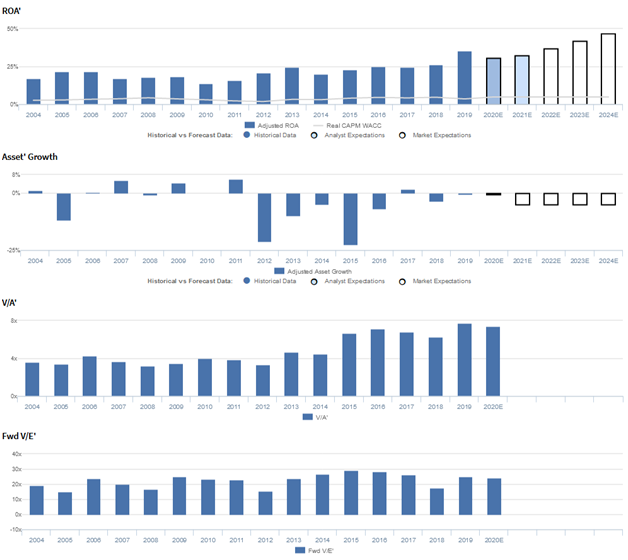 At these levels, the market is pricing in expectations for Uniform ROA to rise from 36% in 2019 to 47% in 2024, accompanied by 5% Uniform asset shrinkage forward.

However, analysts have more bearish expectations, projecting Uniform ROA to decline slightly to 32% by 2021, accompanied by 1% asset shrinkage.

Meanwhile, prior to 2012, Uniform asset growth had been historically volatile, positive in six of eight years, while ranging from -12% to 6%.

However, since spinning off Kraft Foods Group in 2012, Uniform asset growth has been consistently negative, ranging from -23% to -1%, excluding outlier 2% growth in 2017, as the firm has been divesting underperforming assets. 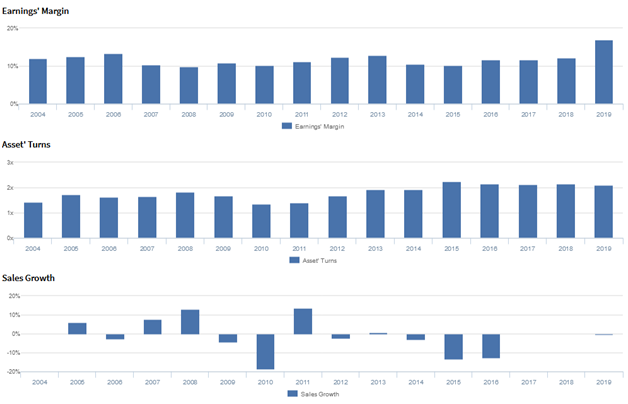 At current valuations, markets are pricing in expectations for both Uniform earnings margins and Uniform asset turns to expand to historical highs.

Valens’ qualitative analysis of the firm’s Q3 2019 earnings call highlights that management is confident in their cost discipline.

However, they may lack confidence in their ability to sustain growth in adjusted EPS and biscuit and chocolate sales in Southeast Asia, the UK, Australia, and Russia.

Moreover, they may lack confidence in their ability to expand their gum and candy market share in China and France, improve profitability across segments, and manage SG&A costs.

Furthermore, management may be downplaying concerns about chocolate competition in the US and China, macro pressures in the UK and Brazil, and US market pricing pressures.

Finally, they may be concerned about their marketing strategy, and they may be exaggerating their ability to drive volume growth across their US biscuit and European chocolate businesses.

For example, as-reported asset turnover was 0.4x in 2019, materially smaller than Uniform Asset Turns of 2.1x in the same year, making MDLZ appear to be a far less efficient business than real economic metrics highlight.

Moreover, as-reported asset turnover has been roughly one-fourth of Uniform Turns in each year since 2013, distorting the market’s perception of the firm’s historical asset efficiency trends.

High P/Es require high EPS growth to sustain them. In the case of Mondelez’s, the company has recently shown a Uniform EPS growth of 43%.

We take Wall Street forecasts for GAAP earnings and convert them to Uniform earnings forecasts. When we do this, Mondelez’s Wall Street analyst-driven forecast is for Uniform EPS shrinkage of 14% in 2020, which rebounds to a growth of 8% in 2021.

Based on current stock market valuations, we can back into the required earnings growth rate that would justify $53 per share. These are often referred to as market embedded expectations. In order to meet current market valuation levels, Mondelez would have to have no growth in Uniform earnings each year over the next three years.

What Wall Street analysts expect for Mondelez’s earnings growth is far above what the current stock market valuation requires.

Meanwhile, the company’s earnings power is 6x corporate averages. However, their cash flows and cash on hand are below their total obligations—this includes debt maturities, maintenance capex, and dividends—which signals that there is a high risk to the company’s operations and credit profile.

To conclude, Mondelez’s Uniform earnings growth is below peer averages while price to earnings is in line with peer average valuations.