As cult-like followings for these stocks sprang up on social media platforms such as Reddit, it kicked off a wave of “meme stock” mania. As individual investors got in on the action, many expected the SEC to clamp down on short-selling in some form.

Today, we will discuss the SEC’s response to short selling, and what short selling trends in general mean for market health as a whole.

Early last year, both financial and traditional media outlets were swept up in the meme stock mania. Retail investors sought to undermine what they believed to be out-of-touch billionaires who had made their money on similar trades.

With multiple hedge funds shorting more shares of GameStop than were available, a cascading number of purchases by these retail investors forced hedge funds to cover their positions – driving stock prices much higher.

Decentralized but emphatic positions in these meme stocks caused some of the largest hedge funds in the world to nearly collapse along with several brokerages to experience technical difficulties due to heavy loads. After such a fiasco, most financial institutions would probably like to forget about last year’s meme stock mania.

Similarly, most institutional investors would say that the meme stock mania mess rests solely on the shoulders of the individual investors who initiated the short squeeze.

Unfortunately for these institutions, the U.S. Securities and Exchange Commission (‘SEC’) doesn’t see it that way.

In a watershed moment for investing earlier this year, the SEC didn’t come down on new rules to make trading more restrictive for individual investors.

Instead, the commission decided that it should give institutional investors the opposite of what they were clamoring for. The SEC ruled that the mania happened because regulatory agencies didn’t have enough oversight into large investors’ operations, making a short squeeze possible.

To fight this issue going forward, the SEC decided that the possibility for short squeezes to create volatility meant that the commission needed more disclosures about short positions in investors’ books.

As the SEC works through the different regulations it would like to impose, financial institutions now have to consider the effect these rules will have on their operations.

Most recently, SEC Chairman Gary Gensler proposed that any institutional investor with more than $10 million or 2.5% of a company’s shares being shorted would be required to disclose it.

The act of having short positions themselves aren’t being regulated directly. Instead, investors must disclose these positions so the commission can improve risk controls around it.

Of course, institutional investors and hedge funds that use the practice of short selling more liberally cried foul about the increased regulation.

However, hedge funds should be used to more oversight in short selling regulations. After minimal changes to short sale practices since the first rules were adopted in 1938, an overhaul was only introduced in 2005 under what’s called Regulation SHO.

Since then, continued regulatory changes have been a consistent trend surrounding short sale practices as a way to fight persistent concerns about short sales.

While financial institutions have adopted these changes in the past, their pushback was that these new disclosures would only lead to more short squeezes. This time though, it doesn’t appear that, under Regulation SHO, the SEC is listening to them.

Looking at the numbers, most hedge funds don’t have much to worry about. A quick check in on short levels shows that the majority of funds don’t hold that many short positions in aggregate.

As a result, regulators and individual investors alike won’t feel a lot of sympathy for hedge funds disclosing their short books with a historically minimal impact.

A look at the total shares shorted in the Russell 1000 Index allows us to map short interest over time. As you can see in the chart below, as the market has been rocketing higher the past several years, short interest levels currently sit at historically low levels since 2012. 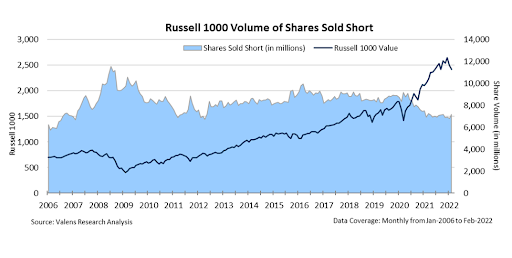 Even after seeing a market correction in recent months, not many investors are betting that the market will go down. These low short levels act as another signal that institutional investors aren’t bearish on the future.

Low short levels serve as a contrarian measure against the consensus… It’s a valuable signal, considering that investors often find the best trades in the markets by going against the herd. With most investors largely bullish on the market as a whole, this might give investors some pause in the short term.

That does not mean that we believe – nor does the data show – that investors should be concerned about the overall health of the market.

While the fundamentals of the market still show strength, this is just one signal that points to an overheated market in the next few months.