Paperwork is one of the most important processes in healthcare, ensuring that all medical and patient records are tracked and kept. However, this is a tedious process that takes up so much time.

This software company helps solve this problem by introducing voice recognition technology. While the technology has brought in numerous innovations, as-reported metrics show weak returns. In reality, Uniform Accounting shows that it can generate robust earnings too.

Along with treatment and care, paperwork is one of the most time-consuming tasks for medical professionals.

It is essential to ensure treatments and diagnoses are properly documented. This can include nursing logs, doctor’s notes, medicine intake, heartbeat monitoring charts, and much more.

This data is used to find ways to improve care in the future. Data is also used to protect against potential lawsuits should anything go wrong during patient care. It is also vital to get reimbursement from insurers.

So any way that the data can get transferred in a more efficient way is an incredible value add for doctors and other medical professionals.

One way to save time with all this documentation is to verbalize all of this data through speech recognition software, instead of having to transcribe it manually. This is what Nuance Communications, Inc. (NUAN) specializes in.

One of the leading names in speech recognition and artificial intelligence, Nuance has been innovating their technology for years, for end markets like the medical field, among other customer groups.

Their technology is also used in call centers, where voice recognition software is on high demand. Other uses include customer service improvement, voice identification, and security tools.

Initially designed to recognize a limited number of phrases and words, Nuance gradually developed their technology to become one of the most sophisticated in the industry.

With a high level of innovation and their ability to fill the needs of companies and industries, one would think that this translates into solid returns. However, as-reported metrics would show otherwise.

Nuance’s 3% return on assets (ROA) in 2019 appears to be a signal that while their technology is useful, their customers don’t think it’s valuable enough to pay a premium price for it.

But the reality is, Nuance’s products do add significant value for its customers. And its customers are willing to pay for the value they get from Nuance’s offerings. It’s just that as-reported metrics mask that reality.

As more industries seek to improve their efficiency, automate voice tasks, and in general rely more on voice technology as an easier way to gather data data and do business, Nuance could continue to benefit.

Nuance Communications, Inc. Embedded Expectations Analysis – Market expectations are for a Uniform ROA recovery, but management may be concerned about their positioning, performance, and Dragon Medical 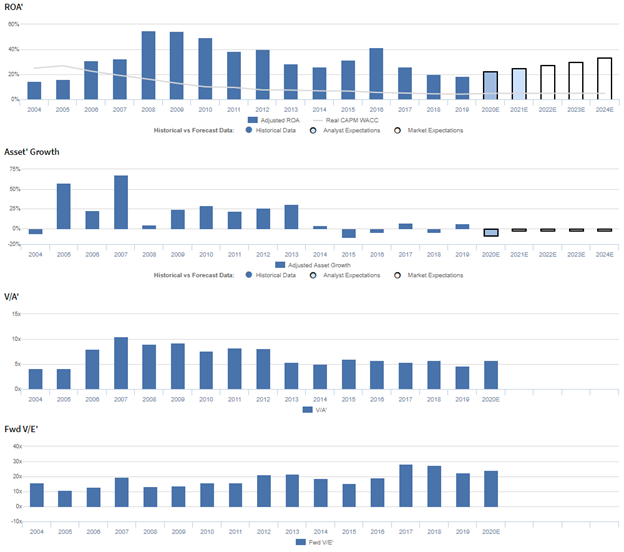 At these levels, the market is pricing in expectations for Uniform ROA to expand from 19% in 2019 to 35% in 2024, accompanied by 3% Uniform asset shrinkage going forward.

Analysts have similar expectations, projecting Uniform ROA to improve to 25% by 2021, accompanied by 9% Uniform asset shrinkage, stemming from their spin-off of Cerence Inc. 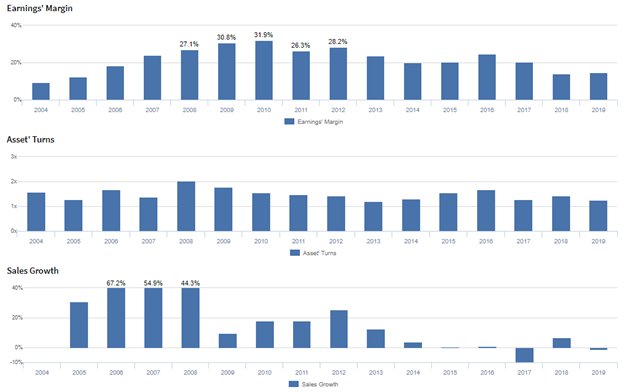 At current valuations, markets are pricing in expectations for a reversal of recent declines in both Uniform margins and Uniform turns.

Valens’ qualitative analysis of the firm’s Q4 2019 earnings call highlights that management is confident they are prioritizing their business lines and are committed to making capital allocation choices that drive shareholder value.

However, they may be exaggerating the strength of their market positioning in healthcare and enterprise AI, their focus on driving growth and recurring revenue, and the benefits of their partnership with Microsoft.

Moreover, they may be concerned about their business investments and the sustainability of their Q4 performance.

Finally, management may be exaggerating the ability of their omni channel cloud platform expansion to allow smaller organizations to access their technology, and they may lack confidence in their ability to sustain Dragon Medical conversion performance.

For example, as-reported ROA for NUAN was just 3% in 2019, substantially lower than Uniform ROA of 19%, making NUAN appear to be a much weaker business than real economic metrics highlight.

Moreover, as-reported ROA has never exceeded 2%, while Uniform ROA has not fallen below 19% since 2006, distorting the market’s perception of NUAN’s historical profitability ceiling for nearly two decades.

As the Uniform Accounting tearsheet for Nuance Communications, Inc. (NUAN) highlights, it trades at a 25.4x Uniform P/E, which is above corporate average valuations, but around its historical average valuations.

Average P/Es require average EPS growth to sustain them. In the case of Nuance, the company has recently shown a robust Uniform EPS growth of 24%.

We take Wall Street forecasts for GAAP earnings and convert them to Uniform earnings forecasts. When we do this, Nuance’s Wall Street analyst-driven forecast is for Uniform EPS to grow by 26% and 15% in 2020 and 2021, consecutively.

Based on current stock market valuations, we can use earnings growth valuation metrics to back into the required growth rate to justify Nuance’s $21 stock price. These are often referred to as market embedded expectations.

In order to meet current market valuation levels, Nuance would have to have Uniform earnings grow 10% each year over the next three years.

What Wall Street analysts expect for Nuance’s earnings growth is higher than what the current stock market valuation requires.

To conclude, Nuance’s Uniform earnings growth and company’s price to earnings are both in line with peer averages valuations.