Our last history lesson takes us into a Pax Americana

Every Monday for the past few weeks, we have spent some time digging into the similarities between the U.S. economy after World War II and today.

Coming back from WWII, as soldiers returned from service, they were looking to spend. Meanwhile, as the economy was on wartime footing, supply chains were misaligned.

Spending coming back after the pandemic is similar to this phenomenon almost 70 years ago, which is why we have spent so long outlining the similarities. Similar to now, this mismatch caused an inflation-driven recession.

Today is our last update on how the economy of the 1940s and 50s played out, and what it spells for the American economy of 2022 and beyond.

As you know, inflation has been at historically high levels for much of this year. The Consumer Price Index (“CPI”) accelerated to an annualized rate of more than 9%.

And it’s clear that American consumers are feeling the pain in their wallets. Prices of gas, groceries, household goods, and pretty much everything else are up significantly in 2022.

This inflation surge is the main driver of the current “recession in name only” we’ve talked about recently.

But according to the latest data, inflation is cooling down—at least for a month…

The U.S. Bureau of Labor Statistics said last week that the CPI came in at 8.5% in July. That’s the lowest year-over-year reading so far this year. Additionally, “core CPI”—which excludes food and energy prices—came in at 5.9%.

That’s below Wall Street expectations of 8.7% and 6.1%, respectively. Notably, it’s the first time the CPI came in lower than expected since our supply-chain woes started.

This backward-looking data hints that we finally might be seeing “peak inflation.”

And the forward-looking data on inflation looks even better.

It’s exactly like it sounds… It’s a combination of two terms—”now” and “forecasting.”

In short, the Cleveland Fed pulls together a bunch of smaller datapoints to paint a picture on where inflation is now—and where it’s heading. The indicator is closely watched on Wall Street.

On July 20, the Nowcast forecast for CPI in the third quarter equaled 9.1%. But as of the most recent data from Friday, the forecast was for 6.2%. That’s a dramatic drop.

The Fed’s priority is fighting inflation right now. If inflation is starting to cool down over the course of the year, it might be able to take its foot off the gas and ease its rate-hiking plan sooner than expected.

Last week, we explained that continued rate hikes from the Fed could lead to a real recession sometime in late 2023 or early 2024.

But as we explained, that doesn’t necessarily mean investors need to worry about the floor dropping out. The market is already pricing in a recession. So if the Fed keeps heading down that path, we believe a sideways market will continue for the next year and a half.

And here’s the thing…

If the Fed can take its foot off the gas sooner, a real recession might not even happen. Perhaps it can thread the needle and squash inflation without totally crushing growth.

If inflation keeps slowing down like it did in July, the Fed can ease its grip. And lower rates would once again encourage investment, which would allow growth to tick back up.

That brings us now, the final installment of our series on the similarities between the U.S. economy after World War II and today…

Mismatched supply chains and pent-up demand created inflation in the late 1940s. But then, the good times rolled. After a Fed-engineered modest recession in 1949 to cool inflation in the short term, companies started fixing supply-chain mismatches to meet a longer-lasting demand boom. 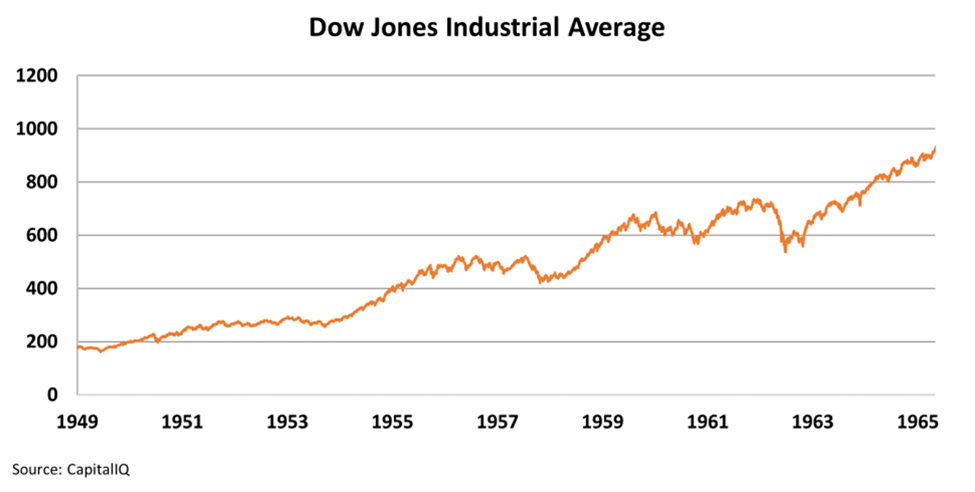 During these years, interest rates were tame but rising. Importantly, that tells us the market doesn’t need falling rates in order for stocks and the economy to rise.

And U.S. real gross domestic product (“GDP”) rose 100% over that time period—at a 4.7% annualized real growth rate. That’s the highest 15-year annualized growth rate in the past 70 years. For context, real GDP grew at an annualized rate of 1.7% over the past 15 years.

Corporate investing led to a growth explosion after World War II. From 1950 through 1965 (and actually even into 1970), the economy experienced a supply-chain “supercycle”…

Consumer-spending habits changed as folks began focusing on growing families. And companies adapted… They invested in themselves to address all the new demand.

At the same time, “Pax Americana” allowed these businesses to innovate and flourish. That’s the term for the world entering a mostly peaceful time after World War II.

Changing spending habits after the COVID-19 pandemic revealed the glaring need for a similar wave of investment. Companies are looking to invest in their supply chains. They’re looking to boost production to meet growing demand.

And while the birth rate isn’t what it was in the “baby boom” years after World War II, the U.S. still has solid growth characteristics relative to the rest of the developed world.

The U.S. has been the largest or second-largest destination for immigrants for the past 20 years, and it continues to be the preferred destination for workers seeking opportunity.

That underlying growth—as well as all the life changes that came out of the pandemic—continue to fuel strong demand, despite how one recession measure of looking at GDP is flashing red.

That’s why we believe this is a recession in name only.

And while Russia’s invasion of Ukraine and China’s saber-rattling toward Taiwan are getting headlines this year, the world continues to be a remarkably peaceful place.

In addition, the U.S. remains in a robust position at the heart of global innovation. And even better, the actions of Russia and China are creating a bigger opportunity for American businesses. After all, someone needs to take their places at the center of supply chains and in long-term investment and political partnerships.

This shift will create a virtuous cycle of more and more spending. We’re on the cusp of a new Pax Americana.

The U.S. economy is in the midst of another supply-chain supercycle. And for decades to come, it will only strengthen the country’s already dominant position in the global economy.

We’re coming out of the COVID-19 pandemic much like we did out of World War II.

American businesses are positioned to benefit from strong tailwinds around investment in the supply-chain supercycle, innovation to maintain economic dominance, and cost and geopolitical advantages thanks to the shale renaissance occurring under our soil.

We’re headed toward another 80 years of Pax Americana. And today, the only question is how quickly the Fed can manage inflation in the short term.

If it can do so quickly, the stock market could take off within the next six months. If it struggles, it could take as long as 24 months.

But no matter what, you want to own U.S. stocks now and in the foreseeable future.