Cybersecurity is becoming a bigger and bigger part of everyday life. As malware, ransomware attacks, and “hacking” become a bigger threat, defeating those that try to access our information is paramount. This company should be positioned to benefit from the cybersecurity wave, but as-reported numbers tell a different story.

With shares up massively since this company’s IPO, are investors wrong, or are they looking at different numbers?

On Friday, May 12, 2017, a woman in New York City picked up her morning coffee and walked to her job at a WPP company in downtown Manhattan. Around 8AM she sat down at her desk and fired up her computer.

After a few moments watching the little wheel on her screen spin, everything went black and a message popped up. A virus had attacked her computer, and this screen demanded a lump sum, payable via bitcoin, to unlock her content.

Of course, she wasn’t going to pay anything, and worst case she could get IT to bring her a new computer. She phoned IT, and while she waited, she leaned over to complain to her coworker who was just arriving.

When the coworker opened her computer, it was clear it wasn’t a one-off virus.

At that moment, IT answered the other side of the call, and immediately told the woman to unplug her computer from any network and shut it down completely. The coworker who was now looking at the same virus screen, was told the same.

Within an hour, as most of the east coast was arriving at work, the virus was appearing on thousands of computers across their company, and as it would turn out, companies all over the world.

What is now known as the WannaCry ransomware attack also hit Sberbank in Russia, Renault, the National Health Service hospitals in the UK, FedEx and Boeing in the US, and dozens of other companies.

In all, Europol estimates over 200,000 computers were infected across 150 countries. Over $130,000 was transferred to the attackers, in the form of bitcoin.

This not only shut down major corporations for days, it also affected medical services, and may have actually cost lives.

This isn’t the only attack in recent years, maybe just the most well-known. There have been others with names like Thanatos, MEMZ, and Locky. Every year there are stories about different virus attacks taking down banks, major firms, and thousands of individuals.

Ever since the first recorded computer viruses in the 1970’s, cybersecurity has been important, and in recent years as everything has become more connected it has become paramount.

Palo Alto Networks (PANW) is one of the firms trying to capture the financial benefits of this wave of cybersecurity. The company is focused on development of firewalls and intrusion prevention systems as well as general malware prevention products.

In fact, the company has been named a top-tier Network Firewall company by Gartner for almost an entire decade now.

However, looking at as-reported financials, it would appear that being a top-tier firm with major macroeconomic tailwinds has not resulted in profits for Palo Alto. In fact, the company has had negative return on assets (ROA) historically:

Palo Alto actually appears to be losing money, albeit at a slower rate each year. Ardent supporters of the firm and its technology might be surprised by that.

Since its IPO in 2012 though, shares of PANW are up nearly 4x, suggesting investors don’t care. It appears as though investors are betting on the future and don’t care that this company doesn’t make money.

It is possible that investors are betting on good technology rather than good fundamentals.

Or alternatively, investors realize the real story for Palo Alto—it has both good tech and good fundamentals.

Once the appropriate adjustments under UAFRS are made, it becomes clear that the firm is not just profitable, it has near-best-in-class returns:

Palo Alto had an Adjusted ROA of 44% in 2019. The firm is nearly 10x more profitable than the average company historically.

Although returns fell in 2018, they bounced back in 2019, pointing to sustained tailwinds to this business.

So investors buying this name aren’t betting on the company eventually becoming profitable, they’re betting on this company just continuing to do what it has done.

It doesn’t appear to be a tall hurdle to cross for the firm either, given all the cybersecurity risks people are facing in the world today. These broad tailwinds, coupled with an increasingly confident management team, point to the potential for continued upside going forward. 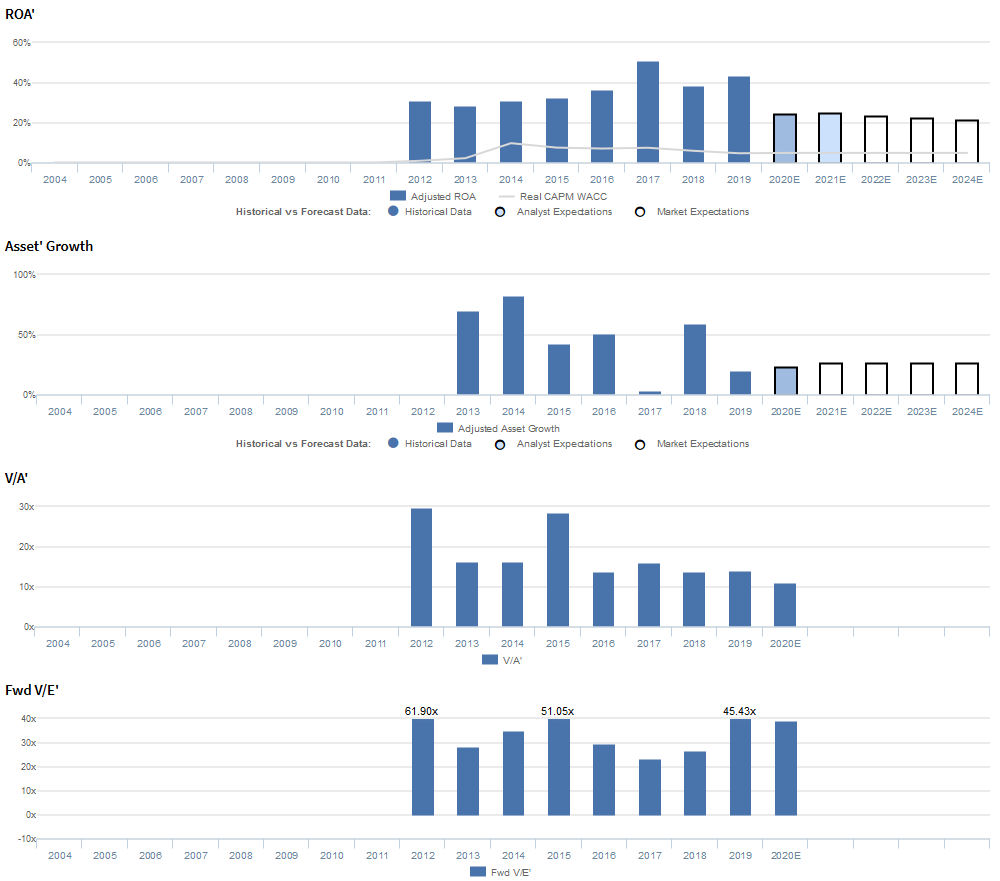 PANW currently trades above peer averages relative to Uniform earnings, with a 39.9x Uniform P/E (Fwd V/E′). Even at these levels, the market is pricing in expectations for Uniform ROA to decline from 44% in 2019 to 22% in 2024, accompanied by 27% Uniform asset growth going forward.

Analysts have similar expectations, projecting Uniform ROA to decline to 25% by 2021, accompanied by 23% Uniform asset growth.

Historically, despite increasing competitive pressures, PANW has seen generally improving profitability since its IPO in 2012, with Uniform ROA steadily rising from 29% in 2013 to a peak of 51% in 2017 before falling to 43% in 2019.

While improving its Uniform ROA, the firm has also aggressively expanded its operations, with Uniform asset growth ranging from 4%-83% in each year since 2013, as the firm continues to focus on increasing its market share in the rapidly expanding cyber security market. 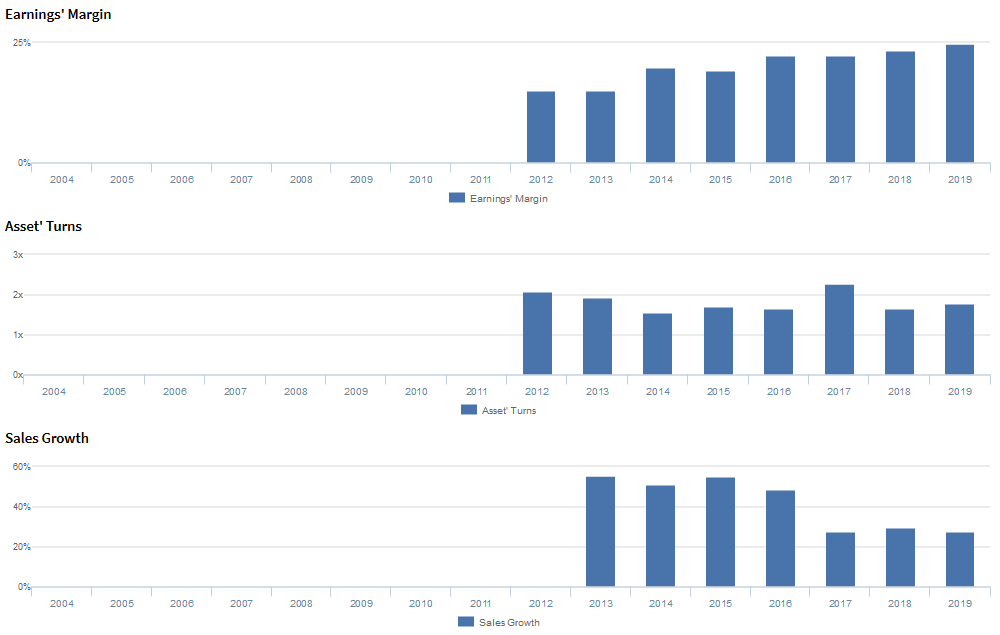 At current valuations, markets are pricing in expectations for material compression in both Uniform earnings margins and Uniform asset turns.

Valens’ qualitative analysis of the firm’s Q1 2020 earnings call highlights that management is confident that the proposed ASR represents the capital allocation strategy that returns value to shareholders, while allowing them sufficient flexibility to achieve their goal.

Furthermore, they may be exaggerating the potential growth from products, and they may be downplaying the short-term financial impact from the changing product mix related to Cortex and Prisma. In addition, they may be concerned about their ability to add capability to their firewalls and their focus on building zero-trust architectures designed around a mobile workforce.

Finally, they may lack confidence in their ability to sustain growth in attach subscriptions and NGS subscriptions.

As-reported metrics significantly understate PANW’s profitability. For example, as-reported ROA for PANW was 0% in 2019, significantly lower than Uniform ROA of 44%, making PANW appear to be a much weaker business than real economic metrics highlight.

Moreover, as-reported ROA has been negative in each year since its 2012 IPO, while Uniform ROA has ranged north of 28% over the same timeframe, misleading investors to believe the firm has been unprofitable, when in reality the business has maintained returns well above corporate averages.

As the Uniform Accounting tearsheet for Palo Alto Networks, Inc. (PANW) highlights, the Uniform P/E trades at 39.9x, which is above corporate average valuation levels and its own recent history.

High P/Es require high EPS growth to sustain them. In the case of Palo Alto, the company has recently shown a 23% Uniform EPS growth.

We take Wall Street forecasts for GAAP earnings and convert them to Uniform earnings forecasts. When we do this, Palo Alto’s Wall Street analyst-driven forecast is a 35% shrinkage in 2020, followed by a 23% growth in 2021.

Based on current stock market valuations, we can use earnings growth valuation metrics to back into the required growth rate to justify Palo Alto’s $225 stock price. These are often referred to as market embedded expectations.

The company needs to have Uniform earnings grow by 8% each year over the next three years to justify current prices. What Wall Street analysts expect for Palo Alto’s earnings growth is above what the current stock market valuation requires in 2021.

To conclude, PANWs Uniform earnings growth is above peer averages in 2020. However, the company is trading in line with peer valuations.