The defender of the internet’s walled cities

In 1099, the army of the Muslim Fatimid Caliphate thought they were secure behind the walls of Jerusalem. They were facing a Crusader army that had been decimated by hunger and thirst and were depleted from their siege of Antioch and journey inland.

The crusaders of the first Crusade sat outside the walls, preparing their siege towers to assault the city. However, amongst their defenses, the defenders had cleverly installed protruding heavy logs from the walls, like cactus spikes.

They understood that if even one siege tower breached the walls, the city would fall. The logs would prevent any siege tower from getting close enough for the invaders to be able to assault the walls and sack the holy city.

However, as the Crusader army approached and reached the walls, something very different happened… one group of crusaders started using those “spikes” as bridges for them to nail their siege towers to, to use to scale the walls.

The defenders were not able to hold off the assault and the city fell, with significant loss of life for the defenders and the civilians.

Most people don’t think of an assault like this as being particularly relevant in the modern era to learn from. Armies do not sit behind walled cities. Battles are fought through the air, in the sea and by mobile armies in the modern era.

But battles are also fought, by nations, and by individuals, in cyberspace. And there, the battles sometimes look much like they did in 1099.

A defender focusing on optimizing their walled city, constantly under siege. As the defenders innovate and find new solutions to protect their valuable data and systems, attackers are constantly reacting and improving their strategies.

One of the core defenses an individual, company, or government can use to protect against being hacked is a proper firewall. When a hacker attempts to invade by overwhelming a company’s infrastructure, through a DDos attack or through other efforts, a firewall can protect the network by providing a wall that the hacker cannot summit.

Just like any defense though, firewalls need to evolve. They have not stayed the same since they were first deployed back in the 1980s. And one of the core companies at the forefront of firewall technology and innovation is Palo Alto Networks (PANW).

Their success in defending against hackers has led to phenomenal growth in demand for their firewall and other offerings. This is why the stock price is 4 times higher than it was back in 2013, seven years ago.

However, firewall technology has been around for some time. And because of that, many people worry that even a company as innovative as Palo Alto cannot continue to innovate on this technology and the others they offer at a rate sufficient to keep up with the invaders. They expect Palo Alto’s defenses to become commoditized. The market is expecting Palo Alto to see returns fade significantly going forward.

But it looks like the market is wrong in pricing in the walls falling around Palo Alto. The company has strong fundamentals, and not only are the fundamentals strong, but management is also showing confidence about fundamental drivers that may enable them to continue to exceed market expectations.

For our institutional clients, we don’t just provide access to our Valens Research app. We also do bespoke research. We produce one-off deep-dive company analyses using all our tools, including Uniform Accounting, credit work, and our management compensation and earnings call analysis. We monitor their portfolios for potential Uniform Accounting signals to alert them. We provide custom datasets for quantitative analysis and provide aggregate analytics. We also help them create unique idea generation screens that are customized to their approach, using Uniform Accounting and our other analytics.

But for most of our institutional clients, the analysis that they find most useful, and almost universally ask for, is a quarterly portfolio audit and call with our analysts

Also, for those people who sign up to the offer before November 1st, we’ll include lifetime access to all of our newsletters, including our Market Phase Cycle™ and Conviction Long Idea List (a $6,000 value), for no extra charge, for as long as you remain a Valens Research app subscriber.

If you want to hear more about this offer or are interested in subscribing, feel free to reply to this email. I’ll forward your note to our head of client servicing. Or, feel free to reach out to Doug Haddad, the head of our client relations team, at doug.haddad@valens-securities.com or at 630-841-0683.

Market expectations are for declining Uniform ROA, but management is confident about demand, growth, and their competitive moat 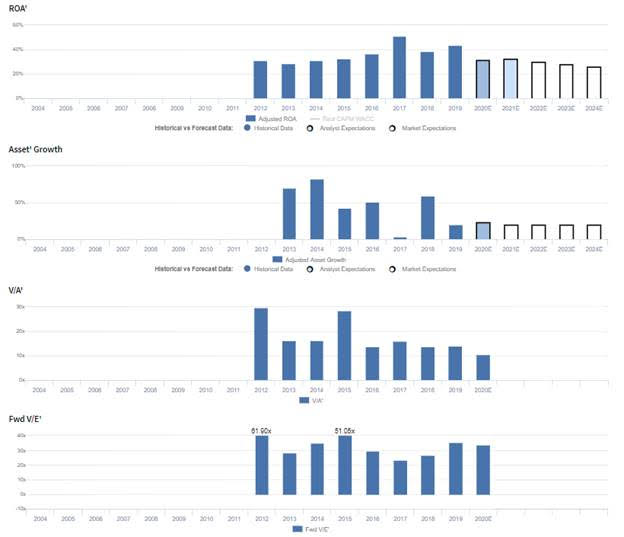 PANW currently trades above recent averages relative to UAFRS-based (Uniform) Earnings, with a 33.9x Uniform P/E. However, even at these levels, the market is pricing in expectations for Uniform ROA to decline from 43% in 2019 to 26% in 2024, accompanied by 20% Uniform Asset growth going forward.

Analysts have similar expectations, projecting Uniform ROA to decline to 33% through 2021, accompanied by 23% Uniform Asset growth.

Historically, despite increasing competitive pressures, PANW has seen generally improving profitability since its IPO in 2012, with Uniform ROA steadily rising from 29% in 2013 to a peak of 49% in 2017, before falling to 41%-43% levels in 2018-2019. While improving its Uniform ROA, the firm has also aggressively expanded its operations, with Uniform Asset growth ranging from 4%-83% since 2013, as the firm continues to focus on increasing its market share in the rapidly expanding cybersecurity market. 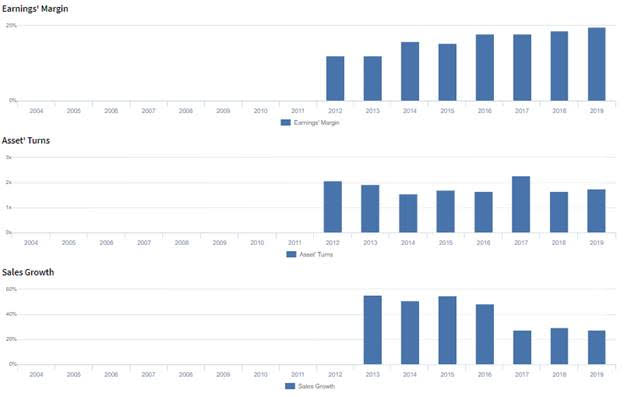 Historical improvements in Uniform ROA have been driven by expanding Uniform Earnings Margins, offset slightly by weakening Uniform Asset Turns. Uniform Margins have expanded from 15% in 2012-2013 to peak 25% levels in 2019. Meanwhile, after declining from 2.1x levels in 2012 to trough 1.6x levels in 2014, Uniform Turns improved to 2.3x by 2017, before slipping to 1.8x in 2019. At current valuations, markets are pricing in expectations for material compression in both Uniform Margins and Uniform Turns.

Valens’ qualitative analysis of the firm’s Q2 2019 earnings call highlights that management is confident they are growing faster than anybody else in the cybersecurity space and that they don’t see serious competition from other firewall vendors. Moreover, they are confident the lack of software-based competition allows them to be differentiated and reduce their speed of deployment, and they are confident all their customers have a growing IoT security need. Furthermore, they are confident they will see a revenue recognition mix shift in the coming years between the traditional firewalls and their software form factor.

Uniform Accounting metrics also highlight a significantly different fundamental picture for PANW than as-reported metrics reflect. As-reported metrics can lead investors to view a company to be dramatically stronger or weaker than real operating fundamentals highlight. Understanding where these distortions occur can help explain why market expectations for the company may be divergent.

As-reported metrics significantly understate PANW’s profitability. For example, as-reported ROA for PANW was 0% in 2019, significantly lower than Uniform ROA of 43%, making PANW appear to be a much weaker business than real economic metrics highlight. Moreover, as-reported ROA has been negative in each year since their 2012 IPO, while Uniform ROA has ranged north of 29% over the same time, misleading investors to believe the firm has been unprofitable, when in reality the business has maintained returns well above corporate averages.

Today’s tearsheet is for Coca-Cola. Coca-Cola trades at a material premium to market valuations. At current valuations, the market is pricing in Uniform EPS growth to be above market average levels, but in line with prior growth rates and forecasted growth rates. While the company’s valuations are well above industry average levels, their earnings growth is also at the higher end of peer levels, and the company has robust profitability and a safe dividend.